Photo credit: AFP Photo
Starker than expected slowdown in India’s 2Q GDP lowers the trajectory for the year. Real GDP slowed to 5% YoY in 2Q (first quarter of FY20) from 1Q’s 5.8%, below our sub-consensus and market expectations. The supply-side gauge, GVA slipped to 4.9% YoY from 1Q’s 5.7%. Apart from unfavourable base effects, much of slowdown was driven by domestic factors.

Weaker momentum in demand side of the economy was evident in high-frequency indicators, albeit the extent of pullback in activity came as a surprise. 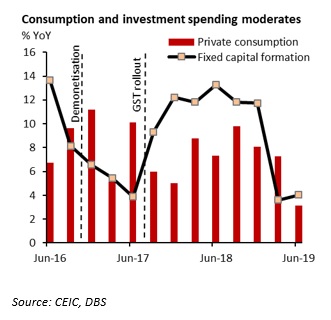 Contribution of the main domestic driver i.e. private consumption more than halved to 1.8 pecentage points, vs 4ppt in 1Q. Investment demand was nearly steady (YoY), whilst government’s final consumption eased. Net exports added to growth, as weaker exports were outdone by a slump in imports, improving the net balance.

On the supply-end, non-farm growth slumped to a five-year low, at 5.4% YoY, whilst the agricultural sector recovered from quarter before but was tepid at 2% YoY vs 1Q’s -0.1%. Industry growth halved from 3.4% YoY in 1Q to 1.7% in 2Q, led by a slump in manufacturing. Service sector activity also lost momentum but skirted a sharp correction. Core GVA i.e. GVA excluding agri and public administration, our preferred gauge for private sector momentum, eased to a two-year low. 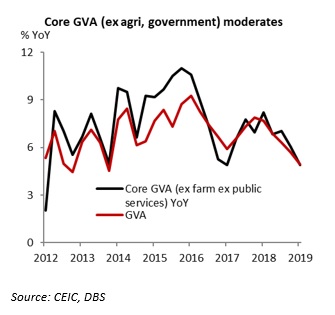 Policy intervention has been underway, by way of rate cuts and, more recently, government’s measures. On its part, the central bank has lowered the repo rate by 110bps in 2019, pushing banks to expedite transmission by encouraging linkage of lending rates to external benchmarks. Regulatory changes for banks and non-banks have also been undertaken. 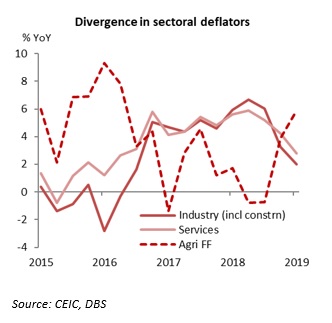 Recent policy intervention is directed at breaking the cycle of weak sentiments and weak activity. These measures are timely as the government looks to reverse the cyclical slowdown. These steps will continue to tread the thin line of taking corrective measures and tightening implementation gaps, but with minimum fiscal costs (see here). Another tranche of changes was announced were announced late Friday, consolidating public sector banks and making regulatory changes. 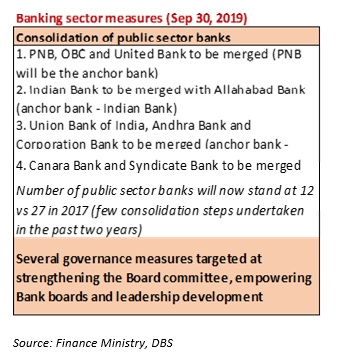 Factoring in a weak start to FY20 (Jun quarter was the first quarter), a return to favourable base effects in 2HFY20, and likelihood of growth returning above 6.5% towards end of the year, we revise down our real GDP growth forecast to 6.2% YoY vs 6.8% previously. The resultant negative output gap will keep inflationary pressures in check. Expecting the trajectory to improve in FY21, growth is likely to close in on 7% with a 6.8% growth pace.

For monetary policy, limited fiscal implications from the latest fiscal measures keep the door open for further easing. The latest RBI minutes from the August review saw the committee members accord high priority to limit weakness to growth and to jumpstart transmission. We retain our call for another 15-25bp cut at the October meeting, on the back of a weak 2Q GDP outcome. Odds of further rate cuts are rising as a preference to preserve policy space might be overridden by growth concerns. We now expect another 15-25bp rate cut in December. Challenging global conditions and a dovish FOMC add to the case for the RBI to take a growth supportive stance.

More supportive measures from the government are likely, preferring to remain sector specific. Fiscal costs will be kept to a minimum. However, if the slowdown seems entrenched, broader stimulus can be expected next year (see here).

For the markets, worries over fiscal support and new 10Y issuance will put pressure on old 10Y prices. Rest of the curve is likely to continue easing as rate cut expectations are set to return, thereby steepening the yield curve. USDINR continues to watch CNY movements and broader dollar bias, which at this juncture points towards further INR weakness owing to a weak global environment.