Chart of the Week: US wages and costs are spiking

In the middle of flight to safety, negative yields, inverted curves, and stable core PCE inflation, Fed officials should be taking note of other compelling data that show that wages and costs are rising. Latest productivity data from the Bureau of Labour Statistics, for instance, indicate that hourly compensation has surged this year, pushing up unit labour costs. Under ordinary circumstances, this report alone would set off warning bells of incipient inflationary pressure. We would at least hope Fed communication picks this up later this month. But if it does indeed do that, the markets (not to mention President Trump) will be highly displeased. Mood swings are likely to be par for the course. 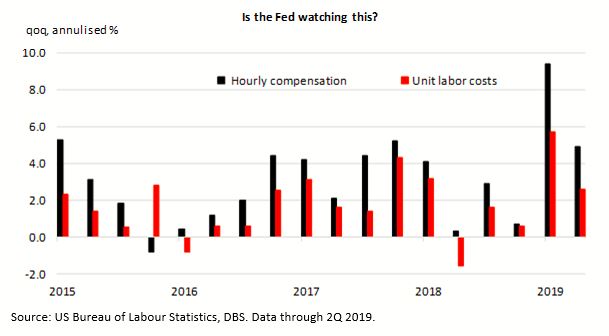 China: The revamped loan prime rate (LPR) should have somewhat lowered average lending rates. Loans and aggregate financing are projected to rebound. Likewise, M2 is expected to grow by 8.2%, compared to 8.1% in July. Looking ahead, the divergence between the LPR and benchmark lending rate will widen further. We also expect two more RRR cuts by end-2019. Borrowing sentiments should therefore see a revival down the road. Such loosening in the monetary environment will translate into some upward pressure on inflation. Pork prices should stay elevated due to the spread of swine fever. The CPI is forecasted to rise by 2.9% YoY, up from 2.8% in July.

Eurozone: In the face of weak data, the weight of further monetary easing is squarely on the European Central Bank. A mix of easing measures is on the cards – dovish forward guidance, 10bp cut in the deposit facility rate (currently at -0.4%), introduction of a tiered deposit scheme, (which will turn) LTROIII on attractive terms and signals that asset purchases might resume later in the year. The Council is split on the prospect of resuming QE, with the hawks cautioning against turning hostage to market expectations. Markets have priced in an aggressive easing move, with risks of disappointment if the ECB is perceived to have fallen short.

India: Routine mid-month data releases are due this week, of which August inflation and July industrial production will be of interest. August inflation is expected to hasten to 3.4% YoY vs FY-to-date average of 3.1%. Poor weather conditions likely hurt supplies, especially of perishables and vegetables. Retail fuel prices were marginally lower, even as INR weakened to the 71 handle in the month. But this will be offset by a continued rise in the precious metal prices, which feeds into the miscellaneous category. Industrial production, meanwhile, likely stabilized at 2.8% YoY, nearly steady from June. August trade deficit is likely to stay above USD14bn as a fall in exports is accompanied by weak non-oil non-gold import demand.

Malaysia: Industrial production index for July is on tap and Bank Negara policy meeting will also convene this week. The headline number is expected to see some improvement to 4.4% YoY, up from 3.9% in June. Latest trade figure which saw export sales surprised on the upside (+1.7% YoY versus consensus expectation of -2.5%). This was mainly aided by a healthy 4.5% rise in electronics sales, reversing the decline of 6% in the previous month. Interestingly, while Malaysia’s overall exports have been weighed down by the ongoing trade war between the US and China, some degree of trade diversion in specific clusters probably has benefited the country’s export performance. We expect such improvement to be manifested in the industrial production figure as well.

With some signs of stabilization, we reckon that the central bank will most likely keep the Overnight Policy Rate (OPR) unchanged at 3.00% in the upcoming policy review. After the insurance cut in the May policy meeting, whereby the central bank lowered the OPR by 25bps, the authority will likely continue to take a “wait and see” approach in the near term to allow the effects of the previous easing to cascade down the system. Inflation will pick up moderately due to base effects, but growth outlook remains challenging with strong external headwinds. In this regard, we continue to maintain the view that there is room for one more rate cut at the end of the year, pending the development of the trade war, as well as whether global central banks will continue to ease monetary policies.

Philippines: Trade balance might slightly deteriorated -USD3.38bn from -USD2.47bn in the previous month. We expect slight exports improvements to 4.4% YoY from 1.5% YoY, while imports could start to pick up, contracting at 3.7% YoY from 10.4% YoY. We maintain our view that Philippines might continue to cut policy rate before year end to support growth slowdown.

Taiwan: August trade numbers are due this week. Export growth is likely to hover around zero for the third consecutive month, at -0.2% YoY. This, however, is a notable improvement compared to the persistent contraction through the Jan-May period (-4.3% on average). The overall demand outlook remains sluggish, in the context of global growth slowdown and trade war escalation between China and the US. That said, Taiwan’s exports to the US have been on the rise, as Taiwanese firms shifted from offshore to onshore production to serve the US market against the backdrop of trade war. Meanwhile, exports of semiconductors and other electronics components have showed some tentative signs of a pickup since June, as the 2H peak season arrives. In addition, Chinese firms may have accelerated export shipments before the new round of US tariffs (USD 125bn, 15%) took effect in September. This should have driven up the imports of intermediate goods from Taiwanese suppliers, albeit temporarily.