China: More easing in the pipeline

The reduction was a response to persistent weakening of economic activities. We expect PBoC to lower RRR by another 50-100bps in Q4.
Nathan Chow, Philip Wee, Duncan Tan09 Sep 2019

Photo credit: AFP Photo
On 6 September, the People's Bank of China (PBOC) announced a 50bps cut in the banks’ reserve requirement ratio (RRR), effective 16 September. The authority also cut 100bps for some city commercial banks, effect in two phases on 15 October and 15 November respectively. The change is in line with our expectations (see “China: Slowing growth; more stimulus to come”, August 15). The resultant injection of RMB900bn is the largest so far in the current easing cycle.

The cuts will partially offset the tightening impact of upcoming tax payments in mid-September and front-loading of local government special bonds issuance in Q4. As of August, local governments had used up more than 90% of their 2019 new debt quotas. Early assessment on how much debt needs to be issued next year is already in progress, three months ahead of the usual schedule. Part of the quota will be allocated in advance to ensure funding availability at the beginning of 2020, according to the State Council's meeting chaired by Premier Li Keqiang last week. Given that commercial banks are the main buyers of LG bonds, the RRR cut should help to supply liquidity.

The reduction was also a response to persistent weakening of economic activities. In July, industrial output growth slowed markedly to 4.8% YoY, the weakest pace since February 2002. Infrastructure investment also eased alongside housing investment. Retail sales remained weak due to growing consumer caution, most evident in slumping auto sales and property-related spending. That was followed by weaker-than-expected bank lending and the return of deflation at the producer level. The outlook will likely deteriorate further for the remainder of the year owing to trade war headwinds. 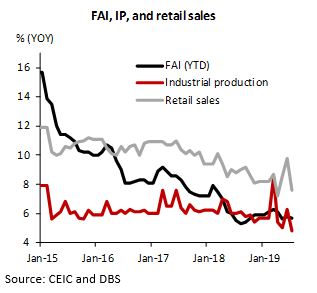 Echoing earlier cuts, the latest move was aimed at supporting demand by funnelling credit to smaller firms. Prior to the adjustment, PBoC had injected more than RMB3.6tn in net liquidity through seven reserve cuts since early 2018. However financing costs for the real economy failed to decline. The weighted average lending rates have remained broadly unchanged in the past three quarters (5.66% for Q2 2019; 5.69% for Q1 2019; 5.64% for Q4 2018). M2 also slowed to 8.1% in July, its lowest level since December 2018.

While the recent introduction of new loan prime rate (LPR) will help lower funding costs, any near-term impact is expected to be limited. Rather than outstanding loans, the LPR pricing only applies to new loans in order to minimise the pressure on banks’ NIMs. Meanwhile, the LPR coverage will only gradually expand: banks are mandated to have 30% of new loans priced off the LPR by end-September, 50% by end-December, and 80% by March 2020. 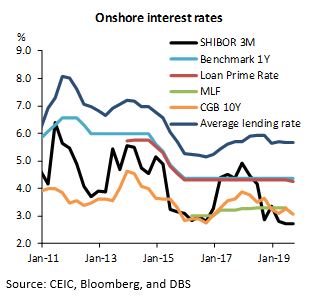 The recent move by China Banking and Insurance Regulatory Commission to inspect banks’ property loans as lending to property companies still account for an excessive proportion of overall credit. PBOC has also instructed lenders to control growth in mortgage loans given lingering concerns about leverage and housing bubbles. With the Trump administration imposing new tariffs on 1 September, and threatening more measures from October and December, we expect PBoC to lower RRR by another 50-100bps in Q4.

We do not expect the incoming RRR cuts to have an immediate impact on the CNY. The CNY has already depreciated from 6.70 to 7.20 vs USD during the tit-for-tat tariff war over the past 4-5 months. With effect from September 1, US President Trump has effectively imposed tariffs on all Chinese goods totalling USD550bn. In retaliation to China’s tariffs on USD75bn of US goods, President Trump intends to increase tariffs by another 5% from October 1. The RRR announcement was targeted at cushioning China’s economy from the re-escalation in China-US trade tensions. 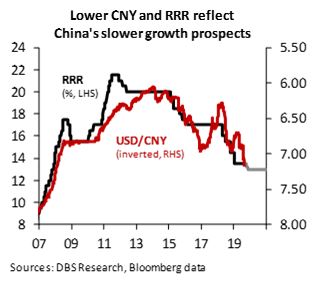 The first round of negotiations conducted in Shanghai in late July had ended in mutual criticisms, only to be followed by the CNY’s depreciation past the psychological 7 level in August. While relieved that trade talks have not broken down, expectations remain low for any significant breakthrough that could result in a trade deal. Any progress leading to a tariff ceasefire would, however, be welcome.

We do not expect the announced RRR cuts to have a material impact on onshore money market rates or government bond yields. Thus far, most of the adjustments to US tariffs and softening economic outlook has been through the currency. Interest rates have been quite stable, and we expect that to continue. A key reason, PBOC still seems to be reluctant to pursue aggressive easing, for fear that it would increase the build-up of leverage in stock and property markets. Consequently, easing measures have been prudent and targeted. Notably, PBOC did not follow the Fed in cutting policy rates (1Y Lending rate) but have instead opted to gradually lower corporate borrowing costs via interest rate reform (new LPR). 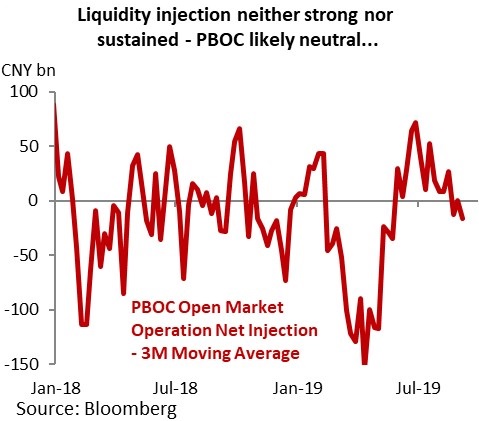 China Government Bond (CGB) yields can fall alongside global yields, but the pace would likely be much smaller. This could be why foreign inflows have been much weaker this year vs 2018, despite index inclusion in April. Though there is little scope for capital appreciation, CGBs are attractive for their relatively high yields. At present, FX-hedged and unhedged 10Y CGB yield a massive 100-150bps more than similar-tenor US Treasury. 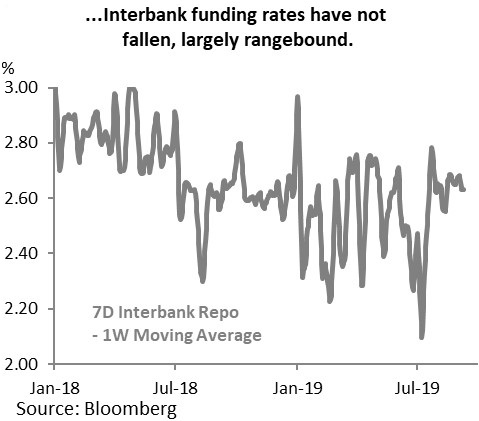