Oil prices surged on Monday in reaction to the weekend’s drone attacks on Saudi Arabia’s oil facilities, amongst the world’s largest, which disrupted the country’s crude production and refining capacity considerably. Saudi Arabia is India’s second largest supplier of crude and cooking gas (see here for implications). Half of the production disruption is expected to be restored by Monday, while full recovery would likely take a few weeks. In the interim US and Saudi Arabia plan to tap their reserves to meet short-term demand.

It remains to be seen if Monday’s price surge sustains. If it does, it could complicate the economy’s macroeconomic outlook, with a telling impact on external balances. High oil prices risk widening the net oil deficit as well as the current account gap. We estimate that a 10% rise in crude prices widens the current account deficit by 0.4-0.5% of GDP.

For CPI inflation, the direct impact of higher crude prices is modest given the configuration of the price basket, but despite this a 10% rise in global crude prices stands to lift headline CPI inflation by 20-30 ppt, assuming a complete pass-through. Impact will be higher if we include the second-order pass-through of high transport costs feeding into manufacturing/ food costs. On the fiscal end, the government has prudently held back from either reinstating subsidies or going beyond modest excise cuts when oil prices surged last year. 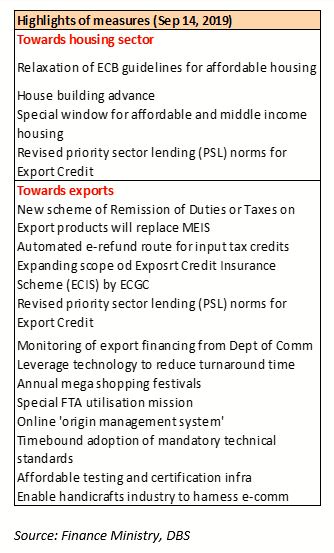 As was evident in the earlier tranches, the government continues to steer clear of outright fiscal stimulus, instead focused on providing directed support to the stressed sectors and seeking an equal hand from private sector funds to meet the financing needs.

These measures will entail modest fiscal costs – a) revenue foregone on account of new export scheme at ~INR50-100bn (difference between new and old scheme); b) government’s share in the funding corpus for housing amounting to INR100bn (0.05% of GDP); and c) small outlay for export credit insurance. Industry players are likely to be encouraged by these measures, with real estate participants hoping for few follow-up demand side measures to draw in home-buyers.

April-August 2019 trade deficit narrowed by 12% YoY to USD 73bn, as a fall in exports (-1.4% YoY) was accompanied by weak import growth (-5.4%). Most export categories either declined or slowed on the year, barring electronics and garments. Electronic shipments have posted strong double-digit growth last year and this year, benefiting from a change in the composition of product-lines from intermediate to finished products (led by consumer and telecom instruments etc.). The smaller quantum of these exports, however, continues to keep the net electronic balance in a sizeable deficit. On imports, non-oil non-gold imports, which reflects private sector activity, declined 5.6% in first five months of FY20 vs 5.6% annual rise in FY19.

Service exports rose at a healthy clip of 9% in April-July 2019 despite base effects of a strong 29% rise in the same time last year. The trade surplus is steady vs last year, despite an increase in protectionist trade tendencies.

At an aggregate level, a narrower trade deficit bodes well for the FY20 current account outlook. We expect the deficit to stay at -2% of GDP this year, with downside risks to goods export growth from tougher global trade developments but offset by low oil and weak domestic-demand driven imports.

August inflation rose 3.2% YoY vs market expectations of 3.3-3.4%. The breakdown was along expectations, as food inflation accelerated on higher perishables, but was offset by weaker fuel costs. The most notable gain in the basket was on account of higher gold prices, which contributed to a third of the headline inflation last month. Core inflation i.e. ex food and fuel, was steady at 4.3% YoY, and could have been potentially weaker if not for the spurt in the metal prices. 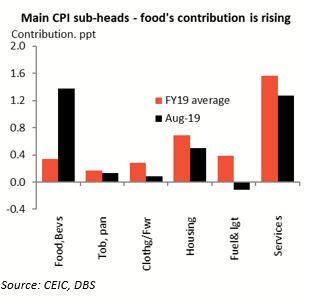 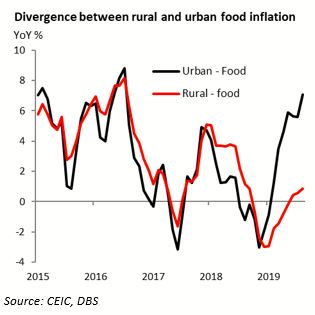 Divergence between rural and urban food inflation persisted into August. This was partly weather-driven supply disruptions, along with a seasonal rise in perishables i.e. vegetables, pulses and fruits which was much more pronounced in the urban areas than rural. While a relief for spending on lower food, weak returns add to concerns for an already skewed agricultural terms of trade i.e. returns on non-food items vs food.

Policy outlook: With FY20 CPI inflation averaging a benign 3.1% vs the medium-term target of 4%, monetary policy is likely to stay accommodative. The last RBI Minutes had seen the committee members debate over the need to ease more vs available policy space. However, a negative output gap following weak 1QFY20 growth numbers, sub-target inflation and built-up in fiscal slippage risks, suggest that monetary policy will draw the growth cart for rest of the year. We look for 40bp cut in rest of FY20, for rates to near bottom at 5% in the current cycle. Policy transmission (deposit and lending rates) has been gradual but gathered momentum in the past two months, expedited by a sustained surplus liquidity and RBI’s dictum on banks to link all new floating rates for personal/retail loans and floating rate loans to MSMEs, to repo rates or external benchmarks from October.

July industrial production rose 4.3% YoY posing an upside surprise compared to consensus at 2.3% YoY and us at 2.8%. Given the choppy nature of these prints, the three-month trailing average shows that production trends have stabilised at lows. To call an uptrend, more data points will be important, with an eye particularly on capital goods and consumer durables that have endured a weak run in the past seven and four months respectively. 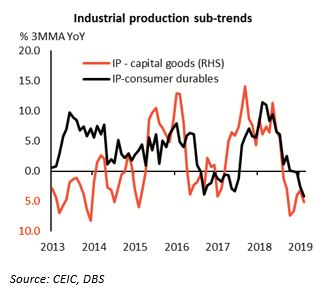 FY20 fiscal trends have come under the scanner. The fiscal deficit target in April-July totalled 77% of the budgeted estimate for the year. While consistent with recent years’ trend, this year’s deterioration was not as troubling as FY18 and FY19. This might also be because elections held in 1QFY20 which slowed disbursements, helped to contain the extent of fiscal slippage at the margin. Nonetheless, on the year the math is tight and limits the space for an outright fiscal stimulus. Slow growth and below target tax revenues (direct and indirect) pose slippage risks. The windfall from RBI transfers while sizeable, the additional revenue boost will be limited to 0.3% of GDP, above the budgeted INR900bn (i.e. 0.4% of GDP). This might be enough to plug close to half of the revenue shortfall, but still requires a cutback in expenditure if targets are adhered to. At the margin, if growth disappoints starkly, fiscal target might be adjusted up to accommodate additional spending.