Chart of the Week: China’s war on pollution

Six years after declaring war on pollution, China is making progress. The use of coal has been steadily declining, while natural gas and renewables have both increased their share of the country’s energy mix. According to the Ministry of Ecology and Environment, the average level of PM2.5 dropped by 9% in 2018 as compared to 2017. 120 cities met national air quality standards during January-May 2019, an increase of 20 cities from last year. Certainly, Beijing has every reason to further reduce emissions and promote low-carbon development. A recent research found that air pollution could shave an estimated USD38bn (0.66% of GDP) off the Chinese economy each year in the form of early deaths and lost food production. However, policymakers will have to walk a fine line between cracking down on pollution and stabilizing growth after August data showed the weakest industrial-output expansion in 17 years. 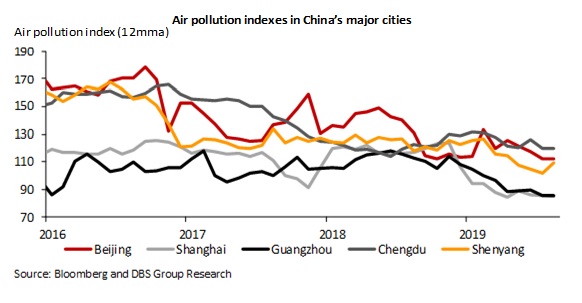 Hong Kong: Trade figures should have stayed weak in August due to external uncertainties. Both outward and inward shipments, which contracted 5.7% YoY and 8.7% respectively in July, are forecasted to further weaken to -10.0% from the intensified trade war. Imports are also expected to slump further due to weakening domestic demand amid local instability; retail sales value recorded the sixth YoY decline of -11.4% in July.

Singapore: CPI inflation and industrial output figures will be on tap this week. The headline price barometer is likely to surprise on the downside. Expectation is for a reading of a mere 0.1% YoY, down from 0.4% previously. Beside a subdued external inflationary environment, domestic price pressure has been exceptionally weak amid slowdown in growth momentum. The economy shrunk by 3.3% QoQ saar in the second quarter and output gap has turned increasingly even more negative. This has prompted our view that inflation could potential dip to near zero and full year inflation will now average just 0.5%, which is at the lower limit of the official forecast range of 0.5-1.5%.

Industrial output for August will likely remain in negative territory at -0.6% YoY. While this is a tad worse than the decline of 0.4% previously, this is still a significant improvement from an average -3.3% in the previous quarter. The electronics cluster could continue to underperform but there are tentative signs of a potential turnaround in this cluster judging from the figures in global semiconductor equipment billings and semiconductor shipments. The chemical and biomedical clusters could also provide some much-needed impetus to an otherwise lackluster manufacturing sector. Indeed, global economic conditions have been exceptionally challenging for the manufacturing, with trade war and electronics downcycle weighing on demand. And such doldrums will likely continue in the near term given the uncertainties in the external environment.

Malaysia: Inflation for August is expected to remain stable. A forecast of 1.5% YoY has been penciled into our forecast. This is just a mere 0.1ppt higher compared to the previous month, and we continue to believe that inflation will likely remain range bound between 1.5-2.0% in the coming months. As effects from the post-election policy changes, including the zero rating of the GST, subsidies for petrol and removal of toll charges fade from June onwards, inflation has reverted to a more normalised path. This would allow the central bank to shift its attention towards growth. Although GDP growth has accelerated in 2Q19 (+4.9% YoY), that came largely because of a one-off tax refund for consumers and low base in the same period last year. We expect growth momentum could ease in the coming months and this is where we think there is room for monetary policy to turn a bit more accommodative. We continue to expect that Bank Negara would lower the Overnight Policy Rate by 25bps in the next policy meeting in November.

Philippines: Given steadily easing inflation and significant growth slowdown in 2Q19, we think BSP might follow through with another 25bps policy rate cut to 4.0% this week. Inflation eased to 1.7% in August from 2.5% in July, resulting in an average of 3.1% YTD. Inflation is likely to decelerate further until October this year before picking up slightly, as base effect of high inflation last year ends in November. In addition, growth slowdown seems to continue through this quarter as most high frequency indicators are still pointing south, while the Philippines Peso still recorded positive gain this year.

Taiwan: Industrial production (August, today) is expected to show a modest 1.1% YoY increase, maintaining the marginally positive reading for the second consecutive month. Industrial production and exports have been outperforming export orders since mid-2019. While overseas demand remains weak amid global growth slowdown and the rise in trade protectionism, onshore industrial activities have been expanding, thanks to the repatriation of China-based Taiwanese manufacturers. This should bode well for the GDP growth performance in 2H19. In view of a stable growth and inflation outlook, the central bank (CBC) left the benchmark discount rate unchanged at 1.375% at last Thursday’s meeting. We continue to expect the CBC to hold rates steady in the rest of this year and in 2020, while see upside risks to our GDP growth forecasts currently (1.9% for 2019, 1.8% for 2020).

Thailand: The Bank of Thailand last cut benchmark rates by 25bps in August, unwinding December’s hike and taking the policy rate to within a striking distance from the global financial crisis low. Sharp slowdown in 2Q growth coupled with THB outperformance has perturbed the central bank, in midst of an already tough trade environment. The risk of missing the inflation target has also added to the cause of further easing. While policymakers might wait and monitor impact of last month’s cut and not move on rates immediately, we do scope for a cut in December. Thereafter, further cuts are unlikely in a hurry as the BOT seeks to balance the need for support with high household debt levels, constrained policy space and financial stability risks.