The Bank of Thailand left the benchmark rate unchanged at 1.5% on Wednesday, in a unanimous decision. Rates are now within striking distance of the global financial crisis low of 1.25%.
Radhika Rao25 Sep 2019

Photo credit: AFP Photo
The Bank of Thailand left the benchmark rate unchanged at 1.5% on Wednesday, in a unanimous decision. Rates are now within striking distance of the global financial crisis low of 1.25%.

Underscoring their dovish bias, growth and inflation forecasts were cut sharply – 2019 GDP growth is now seen at 2.8% (vs 3.3% previously) and 2020 at 3.3% (vs 3.7%) next year. Headline inflation is seen at a moderate 0.8% this year and 2020’s maintained at 1% (vs BOT target at 1-4%). Export growth forecast for this year has been lowered to negative pointing to the impact of a tougher global environment (see here) in midst of trade conflicts and protectionist overtures by trading partners. 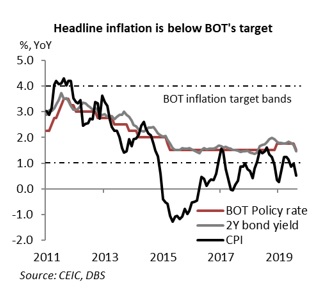 Apart from the economy, the strong baht continues to be a policy concern, as the strength is viewed as inconsistent with weakening economic fundamentals. On effective exchange rate basis, baht is the strongest since late 90s. With rate cuts likely to be a blunt instrument in taming safe haven flows and ultra-low rates also posing financial stability risks, it is increasingly likely that policymakers might consider piecemeal macroprudential measures instead.

Policy outlook: We based our call for a pause today on the grounds that the central bank would prefer to monitor more data to ascertain the extent of weakness in second half of the year. A cut in December is still likely (our base case) if growth disappoints in 3Q which will make the anticipated 2H recovery elusive.

A back-to-back cut today (after August’s move) might have reinforced their intent to address baht appreciation pressures, but the 1% gain in the currency (vs USD) since the August cut, demonstrates the limited impact of the policy stance on the currency markets. Non-rate measures till date have helped tame THB volatility but has done little to reverse its trend. It is, however, clear from the official rhetoric that draconian capital controls are not on the anvil. Instead, the BOT might prefer to continue down the line of macro prudential measures by way of relaxing norms on outflows, encourage Thai investments offshore etc. This is particularly as the USDTHB approaches the psychologically crucial 30.0 level. Intervention has yielded little result, with any aggressive approach on this end to attract the ire of the US Currency report review and reassessment of the GSP benefits.

As monetary policy rate nears historical lows, the government has also stepped into with stimulus measures. Last month’s stimulus measures were timely and expected to help boost short-term consumption, while businesses are expected to avail of cheaper credit and tax deductions to step up capex spending. In a bid to attract investments displaced by global trade tensions, the government laid out incentives by way of a 50% corporate tax cut for five years conditional on the foreign companies investing USD32mn within the next two years and application for approvals made by next year. Assurances were also given of additional tax breaks for construction of training centres and worker development programmes. While positive, we don’t expect a material benefit to 2019 growth, which we forecast at 3% with downside risks as growth feels the drag from a tougher global trade outlook, delay in the passage of the FY20 Budget and weaker capex/manufacturing cycle.

In all, we retain our call for a 25bp cut in late 2019 before rates plateau as the BOT seeks to balance the need for support with high household debt levels, constrained policy space and financial stability risks. Structural drags from ageing and need for social sector support also limit the extent to which rates can be lowered, which are detrimental to the banking system and savers at large.