BSP delivered another 25bps rate cut, with a cumulative of 75bps cut and 200bps RRR cut so far. We see rooms for further easing. We remain positive on Philippines equity and neutral on govvies.
Masyita Crystallin27 Sep 2019

BSP delivered the third consecutive rate cut while keeping the reserve requirement ratio (RRR) at 16%, resulting in a cumulative of 75bps cut this year. Governor Diokno hinted that, given the significantly lower inflation prospect, there are rooms for further easing. BSP downgraded its inflation forecast to 2.5% in 2019 on the back of lower oil and food price.

The cumulative 75bps easing this year is only partially unwound BSP’s 175bps aggressive increase last year. BSP was among the most aggressive as inflation soar and reached a multi-year peak of 6.7% in Sep-Oct18. There is more room for rate cuts in the current context, in our view. We see another 50bps in cuts in the coming quarters.

External headwinds to trade have caused growth to slow. Growth disappointed in 2Q recording 5.5% from consensus estimate of 5.9%, the weakest in 17 quarters.

Budget impasse earlier this year was the main cause of the growth slowdown alongside with higher global headwinds. In addition to the backloading of expenditure due to budget impasse, overall government infrastructure spending this year was cut by PHP95.3bn. This will negatively impact growth given that government infrastructure was the main driver of growth in the last three years.

Moreover, despite significantly lower inflation this year, consumption has slowed in 2Q. This slow down tallies with retail 1H earning results which recorded a double-digit contraction. Industrial production growth is still in negative territory.

On a positive note, we think that growth might rebound in 2H although it is unlikely to rise above 6%. Our rebound scenario is based on three major factors. 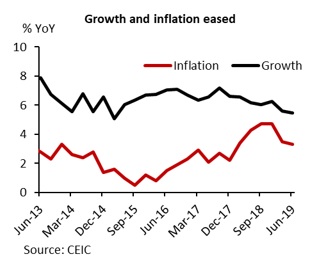 First, an acceleration of the government expenditure, growing at 3.4% in July and 8.8% in August, will support growth after 3Q.

Ample fiscal space could serve as growth buffer, budget deficit reached 0.5% of GDP so far in 1H, far below the 3.4% target in 2019. It is narrower than budget deficit at 2.5% in the same period last year.

In addition, if the resolution to extend 2019 budget validity until Dec20 is approved, additional infrastructure spending will support growth in 2020 as well. Starting this year, Philippines has started using a cash-based system, in which budget could only be disbursed in the corresponding year. With this budgeting system implemented, the 4-months budget delay would, not only lower the amount of infrastructure spending this year, but also cause further delay as infrastructure projects has missed the dry season window in 2Q.

Second, trade balance seems to have bottomed. Nonetheless, further action or comments from Trump and unexpected reactions from China could alter this trajectory. 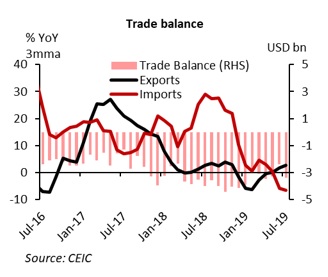 Inflation is likely to remain at bay further this year, supporting private consumption. Having stabilized from the peak in Sep-Oct18 to 1.7% in Aug19 this year, inflation averaged 3.1% YTD vs. 5.2% or all of 2018. Soft domestic demand and high base effect from last year are likely to keep inflation around 2% until YE19.

There are several risks to this outlook. First, the government plan to increase the anti-dumping duties on rice planned for October might inflationary but is unlikely to push inflation above 2.2% for the rest of the years (rice weight in CPI is 9.6%). Second, volatility in the oil price due to geopolitical strain in the Middle East could be inflationary as well. Last, the impact of swine flu. We think that the impact of swine flu might be minimal because meat, including pork, poultry and beef, only accounts for 6.2% of the CPI basket or half of the weight of rice. Moreover, the substitution effect between pork and other types of protein should soften the impact to overall CPI.