With the policy rate now at the lowest since 2010, questions are arising on how low it can go?
Radhika Rao01 Oct 2019

Photo credit: AFP Photo
The Reserve Bank of India has front run the regional central banks with a cumulative 110bps cuts in the repo in 2019. A favourable inflation profile and weakness in growth indicators necessitated an accommodative policy stance. With the policy rate now at the lowest since 2010, questions are arising on how low it can go?

A rate cut is likely at this week’s policy meet

The RBI monetary policy committee (MPC) meets this week to decide on rates. 2Q (1QFY20) growth numbers released after the August rate decision, disappointed as the actual outcome undershot official projections by ~80bps. This will lead to a downward revision in the central bank’s official GDP projections, which pegged full-year growth at 6.9% (vs market at 5.8-6.5%). 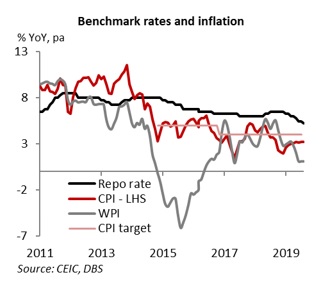 Inflation has stayed below target, with a sharp cut in corporate tax rates while positive for growth, has increased fiscal slippage risks at the margin. Of the 40bps cut we expect in this quarter, half is likely this week, also noting the significant variation in market estimates from 5.15% to 5%. This cut, in our view, will reflect the RBI’s decision to take the middle path – be growth-oriented with an accommodative stance, but also reserve some firepower as fiscal purse strings are being loosened concurrently. A dovish bias will also help undo the rise in bond yields witnessed post-tax cuts, particularly in the short end of the curve. We expect a similar-sized cut in December taking the repo rate to 5% by end-2019. A decision by the MPC to, instead, frontload the cumulative 40bps cut this week will not surprise either.

Assuming our rate call for 4Q19 plays out, the repo rate will stand at 5% by end-December 2019. Where to next?

Basis few assumptions, we highlight how far we are from levels considered as a terminal rate. We use the Taylor’s rule as a thumb rule to estimate the approximate room for further cuts given prevailing and one-year hence, growth and inflation levels. These calculations are sensitive to the assumption of the real interest rate, which will be a ‘constant’ variable.

In the past, Indian policymakers maintained high real interest rates to ensure financial stability and keep deposit returns attractive. This is, however, being questioned considering a sliding savings rate in the past 5-6 years and studies suggesting that real incomes rather than interest rates have been a more important driver for higher savings.

Our base case is closer to b) where we expect growth to gradually shift back towards 6% in the second half of FY20 and maintain the pace heading into FY21. Our forecast for inflation over the time horizon reflects few months of 4%+ inflation and then heading down into FY21 as base effects again turn favourable. Hence, we continue to watch the RBI MPC’s leaning to add to our current forecast of the repo rate at 5% by December 2019.

Apart from purely macro assumptions, the role of the government’s fiscal stance (to a greater extent) and global developments (at the margin) will also influence the central bank’s policy path. In recent weeks, the government has warmed up to fiscal stimulus, with an eye on spurring investments and industrial growth. If this persists and the stimulus steers clear of directly boosting consumption, we expect the RBI to cut rates, albeit, gradually. A clear shift towards consumption stimulus, however, might but the RBI on the defensive. By most measures (except the bearish assumption), beyond December 2019, we are about 2-3 rate cuts from reaching the terminal policy level.

Separately, the RBI issued the draft report for liquidity management framework last week. Key proposals by the panel were –

a) The current system of ‘corridor’ around the repo rate will continue, retaining present spreads

b) Call money rate i.e. Weighted Average Call Rate (WACR) to continue as the target rate and stay close to the repo rate

c) Systemic liquidity will be targeted to stay at deficit around 0.25-0.5% of Net Demand and Time Liabilities (NDTL); this translates to a deficit of ~INR250-500bn

d) Recommended tools –
i) Deficits to be offset by liquidity-injection measures (such as OMO purchases or buy-sell FX swaps)
ii) Persistent surplus to be neutralised by durable liquidity-absorbing operations (such as OMO sales or sell-buy FX swaps).

e) As an alternative to OMO purchases, longer-term variable rate repos, longer than 14 days and up to one-year tenor, be considered as a new tool for liquidity injection if system liquidity is in a large deficit.

We make a few observations following the report. Firstly, there were no large departures in the liquidity framework from the current system. This runs parallel to RBI Governor Das comments in June where he expressed the need for a change.

Secondly, market participants had expected the liquidity stance to be in cohesion with the monetary policy stance – i.e. a rate-cutting cycle to be accompanied by surplus liquidity which will ensure timely and effective transmission. The report instead, suggests that a shift to a surplus balance will occur when deemed necessary and if warranted by financial conditions, rather than policy stance. 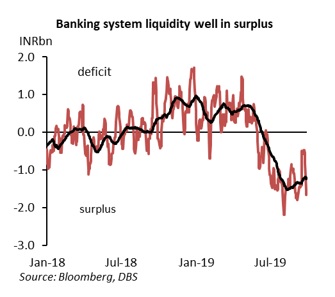 Third, in the current circumstances, we reckon that financial conditions will be considered as tight given sticky borrowing costs for non-banks and other credit-deficient segments. This backs the case for surplus liquidity (has been the case since June) to be maintained to ensure rate cuts percolate through the system. While GST and tax related outflows might cause temporary swings, we expect the unstated bias to stay towards keep financial conditions accommodative. Finally, the use of variable term operations rather than OMOs will squash expectations of further support for bonds. Nonetheless, the larger aim to ensure transmission and keep yields low, we reckon will keep the OMO option on the table, particularly during adverse rate movements.

For the markets, steepening bias for the INR sovereign bond curve will continue. The short-end of the curve is held down by rate cut expectations, but longer-end faces bouts of fiscal-related concerns.

Short-term wariness was allayed after the 2HFY20 borrowing plan was maintained with a gross issuance of INR2.7trn – i.e. 38% of the full-year target. The nitty-gritties involve – auctions to be spread over 17 weeks and will conclude by late-January, instead of running until early-March as in the past. 60% of the issuance will be in the 5Y to 14Y bucket, heavier at the higher end of the duration. Less than 5Y at ~7% of total.

An unchanged borrowing schedule provides temporary relief to the markets. Monthly fiscal math will be watched for direct and indirect tax revenue trends which will become clearer in 4Q19 and dictate the need for a wider fiscal deficit. Apart from tax revenues, the math might require renewed push towards disinvestment, other support (dividend payout, subsidy rollovers etc) and expenditure curtailment. Prima facie, we see risks of a miss to the FY20 fiscal deficit target to -3.5-3.6% of GDP vs budgeted -3.3%. Reliance will be on the INR debt markets, as the maiden offshore bond issuance has been ruled out this year.

A silver lining for the debt markets is a signal that the authorities are seeking the inclusion of Indian papers into the key global bond indices, over the next two years. The FPI investment limit into government securities might be raised as a precursor. Bloomberg LP has reportedly offered to assist the authorities to navigate the process for gaining such inclusion. Being a part of such will help not only draw the interest of not only active funds, but also passive players who are mandated to track and allocate monies according to the benchmark indices. FPI limit in government securities stands to rise to 6% of outstanding bonds by 2020, 2% for state debt and 9% for corporate bonds.

As of 30Sep, about 70% of the limit into government securities has been utilised (see table below).

The 2Q current account deficit widened to USD14bn i.e. 2% of GDP from USD4.6bn in 1Q (0.7% of GDP). A wider trade deficit accounted for bulk of this larger gap, also tracking seasonal patterns. Service balance eased marginally, while remittances improved in the quarter. Stronger capital inflows helped lift the 2Q balance of payments to surplus. Looking ahead for rest of FY20, the trade deficit while stable is at elevated levels, while service sector earnings improve. Netting of the two the FY20 current account deficit is likely to average -1.9% of GDP.