Singapore: A gentler SGD slope in a tougher environment

We expect the Monetary Authority of Singapore (MAS)to slightly flatten the slope of the Nominal Effective Exchange Rate (NEER) policy band, which, as per our model, would be to 0.5%/year from the present pace of 1%. No changes are expected to the width and mid-point of the band.

We do not expect the MAS to abandon the modest and gradual appreciation path for its policy band. According to our model, the SGD NEER is still fluctuating within the stronger half of its band. 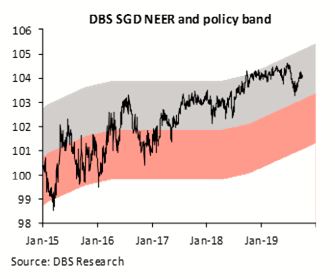 We do not see a case for the SGD policy to turn neutral at this meeting. After the 1997/98 Asian crisis, there were three periods when zero-appreciation paths were adopted for the policy band. The first two were triggered by US-led global recessions following the bursting of the tech bubble in 2001 and the outbreak of the global financial crisis in 2008.

The third episode started in 2016 after a prolonged period of deflation triggered by the global oil price crash in the latter half of 2014. The global economy was also weakened by currency wars especially after the one-off CNY devaluation in August 2015. 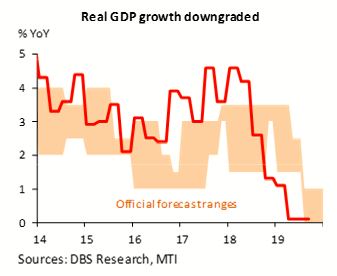 Singapore is likely to have averted a technical recession. After the weak -3.3% QoQ saar in 2Q19, our economist expects the advance real GDP growth estimate for 3Q19 to turn positive at +2.1%. For the whole of 2019, we expect growth of 0.7%, in the upper half of the official 0-1% forecast range. The Ministry of Trade and Industry has twice downgraded this year’s growth forecast, first to 1.5-2.5% from 1.5-3.5% in May, and subsequently to 0-1% in August.

The government, at this juncture, does not intend to respond with counter-cyclical fiscal measures such as an extraordinary budget. It will be monitoring to see if the weaknesses from the trade war have spread beyond the external and manufacturing sectors. Close attention will be paid to the labour market where the unemployment rate for residents has been at/above 3% since 4Q18.

Singapore is not headed for deflation. Despite earlier downgrades, the official inflation forecasts for 2019 are not negative. The forecast for CPI was first lowered in February to 0.5-1.5% from 1-2% earlier. This was followed in April by a downward revision in the core inflation to 1-2% from 1.5-2.5% previously. 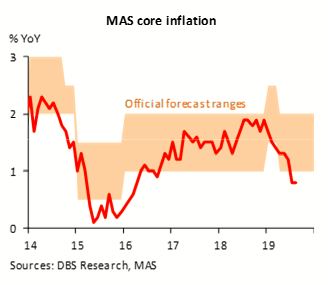 Stripping out private transportation and accommodation costs, core inflation has fallen steadily to 0.8% in August from 1.9% in December. The dampening effect on prices have been attributed to the lower cost of electricity from this years’ nationwide launch of the Open Electricity Market initiative. 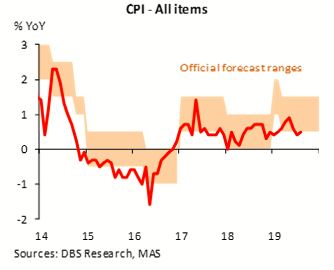 Overall, CPI and core inflation have averaged 0.6% YoY and 1.3% respectively in the first eight months of the year. They are likely to end the year close to the floor of their official forecast ranges. For example, our economist expects headline inflation to recover to 1.1% in 2020 from a projected 0.5% this year.

We remain cautious on the outlook for the SGD. The trade-reliant Singapore economy is vulnerable to heightened growth worries in the world’s largest economies. The trade war remains the top downside risk now seen pushing China’s growth below 6% in 2020 amidst negative spill-over effects into the US economy. Multiple factors – higher US tariffs on EU goods, a possible no-deal Brexit on October 31 and a weak German economy – could also tip the Eurozone economy into recession.

Unless the trade war tones down amidst more upside surprises in the rest of the world vs the US, our forecast for USDSGD to end 2019 above 1.40. This projection is consistent with our view for the CNY to weaken to 7.20 and the euro to stay weak in a 1.05-1.10 range. The CNY and the EUR are the dominant components in the USD indices for Developed Markets and Emerging Asian currencies respectively. The above table suggests that if China and the Eurozone worsen and drive the CNY and EUR weaker towards 7.25 and 1.00 respectively, USDSGD will be looking at a higher trading range of 1.41-1.44.