Glimmer of hope around trade war and Brexit has buoyed financial markets in recent days. But such developments may only offer ephemeral relief.
Taimur Baig , Masyita Crystallin11 Oct 2019

Photo credit: AFP Photo
Monetary easing has been on for a while; 2020 to see fiscal at play

Asset markets have gyrated the past couple of months around the backdrop of a global economic slowdown and a multitude of geopolitical risks, with the last few days reflecting a risk-on mood with some glimmer of hope over a China-US trade deal and an orderly Brexit. The DXY has weakened a tad, equity markets have rallied, and VIX has eased markedly through the course of this week.

But this is unlikely to mark the beginning of a major turnaround, in our view. A trade deal can only offer interim relief on China-US matters as the antagonism between the two superpowers is in fact widening. The decision by the US this week to blacklist some Chinese companies and restrict the visas of some Chinese diplomats on human rights grounds show clearly that many areas of confrontation have opened up beyond agriculture purchases and market access. China and the US will continue to find it difficult to reach common ground on Hong Kong, Taiwan, North Korea, Uighurs, Belt-and-Road, cyber security, and tech dominance, in our view, regardless of what happens on the trade front in the near term.

Similarly, on Brexit, a sharp rally of GBP underscores relief among market participants weighed down by chronic uncertainty. But there should be no illusion that the UK remains a divided nation, the Irish solution (with Northern Ireland becoming a special economic zone) may well turn out to be unimplementable, and the overall economic outlook remains bleak.

From the perspective of Asia’s policy makers and businesses, the euphoria of the market is by no means reason for complacency. We have pointed out through the course of this year that a large part of the global economic slowdown has little to do with trade wars. A secular decline in auto and electronics demand, crises in some emerging markets (Argentina and Turkey), and most critically, a structural slowdown in China, will continue to cast shadow on the outlook.

Playing defence at this juncture, therefore makes sense. Depressed agriculture commodity and energy prices have pushed down inflation in the region in recent years, allowing central banks to ease monetary policy. Indeed, our analysis of policy rate differential between Asian economies and the US shows clearly that monetary policy easing, on a relative basis, began way back in 2015. Only with the Fed’s recent rate cuts, signs of the cycle’s bottom have emerged. 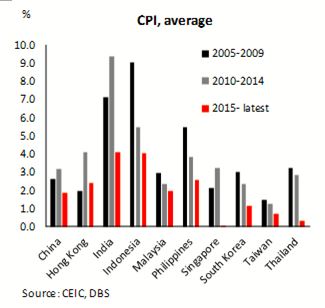 Fiscal worries are not paramount in Asia, especially with such low rates. Pro-growth budget initiatives are in the pipeline in India, Indonesia, South Korea, and Thailand. It’s the right time to play defence, in our view.