Chart of the Week: Asia’s policy rates versus the Fed

Asian central banks have been playing defence this year, but their policy stance has been steadily easing for years. Depressed agriculture commodity and energy prices have pushed down inflation in the region, allowing central banks to ease monetary policy. Indeed, our analysis of policy rate differential between Asian economies and the US shows clearly that monetary policy easing, on a relative basis, began way back in 2015. Only with the Fed’s recent rate cuts, signs of the cycle’s bottom have emerged. 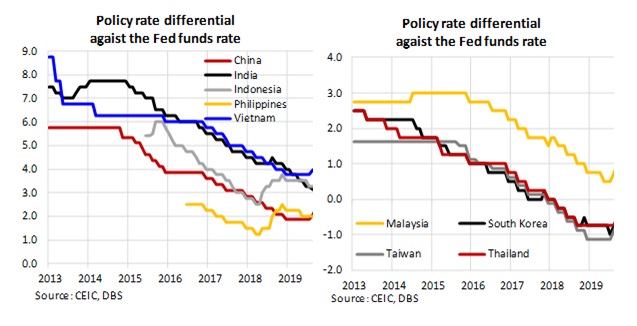 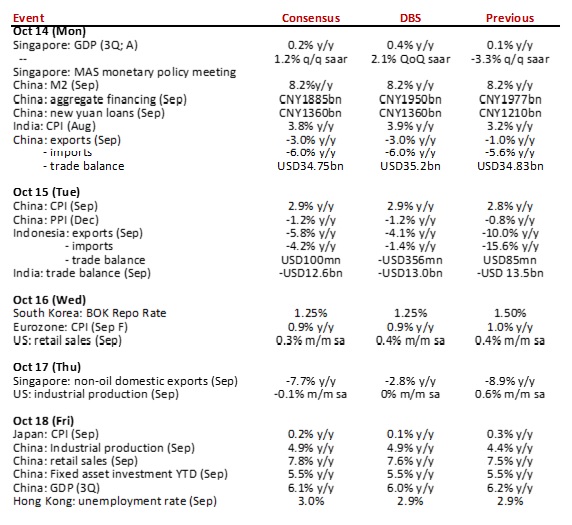 China: The economic activities are expected to show modest improvement in September. The NBS Manufacturing PMI, an early indicator, increased to 49.8 in September from 49.5 in August. Retail sales growth should have edged up mildly to 7.6% YoY from 7.5%. Industrial production, likewise, is expected to rebound to 4.9% from 4.4% amid increasing infrastructure investment. Yet, headline fixed asset investment growth is forecasted to remain stable at 5.5%, as it is partly offset by the weakness in private investment. On external front, exports and imports are expected to decrease by 3.0% YoY and 6.0% respectively, from -1.0% and 5.6% in August due to existing and potential tariffs. The GDP growth of 3Q is therefore forecasted to drop from 6.2% to 6.0%. Looking ahead, we expect that the authorities will adopt more pro-growth policies. In fact, the PBOC has already cut the reserve requirement ratio (RRR) by 50bps in September. Another two 100bps cuts for city commercial banks will be come into effect on 15 Oct and 15 November. New Yuan loans is forecasted to increase from CNY1210bn in August to CNY1360bn in September.

Hong Kong: The labor demand-supply balance should have remained largely tight due to the aging population. The seasonally-adjusted unemployment rate is forecasted to remain at a 2.9%. However, labour demand will continue to hinge on the playout of external uncertainties, including the Sino-US trade frictions, Brexit and a global economic slowdown. The demand for labour, of which over 10% comes from the import/export trade and wholesale sector, has increased visibly since Jan. That said, there will be upward pressure on the jobless rate for the retail, accommodation and food services sectors due to political instability, with visitor arrivals registering a YoY decline of 39.1% in August.

South Korea: We expect the Bank of Korea to cut the benchmark repo rate by 25bps to 1.25% this week, and meanwhile, downgrade its 2019 GDP growth and CPI inflation forecasts (current: 2.2%, 0.7%). The latest set of economic data remained weak, exerting pressure on the BOK to support growth and prevent deflation risks. Exports contracted for the tenth consecutive month by -11.7% YoY in September. CPI dropped to -0.4% in September, the first negative reading over more than half a century. Although retail sales and consumer confidence picked up, it could be attributed to the temporary rise in holiday demand ahead of the Chuseok Festival. Externally, monetary easing by global major central banks and stabilisation in the KRW also provide room for the BOK.

India: Inflation in August likely firmed up to 3.9% YoY vs 3.2% month before. This increase largely reflects higher food prices, driven up by seasonal trends and supply shortages in midst of heavy rains. High frequency data points to a sharp rise particularly in vegetables, as three staple variants rose 11% MoM on average vs 7% in August. Base effects likely added to the buoyancy, but higher food will be partly offset by lower fuel prices. Core inflation is expected to hover around 4.2-4.5%—firm but below 5.8% in FY19. We don’t expect the RBI to pull the brakes on its rate cutting cycle, with this spurt seen as supply-driven and temporary. Weak pricing power of manufacturers and a wide negative output gap is likely to keep the monetary policy stance accommodative.

Indonesia: We expect a slight deterioration in the trade balance to -USD356mn from USD85mn, on the back of deeper slowdown in exports (-4.1% YoY) than imports (-1.4% YoY). In general, export deceleration this year was driven by weaker global prices, whereas exports volume is still recording growth. On the other hand, import slowdown is driven by volume rather than price. Weaker capital and raw material goods imports tally with slower investment growth this year. Non-O&G trade balance has been continuously weakening from a recent peak, averaging USD0.32bn this year from USD0.46bn in 2018 and USD1.5bn in 2017. We see risks of the trade balance deteriorating further, as imports might starts to pick up alongside the start of Jokowi’s second term in end-Oct, while there are also no signs of exports picking up in the short run.

Eurozone: Price pressures are expected to have stayed benign in September, which together with base effects, are likely to result in inflation easing to 0.9% YoY from 1% month before. This is way below the 2% ECB target, with official annual projections pointing to below target inflation over the next two years, at the least. Tepid inflation, coupled with weakening growth, prodded the central bank to resume asset purchases and cut the deposit facility rate last month. More action is likely as the largest member country, Germany, looks set to slip into a technical recession this year and the Eurozone is on course to expand by a subdued 1% YoY in 2019.

Japan: September inflation data are due this week. Headline CPI is projected to slip to 0.1% YoY from 0.3% in the previous month, while core CPI is estimated to drop to 0.2% from 0.5%. Both figures would be the lowest seen since end-2016. The 2ppt consumption tax hike in October will likely boost CPI to 1-1.5% in the next 12 months. But underlying inflation is likely to remain weak, at 0-0.5%. The Bank of Japan would face pressure to revise down annual inflation forecasts and ease monetary policy at its 31st October meeting. During regular bond operations in October, the BOJ has reduced the purchases of all the JGBs with maturity above 3 years but increased purchases in the 1-3Y space, showing an intention of driving up long-term yields while tolerating greater decline for short-term yields. This paves the way for the BOJ to cut the short-term policy rate on 31 October, likely by 10bps to -0.2%.