The Singapore economy has averted a technical recession. While economic outlook remains challenging, some signs of stabilization are emerging.
Irvin Seah14 Oct 2019

Photo credit: AFP Photo
Advance GDP estimates for 3Q19 announced this morning reported a weaker than expected growth of 0.1% YoY, and unchanged from the previous quarter. However, the silver lining is that the economy has averted a technical recession, with a benign expansion of 0.6% QoQ saar in the quarter. This is in line with our long-held expectation and a rebound from a sharp decline of 2.7% previously.

The Monetary Authority of Singapore is expecting full year GDP growth to come in around the mid-point of the current official forecast range of 0-1.0%. In response to the latest set of figures, we are recalibrating our full year GDP growth forecast to 0.6%, down 0.1%-pt from the previous estimate, despite a likely marginal upward revision to the latest set of figures, as well as some improvement in growth performance in 4Q19.

Bottoming out in manufacturing

On the surface, the manufacturing sector appears to be in doldrums. Headline growth reported a contraction of 3.5% YoY. However, that is partly a result of the high base in the same period last year. Sequentially, the sector has recovered to register a marginal decline of 0.4% QoQ saar, a marked improvement from -4.2% previously. This is in line with our view that the manufacturing sector could be bottoming out. We reckon that the worst of the manufacturing growth cycle could be over, but caution that growth in this sector will remain lacklustre amid weak global demand and uncertainties around the ongoing trade talk between the US and China. 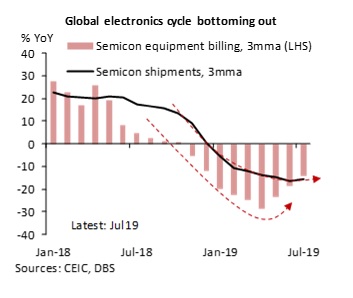 Electronics indicators such as the growth in semiconductor equipment billings and semiconductor shipments are suggesting a turnaround for the industry. Key market indicators i.e. China PMI has also started to improve. While the outlook for the manufacturing sector could continue to remain challenging, and the US-China trade talks could swing either way, at least some of the high frequency data is beginning to show some signs of stabilization.

Amid some improvement in construction data, the biggest focus is on the services sector (two-thirds of GDP and employment). The latest set of figures suggest that the sector is holding up despite the disappointment in the second quarter. The sector is now expected to post a benign expansion of 0.9% YoY. Growth on the margin has picked up to 0.7% QoQ saar, from -1.4% previously. 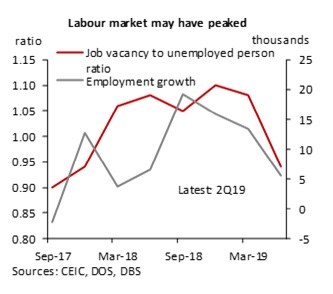 Indeed, there have been mixed signals on services growth. Business loan growth appears to have bottomed but consumer loan growth continues to slide. The main worry is the spill-over effects on the labour market. Job vacancy to unemployed person ratio has dipped below one while employment growth eased to a three-year low.

Policymakers are certainly keeping close watch on this. Beyond the present monetary easing by the MAS (see section below), expect a robust fiscal response in the upcoming budget early next year. An outsized accumulated surplus of about SGD 15.6bn implies ample room for aggressive fiscal support for the economy. We expect a highly expansionary fiscal policy early next year.

External headwinds will remain strong. A positive resolution in the trade talk is far from conclusive. Brexit and weakness in the fundamentals in Eurozone should be closely watched. Slowdown in China is real, and more policy support is certainly required. Across Asia, central banks have begun to ease monetary policies. What would be required to turn the receding global economic tide would be a robust and synchronized fiscal boost across the region. Policymakers are beginning to roll out expansionary fiscal policies. Indeed, we expect the Singapore authorities to do so likewise in the upcoming budget next year. Though the economy has averted the fate of a technical recession, a robust policy response would still be required to lift the boat amid the choppy outlook. Growth may have bottomed but the improvement ahead could be weak. Considering the above, we expect GDP growth in 2020 to improve to 1.4%, up from a revised 0.6% this year.

The decisions at the SGD policy review were broadly in line with expectations. As expected, the Monetary Authority of Singapore has slightly flattened the slope of the SGD nominal effective exchange rate (NEER) policy band and kept its width and centre unchanged. According to our model, the band should start appreciating at a pace of 0.5%/year vs 1% previously. The central bank has kept the door for another easing should the already weak growth and inflation outlook deteriorate significantly. 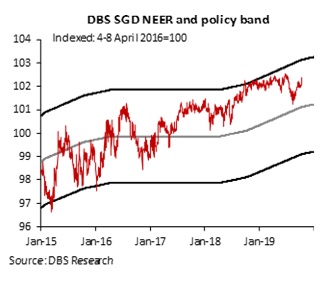 In our view, the SGD NEER is still considered strong in the upper half of its policy band. In USDSGD terms, the downside is constrained by the band’s limit at 1.36 and should be closer to the mid-point around 1.39. The recent fall in USDSGD to 1.37 from 1.3850 this month was attributed to the temporary rollback in trade war and Brexit fears. A reality check is likely to set in after the burst of excessive optimism last Thursday-Friday. Our forecast remains for USDSGD to rise above 1.40 by end-2019.