Indonesia: look beyond the deficit 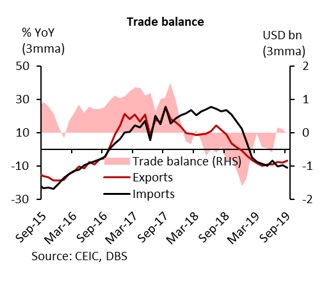 Notably, the cumulative trade deficit of USD1.9bn in the first 9 months was half the USD3.8bn shortfall the same period last year. This was easily attributed to the fact that imports (-9.1%) fell faster than exports (-8.0%) during the comparable period. The trade balance is likely to fluctuate between surpluses and deficits (in a ±USD500mn range) in the coming months. Both exports and imports are expected to remain weak. Exports will continue to be weighed down by the global slowdown. Imports will be kept relatively low towards 1Q20 as investors await the new government (to be inaugurated later this month) and its initiatives.

Stripping out the price effect of the global slowdown, exports have expanded in volume terms, by 7.5% YoY in January-September vs 13.4% the same period last year. In contrast, import volumes did contract albeit by a smaller 4.1% vs 8.1% for the comparable periods.

Led by an overall slowdown in investment activity, the contraction in imports is likely to persist. Investment growth has eased to 5.0% in 1H19 from 6.9% in 1H18 during this election year. Government investments have slowed from more projects being completed than new projects kicking off. Private investments have sat on the sidelines but should start to pick up after the President and his government are sworn in later this month. The slowdown in imports has been broad-based; all three categories – consumption goods, raw material and capital goods – contracted (chart below). 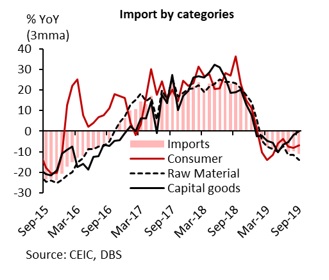 Consumer goods imports have weakened from the rupiah’s depreciation in 2017-18, the government 20% biodiesel requirement (B20) (effective September 1, 2018), and the additional tariff on more than 1000 consumption goods (effective September 12, 2018). The rupiah’s appreciation (in nominal and trade-weighted terms) (see chart below) in the past year has helped consumer goods imports to recover to 6.8% YoY in September from 2.0% in August. 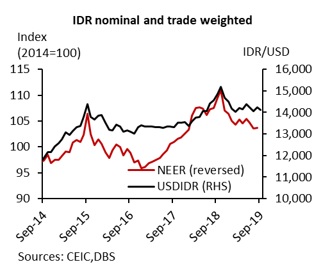 The overall weakness in capital and raw material imports imply more investment growth slowdown in the next 1-2 quarters. Lower imports will hurt exports because of the latter’s high import content. Hence, any imports restriction measures that involve raw materials and intermediary goods to narrow trade deficit would be counterproductive.

With Bank Indonesia’s focus balanced between supporting growth and maintaining rupiah stability, we have pencilled in another 25bps rate cut in 4Q19, coming possibly as soon as this month.