China’s holdings of US Treasury securities declined for the second consecutive month to USD1.1tn in August. Meanwhile, its official gold reserves rose to a record 1942 tons in October.
Ma Tieying21 Oct 2019

China’s holdings of US Treasury securities declined for the second consecutive month to USD1.1tn in August. Since hitting the peak in June 2018, China has reduced its holdings by a total of USD88bn over the past 14 months. Meanwhile, its official gold reserves rose to a record 1942 tons in October, 100 tons higher than in June 2018. China’s diversification of foreign reserves from dollar assets towards gold may have helped to support global gold prices. But the impact on US bond yields has been largely muted, because the reduction of US bond holdings was largely offset by increased purchases by Japanese and other foreign institutional investors. 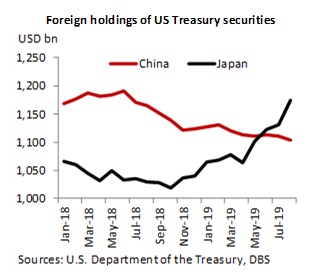 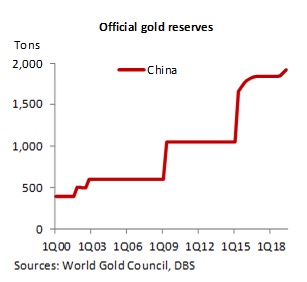 Hong Kong: Trade figures should have stayed weak in September. Outward and inward shipments, which contracted 6.3% YoY and 11.1% respectively in August, are forecasted to further weaken to -8.5% and -10.5% due to the intensified trade war. Imports are also expected to slump due to weakening domestic demand amid local instability – retail sales value recorded the 7th YoY decline of 23.0% in August. On inflation front, CPI should have accelerated to 3.7% YoY in September from 3.5% in August. Increased pork and fruit costs in China have added upward pressure on food prices. A weak HKD should also keep import costs elevated. Yet, headline local costs are largely contained due to slow economic growth and the latest one-off relief measures imposed by the government.

Indonesia: Bank Indonesia will hold its policy meeting this week. Given the continuously benign inflation and GDP growth (possibly easing below 5% YoY in 3Q19), we think another 25bps policy rate cut in 4Q19 is likely and could come as soon as this week. Overall, we remain positive on bonds and equities, given the prudent macroeconomic policies that deliver rate cuts without triggering significant Rupiah volatility. High frequency indicators for domestic demand and trade have all pointed to further growth deceleration (e.g., retail sales, automotive sales, consumer confidence). Investment growth is unlikely to pick up in 2H19 as more government infrastructure projects being completed than new projects kicking off. Private investment might pick up next year as uncertainties over the new cabinet fade. On the external side, both capital flows and trade deficit are relatively better than last year. The Sep19 trade deficit has improved, reaching only 1.9bn vs USD3.8bn last year. We expect trade balance to fluctuate between surpluses and deficits, within a ±USD500mn range, in the coming months as both imports and exports are likely to contract further.

Malaysia: Inflation for September will likely inch a tad lower. A forecast of 1.4% YoY has been penciled into our forecast, which is marginally lower than the 1.5% previously. Nonetheless, prices have remained fairly stable, and we continue to believe that inflation will remain range bound between 1.5-2.0% in the coming months. As effects from the post-election policy changes – including the zero rating of the GST, subsidies for petrol and removal of toll charges – fade from June onwards, inflation has reverted to a more normalised path. This would allow the central bank to shift its attention towards growth. Although GDP growth has accelerated in 2Q19 (+4.9% YoY), that came largely because of a one-off tax refund for consumers and low base in the same period last year. We expect growth momentum to ease in the coming months and this is where we think there is room for monetary policy to turn a bit more accommodative. We continue to expect Bank Negara to lower the Overnight Policy Rate by 25bps in the coming months.

Singapore: Inflation and industrial production index for September will be on tap this week. Headline CPI inflation will likely remain stable at 0.5% YoY, unchanged from the previous month. Beside a subdued external inflationary environment, domestic price pressure has been exceptionally weak amid slowdown in growth momentum. Output gap has turned negative, suggesting a lack of demand-pull price pressure. While the economy may have averted a technical recession, growth impetus will likely remain weak. Moreover, the Open Electricity Market reform has been successful in lowering electricity tariffs. This has prompted our view that inflation will remain benign and average just 0.5% this year, almost unchanged from 0.4% in the previous year.

Industrial output for September will likely remain in the negative territory at -1.8% YoY. While this is a marked improvement after the downside surprise of -8.0% in the previous month, there are risks to this forecast judging from the most recent export data. Non-oil domestic exports for the same month fell by 8.1% YoY. Though we can take comfort that the decline has moderated compared to the low of -16% in May, the economy is still not out of the woods. Key electronics exports shrank by 25% in the month despite the tentative signs of a potential turnaround in this cluster judging from the figures in global semiconductor equipment billings and semiconductor shipments. Indeed, global economic conditions have been exceptionally challenging, with trade war and electronics downcycle weighing on demand. Such uncertainties and risks will continue to weigh on the performance of the manufacturing sector in the coming months.

South Korea: GDP growth is expected to slow to 3.5% QoQ saar in 3Q, down from 4.2% in 2Q. This will take the average growth in the first three quarters to 2.1%, a subpar level compared to 2.7% in 2018 and the potential rate of 2.5-2.6%. Exports continued to contract sharply in 3Q, reflecting the fallout of global growth slowdown, Japan-South Korea trade tensions and US-China trade war. But domestic demand showed some signs of stabilisation, as evidenced by Aug/Sep retail sales, consumer confidence, housing prices, and unemployment rate. This was probably helped by the festive demand, increase in fiscal spending, and decline in interest rates. Admittedly, external environment remains challenging and its negative spillovers on the domestic economy could offset the policy stimulus effects in the coming quarters. We are maintaining our full-year GDP growth forecast at 2.1% for 2019 and 2.4% for 2020 at present, but seeing risks tilted towards the downside.

Taiwan: September export orders and industrial production are due this week. Export orders are expected to contract for the 11th consecutive month, by -5.2% YoY. Overseas demand conditions remained sluggish, in the context of global growth slowdown and the new round of US tariff hikes on Chinese products that took effect in September. It remains to be seen whether Taiwan’s exports and industrial production can continue to hold up, underpinned by the effects of investment repatriation and trade diversion. Earlier data showed that exports dropped to -4.6% YoY in September from 2.8% in August, but the sequential growth remained solid at 0.8% MoM (sa). We expect industrial production to post 0.7% in September, slower than 2.3% in August but still in the positive territory.