Notes from IMF Meetings: Settling for a low normal

Concerns about slowing world economy and geopolitical risks notwithstanding, the corridors of IMF were alarm-free.
Taimur Baig21 Oct 2019

Photo credit: AFP Photo
What we picked up in Washington

The vibe in Washington DC, venue of the annual meetings of the International Monetary Fund and the World Bank Group, this past weekend was subdued and yet unalarmed. Having experienced an extended period of downshift in inflation, interest rates, trade, and growth this year, markets and economies are resigned to a low normal, with noise from trade war, Brexit, and stress in emerging markets adding noise time to time. Asset markets were not seen as frothy, although corporate debt levels were deemed too high. There was low expectation of vigorous monetary or fiscal action from major economies next year, and much of the ongoing slowdown was seen as the result of a combination of unavoidable late cycle dynamics and various structural factors.

Few saw pockets of sizeable upside, but very few, if any, were looking at currency crises, banking system stress, outright recessions, or a sharp worsening of geopolitical tensions in the coming year. Fatigued from trade war and a looming election calendar in the US were expected to act as agents of moderation. Balance of risks may be tilted to the downside, but the feeling of dread so prevalent earlier this year seemed to have been absent from the corridors of the IMF this past weekend.

A gradual slowdown is expected next year, as support from fiscal stimulus fades and investment uncertainties loom. But growth is expected to remain above 2% thanks to easier monetary policy, reduced fiscal uncertainty (due to the recent debt ceiling deal), and a strong labour market. (DBS forecast is more downbeat, at 1.5%). 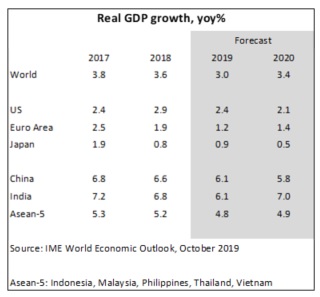 China is seen largely from a structural lens. Regulatory efforts needed to rein in debt and the macroeconomic consequences of increased trade tensions have taken their toll on demand this year. Growth is projected to continue to slow gradually in the coming years, reflecting a decline in the growth of the working-age population and gradual convergence in per capita incomes.

Issuances have risen, asset managers have moved up the credit risk curve (i.e. added more risk to their portfolio), and liquidity has declined. To illustrate the build-up in risks, the IMF’s Monetary and Capital Markets department reckons that a substantial growth slowdown episode (measured as half as severe as the GFC) would put USD19tn of corporate debt at risk. But at the same time, thanks to steps taken by G3 central banks this year, financial conditions have eased as asset markets have rallied and long-term interest rates have declined.

Another risk stemming from the lower-than-longer interest rate is that the portfolios of large institutional investors have become more similar and less liquid. The traditional stabilising role played by such investors (they buy assets during selloffs) is likely to diminish as a result of such correlated and illiquid positioning.

There is growing demand for sustainable practices and investment, but the industry is still handicapped by lack of standardisation, as well as fragmented and inadequate disclosure. There is also considerable worry that the expected performance of a wide range of firms and economies is not factoring in the serious downside to earnings and profits owing to climate change.