Chart of the Week: China and India’s rise in “Doing Business” survey

Rankings of China (from 46 to 31) and India (from 77 to 63) improved markedly in the World Bank Group's Doing Business 2020 report. The report credited China with improving protections for investors, strengthening procedures for enforcing contracts, and making trade easier with changes to customs administration. Other reforms included implementing a preferential corporate income tax rate for small enterprises, enhancing the electronic filing and payment system as well as reducing the value-added tax rate for certain industries. Meanwhile, India improved its business conditions by improving the bankruptcy mechanism, reducing business registration fees, and enhancing electronic submission of documents, amongst others. 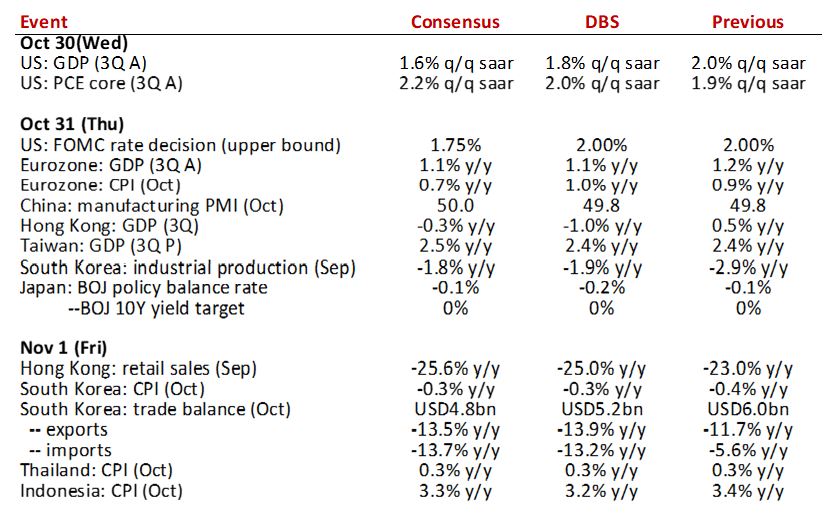 Eurozone: The common currency bloc likely grew by a slower 1.1%YoY in 3Q, with downside risks stemming from weaker exports, which impinged on the domestic manufacturing sector. The Bundesbank expressed concerns over Germany likely slipping into a technical recession last quarter. Some offset will be nonetheless provided by a still firm household demand and non-manufacturing private sector activity. Inflation was likely little changed at 1% YoY in October, remaining way below the target. New ECB Chief Christine Lagarde will assume office this week after outgoing head Mario Draghi ended his tenure with a downbeat assessment on economic conditions at last week’s review. Asset purchases are set to resume in November, and we expect the new chief to stay dovish but push national governments to step on the fiscal pedal to boost growth.

China: The manufacturing PMI is projected to bounce back to 50.0 in October from 49.8 in September. Domestically, the were signs of recovery. Retail sales and industrial production improved to 7.8% YoY and 5.8% in September from 7.5% and 4.4% in August respectively. Stimulus measures should continue to boost the economy. In fact, new mid-long term corporate loans continued to leapfrog by 48.3% in September. This will translate into further investment growth in the months ahead. Yet, the new export order component should have stayed in contraction territory for the 16th consecutive month due to weakening global demand as well as the escalated trade tension. Potential higher tariff to be effective in December is also on the plan.

Hong Kong: We expect Hong Kong economy to enter a technical recession in 3Q19. The real GDP is forecasted to contract by 1% YoY in 3Q19. On external front, exports growth stayed negative for 11 consecutive months amid various external headwinds. The US-China trade tensions, global economic slowdown, as well as Brexit will continue to restrain the re-export performance. Exports of professional and financial services would have taken hard hits as well. Meanwhile, domestic sector was weakened further. Retail sales is projected to fall by 25% in September from -23% in August. Amid social unrest and a depreciating CNY currency, visitor arrivals dropped by 39.1% in August. Local consumption sentiment was also subdued due to a volatile equity market. With the rising food price due to the widespread swine fever in Mainland China, the risk of stagflation is rising.

Japan: The Bank of Japan is expected to downgrade growth and inflation forecasts at this week’s meeting, and intensely debate whether to further ease monetary policy. We have penciled in a 10bps cut in the short-term policy rate into our forecast, but agree that it will be a close call.

Core CPI inflation has fallen to 0.3% YoY in September, notably down from the peak of 0.9% in April, and lower than the BOJ’s FY19 forecast of 0.8%. Growth outlook is also deteriorating, with domestic demand disrupted by the October consumption tax hike and the typhoon disaster, and exports weighed down by global growth slowdown, China-US trade war and Japan-South Korea trade tensions. But market sentiment appears to be sanguine, on expectations of a China-US trade truce and a Brexit extension. The USD/JPY was traded in the upper half of the 105-110 range, while the Nikkei climbed higher in the last couple of weeks.

Should the BOJ refrain from taking actions this week, we think it would keep the door open for policy easing at the next meeting in December. The impact of consumption tax hike will be clearer by then. The call for monetary and fiscal policy coordination may increase towards the year end, when the government compiles an extra budget for disaster relief and proposes the FY20 general budget.

Taiwan: GDP growth is expected to have stayed stable at 2.4% YoY in 3Q. Export growth (in real terms) turned positive during the Jul-Sep period. Domestic demand also remained solid, as evidenced by the high-frequency indicators including capital goods imports, building permits for construction and retail sales. It appears that the Taiwanese economy has started to benefit from the trade diversion and investment repatriation effects of the China-US trade war. Meanwhile, exports and investment growth have also received support from the cyclical factors – the electronics sector is bottoming out thanks to Apple’s release of new iPhones in September and the rising expectations for global 5G smartphone market to gain momentum next year. We now see some upside risks to our annual GDP growth forecasts, which stand at 1.9% for 2019 and 1.8% for 2020.

Indonesia: We expect October inflation readings to soften to 3.2% from 3.4% YoY on the back of moderating rice price and slower economic activity. Monetary aggregate has accelerated as Bank Indonesia embarked on a more accommodative monetary policy this year. BI has cut policy rate by 100bps to 5% so far, relaxed several macroprudential policy tools including easing the Loan-to-deposit ratio (LDR) for house mortgage and loan-to-finance ratio (LFR) for automotive financing. Despite recent policy rate cuts, lending growth has not picked up significantly as investment activity weakened in line with slower government projects activities. Investment indicators shows signs of further weakening this year: PMI has stayed below 50 for 3 consecutive months, cement sales contracted until 3Q19, auto sales recorded negative growth. Consumer gauge was weak as well, consumer confidence index has eased, and overall retail sales has decelerated. We think, weaker domestic demand until the end of this year will keep inflation at bay. Higher rice price due to drought season, might not lift inflation above 3.5% until EY19.

South Korea: October trade and inflation numbers are due this week. Preliminary data showed that exports continued to contract sharply during the first 20 days of October, by -19.6% YoY (vs -21.8% in the same period of Sep19). We look for a -13.9% decline in the full month of October, a similar extent compared to -11.7% in Sep19. CPI inflation, on the other hand, is expected to stay in the negative territory for the second straight month, at -0.3% YoY. Despite some positive news from the Apple supply chain, there is no clear sign of recovery in South Korea’s electronics sector yet. Export performance has continued to be weighed down by global growth slowdown, Japan-South Korea trade tensions and US-China trade war. Chances are high that exports will contract through the whole year of 2019, dragging down GDP growth to a 10-year low of about 2%.

Thailand: After another downside surprise in the September inflation, we expect October’s to stay stable at 0.3% YoY. Recent concerns over temporary food supply shocks have not manifested into meaningful price pressures, keeping the year-to-date run rate at 0.8% below our annual forecast of 1.0%. This is also below the BOT’s target, which provides the policymakers with enough room to lower benchmark rates by 25bps before year-end.