Following the surprise move to cut corporate taxes last month, speculation is high that a reduction in personal income taxes is on the cards next.
Radhika Rao29 Oct 2019 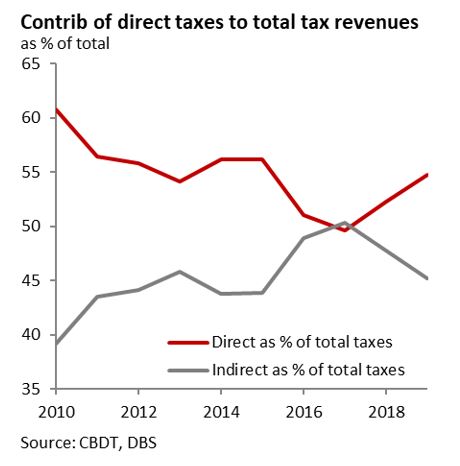 Income tax collections amounted to INR4.7trn last year i.e. 2.5% of GDP. This year’s target for personal income tax is budgeted to rise by an ambitious 23% YoY compared to a subdued 10% growth in FY19. 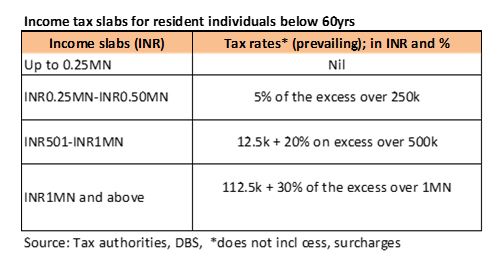 The table above captures the income tax slabs for resident individuals below 60Y, with rates differing for senior citizens depending on their age. The top marginal tax rate is 42.7% imposed on incomes above INR5MN, which is higher than the average in the region at 30%. There is also an additional cess of @4% imposed on the taxpayers. Returns are filed by about 55MN individuals, which make up a fifth of total households and about 5% of the economy’s estimated working age population.

What changes are likely

A combination of an increase in the basic exemption limit and introduction of a differentiated tax rate structure for higher incomes might be on the cards – for instance, the minimum tax slab could be raised to INR0.50MN vs INR0.25MN presently. Tax rate on incomes over INR0.5MN might be lowered and subjected to differentiating rates (10%, 20%, 30% etc.). Such an arrangement will lower the burden on smaller taxpayers, modestly better for mid-tier but raise tax incidence on higher tiers. We note the imposition of additional surcharges on the high net worth individuals in the FY20 Budget in July (INR5MN onwards), which has already raised the net burden on the high-income brackets.

Any increase in the basic exemption limit will be beneficial for the small taxpayers whose total income is below INR0.5MN (note that the Feb19 Budget had already provided rebate relief for INR0.5MN and below). Short-term fillip to consumption spending is likely, while a sustained improvement will require confidence in employment prospects and a sustained push towards raising job creation. Lower tax outgo leaves room for higher discretionary spending, which will boost demand for white goods, travel etc., but unlikely to evidently improve for large ticket spending (e.g. real estate). The latest RBI consumer confidence made for sombre reading as the current and future expectations index extended the decline in September, along with weaker readings for perception and expectation of employment conditions.

Estimates of the likely cost of a review of the existing income tax slabs range from INR1trn-INR1.5trn. Considering the revenue arrangements with the states, the impact on the centre’s finances could be to the tune of 0.3-0.5% of GDP.

As it stands, fiscal costs of the corporate tax reduction (likely to be smaller than earlier anticipated as not all firms are willing to forego exemptions to avail the new corp tax rate) coupled with below budgeted run-rate of direct and indirect taxes point to an at least 0.2-0.3% of GDP miss in the FY20 deficit target. Encouragingly, efforts to expedite receipts from divestment efforts is underway. Apart from ETFs and IPOs to raise funds, the stake sale pipeline consists of two oil majors, an electricals firm, national air carrier, corporatizing the national airports carrier, minority stakes in commodity names, amongst others. Hopes are high that total sales could outdo the budgeted target of INR1.05trn, a rerun of FY18, and help to narrow the anticipated tax shortfall.

Assurances that tax departments will be more taxpayer friendly, and almost all verification and audit of returns will be done electronically etc. are encouraging moves. Improving tax compliance is a necessary long-term change, to structurally improve collections and boost the headroom to increase productive spending. 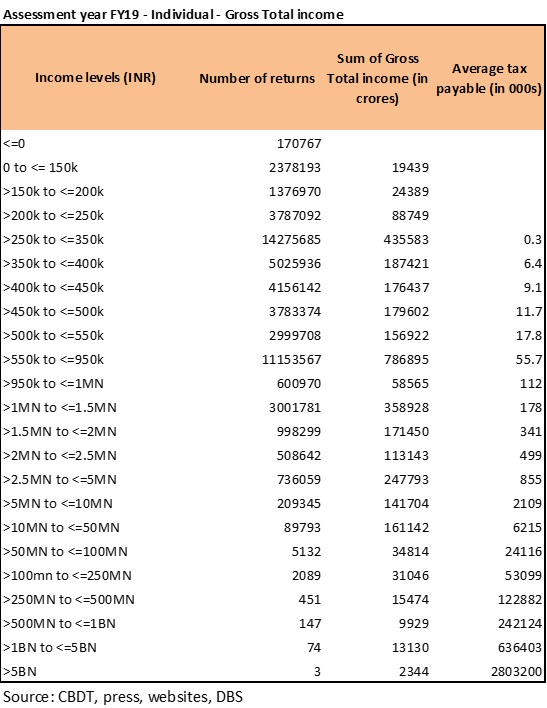