While Vietnam’s exports capabilities are on the rise, we think that at least a part of this dynamic also reflects trade diversion from China.
Samuel Tse04 Nov 2019

Photo credit: AFP Photo
Chart of the Week: Surge in US import from Vietnam

Through Jan-Aug 2019, US imports from China were down 12.6%yoy, while up 34.3%yoy from Vietnam. This divergence of outturn looks even more stark when it is underscored that just two years ago, China’s exports to the US, on a monthly basis, were 12 times more than Vietnam’s exports to the US; today, that ratio is down to 6. While Vietnam’s exports capabilities are on the rise, we think that at least a part of this dynamic also reflects trade diversion from China. 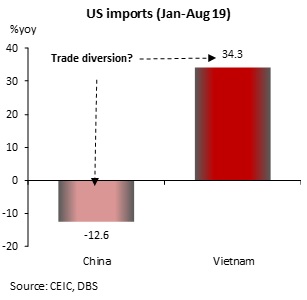 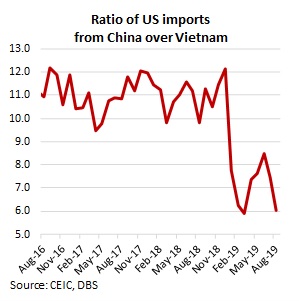 China: Exports are expected to drop further to -4.0% YoY in October from -3.2% in September amid lingering trade tension with the US. In fact, China’s new export order PMI eased to 47.0 from 48.2 and stayed in contraction zone for 17 months in a road. Also, the outward shipment performance will continue be clouded by moderating global demand, with both Manufacturing PMIs of Eurozone and Japan fell stayed in contraction zone for 9 straight months. Meanwhile, imports are expected to show mild improvement from -8.5% to -7.8% in anticipation of the increasing infrastructure investment. In fact, the local government bond (major financing source of infrastructure investment) jumped 10.1% YoY in September. Imports should improve alongside stimulus in the months ahead.

Taiwan: October trade and inflation figures are due this week. Exports are expected to grow 2.3% YoY, a modest rebound from -4.6% in September. The overall global demand conditions remain weak, due to the slowdown in major economies and the unresolved trade tensions between China and the US. But the electronics sector is showing nascent signs of bottoming out, thanks to rising orders from the Apple supply chains and emerging demand from the 5G smartphone market. Meanwhile, the trade diversion effects, as a result of the China-US trade war and Japan-South Korea disputes, should also help to bolster Taiwan’s exports performance. On the prices front, CPI inflation is expected to stay stable at 0.4% YoY in October, as the demand and supply side price pressures both remain tame.

Malaysia: Trade figures for October is on tap while Bank Negara will also convene its last policy meeting of the year this week. Headline export growth will likely register a better showing of +1.5% YoY, up from a decline of 0.8% previously. While this is an improvement, the export sector is not entirely out of the woods. Though respite is emerging from the US-China trade talk, the negotiation could still go either way. Trade war remains the primary factor weighing on export performance. Expect export growth to remain subdued in the coming months. Separately, import growth is projected to register a pick-up of 6.8% YoY, partly due to the low base in the same period last year. These would thus deliver an overall trade surplus of MYR12.2 bn, up from MYR10.9bn previously.

With the US Fed cutting interest rates for the third time this year, and growth outlook to remain challenging in the coming quarters, there is impetus for further monetary easing. This could possibly be the second rate cut by Bank Negara after its earlier May policy action. Moreover, the government has recently announced a smaller fiscal budget. With limited fiscal impetus, monetary policy will have to turn more accommodative in order to support growth. We expect the authority to lower the Overnight Policy Rate (OPR) by another 25bps to 2.75% in the upcoming meeting.

Philippines: Philippines GDP and trade data are on tap this week. We think 3Q19 GDP will pick up to 5.9% YoY from 5.5% last quarter mainly on the back of acceleration of government investment activities. Growth was weaker in 1H19 due to delay in budget approval which has been signed on April 15th, acceleration of government spending starting in May19 provided a boost to 3Q19 growth. In addition to pick up in government investment activities, consumption has been supported by low inflation environment, consumer confidence index has somewhat improved lately. Monetary policy has been supportive as well, BSP has cut policy rate by 75bps this year and adjusted the reserve requirement ratio (RRR) as well to support growth. This monetary easing has transmitted into lower lending rates and money supply and credit growth. We think credit growth will expand further as general economic activity improves and rates are generally lower.

Trade balance might remain stable at -USD2.9bn from -USD2.7bn in the previous month, both due to lower imports and higher exports. We expect exports to grow at 1.2% YoY from 0.6% while imports to -10.1% YoY from -11.8% partly due to high base effect last year. Imports might accelerate further as investment growth is expected to pick up in line with government projects disbursement acceleration after budget has been signed. Exports might pick up slightly but very dependent on how global condition especially on whether US-China trade war could escalate again.

Thailand: Policymakers are in a bind as they seek to balance between - addressing slowing growth, ensure financial stability and rein in the currency at the same time. Immediate priority will be accorded to preserving growth and containing the currency’s strength. This is likely to see the BOT ease policy rates by 25bps before year-end, taking the policy rate to 1.25% i. e. back to GFC-low, with a cut likely this week. For the THB, a rate cut will be tantamount to the central bank’s signaling its discomfort with a strong baht. Hence, non-rate measures might also be required to make a material difference to the currency.