Just as the currency is at a multi-year high, economic momentum is subdued, with a soft 1H spilling over to 2H.
Radhika Rao04 Nov 2019

Photo credit: AFP Photo
Much to the discomfort of Thai policymakers, the Baht has extended its gains to over 8% against the USD on year-to-date basis; on total returns basis (FX and interest rate) it’s up 9%, The currency is hovering at May 2013 highs and within a touching distance of the psychologically key 30/USD. Recent correction in the US dollar has also propped the unit. 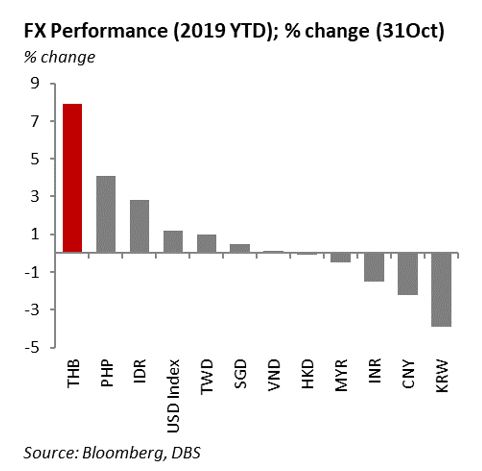 Key reasons behind the currency’s outperformance persist, a) narrower but still healthy current account surplus of ~6% of GDP in 2019; b) ample foreign reserves stock, with imports coverage of over an year; c) strong portfolio flow interests; d) outlook upgrades by rating agencies earlier in the year; e) low and stable inflation.

Just as the currency is at a multi-year high, economic momentum is subdued, with a soft 1H spilling over to 2H. Contraction in the manufacturing sector deepened in 3Q to -4.3% YoY vs 2Q’s -2.4%. Weak exports explain part of this sluggishness, with domestic demand also coming under strain as evidenced by falling car sales and downbeat consumer confidence indices. Amongst the non-farm sectors, service sector output has been easing, particularly in public spending related segments, real estate activities, financial services amongst others. The seasonally strong period for tourism receipts might offset part of the pressure on growth and balance of payments, but a strong currency deters a stronger pickup. 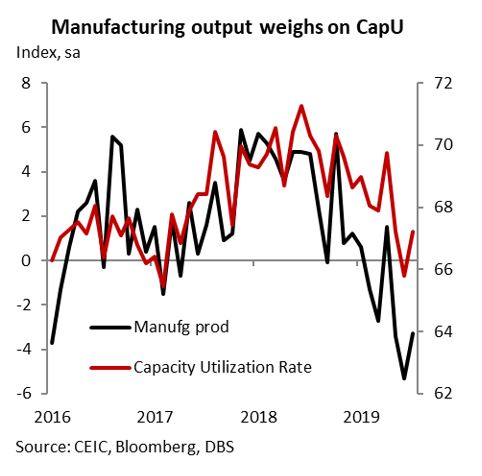 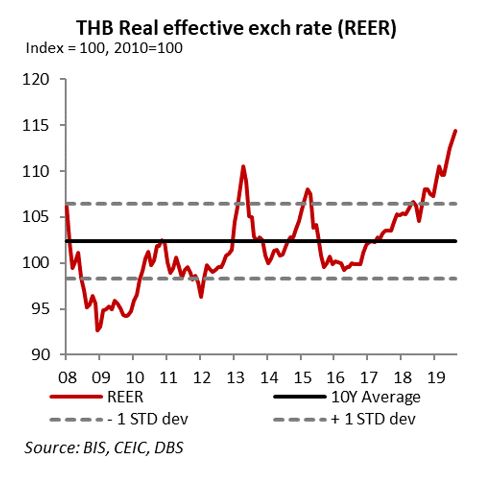 Exports slipped in 3Q (-0.4%) but the sharper decline in imports (-5.7%) left the trade balance with a net surplus, underpinning the current account. THB outperformance, however, bodes unfavourably for exporters’ revenues and trade competitiveness (see note). It didn’t help that the THB real effective exchange rate (REER), which measures THB’s movements vs its trading partners, has appreciated a strong 6.6% on year-to-date (see chart above).

On a related note, US suspended benefits for Thailand under the GSP preferential mechanism in October, on items worth USD1.3bn of the total USD4.4bn in 2018 affected. Thailand is the second biggest beneficiary of the GSP benefits, after India and followed by Brazil, Indonesia and Turkey. Set to take effect in April 2020, this withdrawal will affect over 500 items which will face a higher import tariff of 4.5%. If one assumes that all GSP-goods from Thailand will no longer enjoy preferential tariffs, the impact will be manageable as it makes a modest ~1.8% of overall Thai exports. Even as direct impact is limited, authorities are rightfully concerned of follow-up action.

At the margin, there is also a concern that Thailand might be included in the US Treasury’s currency monitoring list. The economy was neither mentioned as a manipulator nor is on the watch list at the last mid-year review. Even as the US has tightened the criteria, Thailand doesn’t meet the three conditions - particularly on the trade surplus with the US and FX intervention to gain a competitive edge – on the latter in fact, THB has appreciated strongly this year, which has weighed on trade performance and weakened its price competitiveness. Sharp increase in foreign reserves – highest since early 90s and a sizeable current account surplus are being viewed as concerns. Notwithstanding these, the risk of being viewed or named as a manipulator in the next assessment is modest, in our view.

For rest of the year, growth is likely to feel the drag from a tougher global trade outlook and weaker capex/manufacturing cycle. This tough trade backdrop is also accompanied by a delayed approval of the FY2020 Budget, which in turn defers support from capex spending stands by a quarter, to 4Q19 or early 2020. Fiscal stimulus rolled out in recent months have been timely to ease the extent of slowdown but will be insufficient to reverse the tide.

Spill-over of weak trade activities onto domestic demand will be under watch, which in turn could impact consumption and employment conditions. Uncertainty over trade war developments (decision on auto tariffs etc.) remain. With our 3Q GDP assumption likely to be missed by as much as 30-40bp, we revise our 2019 GDP forecast to 2.5% YoY, from 3% presently. This also moderates next year’s growth to 3% vs the previous 3.2% prior.

A positive development and presumably benefit from trade diversion, value of FDI applications into Thailand are up 69% in Jan-Sep19. Japan, China and Switzerland are the largest three investors. Two-thirds of the interests are in electronics, digital and automotive sectors.

BOT to ease before year-end

Policymakers are in a bind as they seek to balance between - addressing slowing growth, ensure financial stability and rein in the currency at the same time. Immediate priority will be accorded to preserving growth and containing the currency’s strength. This is likely to see the BOT ease policy rates by 25bps before year-end, taking the policy rate to 1.25% i.e. back to GFC-low. We move up the rate cut call to November from December previously.

For the THB, a rate cut will be tantamount to the central bank’s signalling its discomfort with a strong baht. Hence, non-rate measures might also be required to make a material difference to the currency, including measures to encourage outbound portfolio investments, allowing exporters to keep part of the earnings offshore, managing gold trading flows (a fifth of the current account surplus was gold). 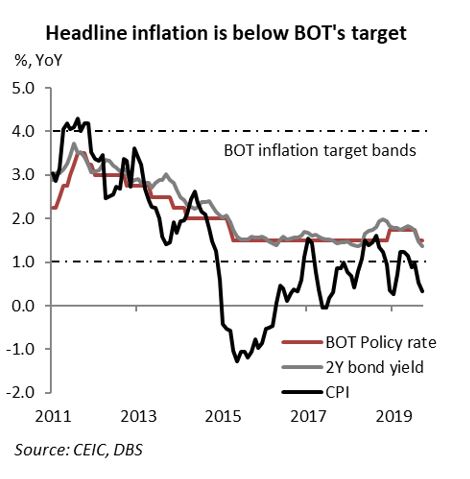 Concurrently global conditions also warrant attention. As risk-off sentiments catch a breath and US dollar is off highs, other Asian currencies are catching up with the THB. On total returns basis, the Indonesian rupiah and Philippine peso are up ~8% year-to-date (on FX basis alone, IDR is up 2.8% and PHP up 4%), closing in on the THB. If risk-appetite improves further and safe-haven flows subside, the extent and scale of further appreciation in the THB could ease.