India: Growth to slow before turning the corner

India is in midst of a growth slowdown, with recovery likely to set in the coming quarters.
Radhika Rao06 Nov 2019

Photo credit: AFP Photo
This is an abridged version of our Thematic Report “India: Growth to slow before turning the corner” (please download the pdf for the full report)

India is in midst of a growth slowdown, with recovery likely to set in the coming quarters. Even as global growth has lost momentum, idiosyncratic domestic factors have contributed to a sharper deceleration in India. Lead growth indicators for 3Q19 remain soft, with the DBS GDP Nowcast model pointing to further slowdown vs April-June 2019 quarter’s 5% YoY.

In our recent conversations with corporates and business practitioners, the question over the nature of slowdown - structural or cyclical, supply or demand driven - rose multiple times.We outline the likely causes behind the deceleration in activity, followed by counter measures to support growth. 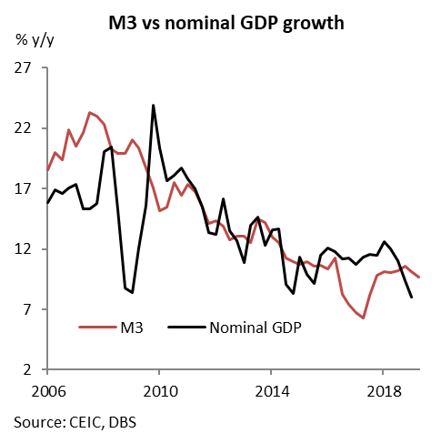 Balance sheet worries facing the four key four pillars of growth, is a structural drag. The extent of pressure varies, while efforts to deleverage is underway on most fronts. An industry wide asset quality review is not on the cards for NBFCs, but efforts are underway to ring fence the weaker names,to ensure any liquidity crisis does not turn into an insolvency issue or pose systemic risks.

Corporates: At an aggregate level, debt levels of non-financial corporations’ debt as a % of GDP has moderated in the past two years. Granular data suggests firms are not completely out of the woods. Disconnect between the benchmark equity index and corporate sales performance has continued. Interest coverage ratio is off lows as borrowing costs have begun to recede but is still below pre 2010 levels.

Government: The fiscal math is under scrutiny, particularly as the revenue slowdown poses a risk not only the centre’s coffers but also its contribution to the states’ receipts. Gross tax revenues have risen by 1.5% YoY in first six months of FY20 i.e. April to September, way below target, while expenditure remains on course. This will further increase the reliance on borrowings, which already runs at a high of ~8% of GDP, comprising of centre, state and public sector borrowings. This equals households’ net financial savings, in effect reigniting the ‘crowding out’ for the private sector.

Households: While corporate and bank balance sheets were under stress since 2013-2014, consumption spending emerged as a key support for growth. Consumption held up despite weak income growth, suggesting two likely support factors. Household debt as a % of GDP has been gradually rising. Levels are clearly amongst the lowest compared to the advanced countries and many Asian counterparts.

Support measures are underway, and more is likely

As a reflection that reforms are headed in the right direction, India was amongst the top ten countries which have improved the most in the World Bank’s Ease of Doing Business ranking, for three consecutive years. India climbed from 77 last year to 63 amongst 190 countries considered in the 2020 edition of the report. Initial support through demand channels will provide short-term boost, which when followed by long-term focused reforms will help return growth to potential. The following near-term and medium-term measures will help to lift growth from the soft patch this year.

Real GDP decelerated from 8% in 1Q18 to 5% in 2Q19 (first quarter FY20). Our proprietary DBS Nowcast model and momentum indicators point to further slowdown in 3Q19 (i.e. 2QFY20) vs 2Q’s 5% led by lower consumption demand and investments, even as government spending resumes after elections.
After the mid fiscal year slump, we expect a gradual improvement in the momentum towards late in the fiscal year and into 2021, helped also by base effects and lagged impact of measures undertaken. A broad pullback in near-term growth trend, however, prods us to revise down our GDP forecasts for this year and next. We expect the output gap to stay negative, with GDP growth below 6% this year and closer to 6% in FY21.