2020 financing obligations of some Asian economies are very large relative to their reserves.
Duncan Tan11 Nov 2019

The markets are stepping into 2020 with little concern about debt sustainability in the sovereign or corporate space. Armed with USD5.5trln in FX reserves, Asian emerging market economies may appear in good shape to deal with external finances. But the financing obligations of some Asian economies are very large relative to their reserves. India, Indonesia, and Malaysia top the list of funding vulnerability. The reserves cushion of China and the Philippines have diminished as well. 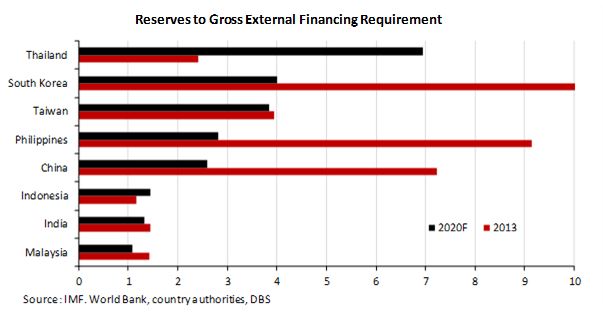 Note: The denominator of the ratio plotted in the chart is the gross external requirement (short term obligations plus the current account), while the numerator is international reserve held at the central bank. 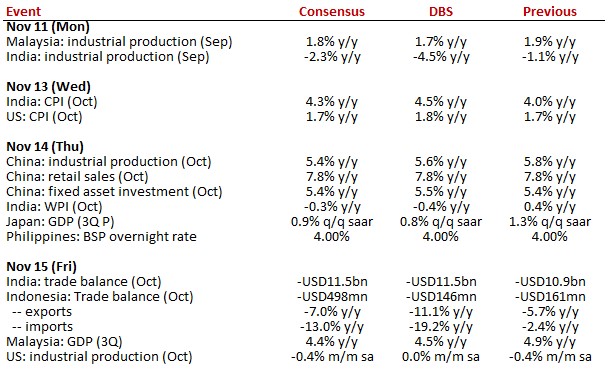 China: Headline fixed asset investment is forecasted to grow at 5.6% in October, compared to 5.5% previous month. The uptick was in line with signs of increased credit demand. Mid- and long-term corporate loans surged by 48% YoY in September. But growth of industrial production is expected to edge down slightly to 5.6%. Early indicators were mixed. Caixin manufacturing PMI improved to 51.7 in October whereas the official PMI shrank for the sixth straight month. Growth of retail sales is projected to remain flat at 7.8% as economic slowdown continued to weigh on consumer sentiment.

India: Data releases this week are likely to reinforce the unfavorable mix in data – slowing growth just as transient supply factors drive inflation past target. September industrial production due at the start of the week is expected to decline -4.5% YoY, deeper than the -1.1% contraction month before. This follows a sharp deceleration in core industries index and weak lead indicators e.g. auto sales and PMI numbers. Wednesday’s inflation numbers, on the other hand, will point to October inflation up 4.5% YoY – past 4% i.e. mid-point of the target range - vs 3.99% month before. A surge in food costs i.e. vegetables, cereals and perishables are expected to lift food (and bevs) inflation up 6.5% vs 4.7% month before, while other components hold steady. Core inflation is likely to stay subdued around 4% or shade lower in the month. Even as inflation runs above RBI’s forecasts, the weaker run-rate for growth will deter the MPC from pulling the brakes on its rate cutting cycle. We expect the 2QFY20 GDP, which will be released before the early-December rate review, to show that the economy slowed further vs 5% in 1Q, prodding the MPC to ease rates next month.

Indonesia: Indonesia trade balance is on tap this week, we expect stable trade deficit at -USD146mn from -USD161mn in September. We still expect contraction in both exports and imports. We expect imports to contract by 19.2% YoY and exports by 11.1%, partly due to high base effects. As exports deterioration was mostly driven by lower terms of trade rather than contraction in exports volume, we see smaller probability of exports picking up steam as long as global trade demand remains soft. Imports, on the other hand, could start to accelerate in 2H20 as the new government starts new projects and private investment starts to crowd in.

Japan: This week’s GDP report is expected to show a moderate growth of 0.8% QoQ saar in 3Q, slower than the 1.3% in 2Q and 2.2% in 1Q. Private consumption should have risen strongly, driven by the rush demand ahead of the October sales tax hike. Retail sales and department store sales surged 9.0% and 22.8% YoY respectively in September, a similar pace as in March 2014 (before the first phase of the sales tax hike took effect). On the other hand, however, exports and investment may have weakened in 3Q, in the context of global growth slowdown, China-US trade war and Japan-South Korea trade tensions. Considering a post-tax hike consumption pullback, still subdued external demand, and disrupting impact of Typhoon Hagibis, negative GDP growth would be inevitable in 4Q. We maintain the full-year growth forecast a tad lower than the consensus, at 0.7%.

Malaysia: Industrial production index for September and 3Q19 GDP growth figures will be on tap this week. Production output is expected to remain soft at 1.7% YoY, down marginally from 1.9% previously. This comes on the back of a sharp drop in the export data for the same month. September’s exports plunged by 6.8% YoY, the biggest decline in three years. The trade war and an electronics down-cycle continued to weigh down on export and industrial performance. While there have been emerging signs of a trough in global manufacturing activities, the potential improvement ahead will likely remain weak amid a still challenging global economic climate. Industrial output growth will likely remain lackluster in the near term.

Indeed, GDP growth figures for the third quarter will likely reinforce this view. The headline number is expected to register a moderation to 4.5% YoY, down from 4.9% previously. The main drag would still be net exports. Though imports have declined, exports have also faltered against the backdrop of trade war and weak global demand. This will continue to weigh down on the overall GDP growth performance. Moreover, the robust showing in the previous quarter was largely driven surge in private consumption on the back of income tax and GST refund. That phenomenon could prove to be a one-off as investment growth, though likely to improve, will remain soft amid weak business sentiments.

That said, some infrastructure projects that have previously been shelved are now back in the pipeline. Disbursement of funds for these projects may take some time but domestic investment activities could pick up in subsequent quarters. This should help to pick up some of the slack from slightly softer private consumption. But for now, expect slower economic growth in the third and fourth quarter. This should bring overall GDP growth for 2019 to 4.5%, down from 4.7% previously.

Philippines: Given slower growth momentum, Bangko Sentral ng Pilipinas (BSP) has cut interest rate by 75bsp so far this year. We think that BSP is likely to take a pause this time as growth has picked up significantly to 6.2% (vs consensus at 6.0%) from 5.5% in 2Q19, driven by government expenditure (9.6% YoY from 7.3% in 2Q19) and household spending (5.9% YoY from 5.5% in 2Q19). Investment still contributed negatively to growth while net exports maintain its positive albeit small contribution. We see growth momentum might continue to pick up further in 4Q19. Inflation, which has cooled down significantly to 0.8% in October, will stay well within BSP target of 2-4%. Governor Diokno has also hinted that the current rate is close to expectation for this year. We think given low inflation rates, BSP still have rooms to support growth through further cuts in Reserve Requirement Ratio (RRR). As indicated by the Governor before, it is possible to cut RRR by 50bps each quarter should economic conditions permit. In line with policy rate and RRR cut earlier this year, monetary aggregates and lending growth has started to pick up in 3Q19.