The recent upward move in KTB yields was largely due to positive US-China headlines and markets appear to be slow in factoring in the higher supply risks ahead.
Duncan Tan13 Nov 2019

Photo credit: AFP Photo
Since talks of a phase one US-China deal surfaced in early October, the reaction in Korean rates has been sharp and outsized. To put into perspective, Korean Treasury Bonds (KTBs) have sold off more than core bonds (USTs/Bunds) and far more than Asian peers. In our view, KTBs underperformed because of a combination of 1) highest beta to US-China trade outcomes and 2) quite rich valuations in the months prior.

The extent of weakness in Korea's economic data have been considerably worse than Asian peers due to its high exposure to global growth and semiconductor cycles (trade dispute with Japan was a drag too). When sentiments recently improving around US-China and markets bringing forward their expectations of a bottom in Korean economic activity, heavily pinned-down KTB yields were always likely to see a bigger rebound vs yields elsewhere.

Technical factors were likely at play too. We hear of investors going long KTBs (and short KRW) as a hedge against global trade wars, downside risks to China growth, and lower CNY. When headlines started hinting at a China-US phase one trade deal, some of those hedges were likely taken off, reinforcing the surge higher in KTB yields and KRW. 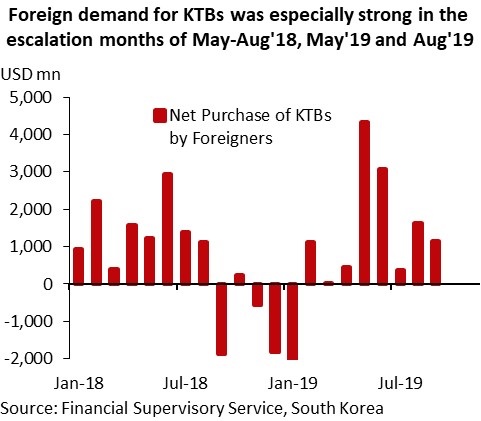 In the short term, we think KTB yields may be overshooting on the way back up. To be sure, we have yet to see a clear turnaround in Korean economic data. For example, exports have been declining for 11 straight months with the latest October print (-14.7% YoY) the lowest in almost four years. Based on a regression model against a number of economic, financial and positioning variables/drivers (x1 - China manufacturing PMI, x2 - Korea CPI, x3 - 3M Korea CD, x4 - Non-comm 10Y UST futures position), we find that current 10Y KTB yields may be as much as 30bps too high. There could be tactical long opportunities if 10Y KTB yields close in on the 2% level. 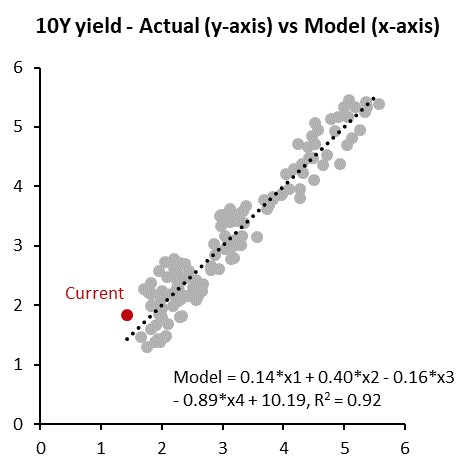 For now, KTBs will likely continue to be primarily driven by the trajectory of US-China trade talks and yields can overshoot further if we get more positive headlines. Considering the likely volatility and the start-stop nature of negotiations thus far, we prefer to stay neutral on KTBs and advise light positioning on duration. 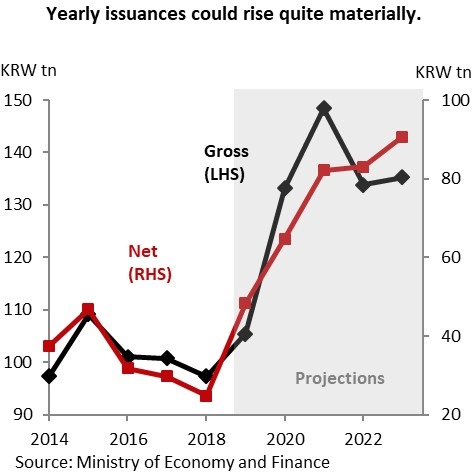 Based on several indicators, we think the recent upward move in KTB yields was largely due to positive US-China headlines, rather than the prospects of larger issuances ahead. If markets start to price for greater supply risks, steepening pressures should intensify on the curve and we would expect KTBs to underperform other Asian low yielders such as Singapore and Thailand government bonds.