October CPI inflation quickened to 4.6% YoY close to our 4.5% forecast and firmer than consensus. IIP declined to a series low.
Radhika Rao14 Nov 2019

October CPI inflation quickened to 4.6% YoY close to our 4.5% forecast and firmer than consensus. India’s recent spell of inflation divergence is akin to China’s where retail and producer inflation as well as headline vs core have moved in opposing directions due to supply-side shocks (pork prices).

Higher food prices drove the headline print past the target due to supply disruptions and a late withdrawal of monsoons, while non-food forces eased. Food (and bevs) segment rose 6.9%, strongest since mid-2016, vs 4.7% month before. A sharp rise in vegetables (onions, tomatoes etc.) was the main driver, which saw food account for all off the increase in the headline. Contribution of non-food components, by contrast, continued to shrink, as has been the case since 4Q18. 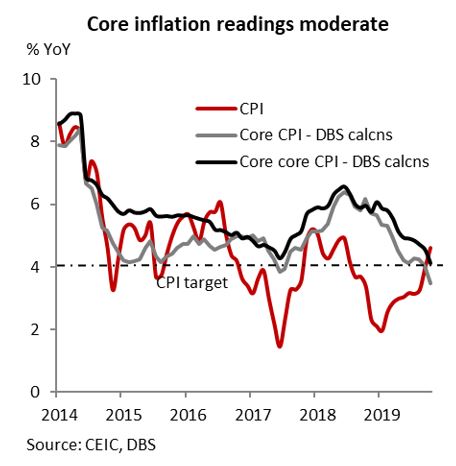 October core inflation has slipped below target to 3.5% YoY, weakest in the current series and confirming soft demand dynamics. Core-core growth i.e. ex food, fuel and precious metals (as shown in first chart) has also receded. Also notable is the yawning gap between wholesale and consumer price inflation. The gap is the widest in two years, with WPI inflation due today expected to decline, weighed also by base effects. 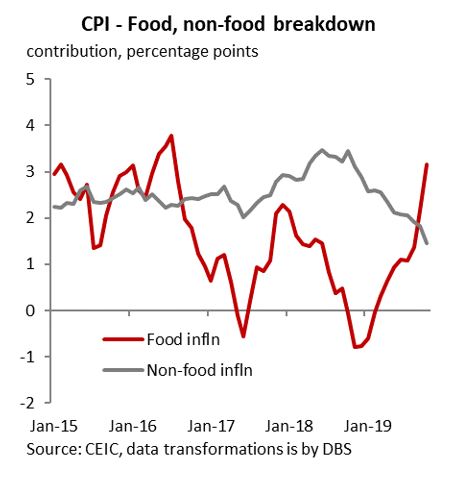 Amongst rural and urban inflation trends, food prices have turned up in both areas, but urban’s has risen by a sharper pace. A positive at the margin is that the rural terms of trade (food vs non-food) has improved marginally in the past two months as farm prices inch up, but sustaining this trend is in doubt. In a bid to quell vegetable prices, the government has stepped up imports, with supplies to hit domestic markets within the week and continue for a month. 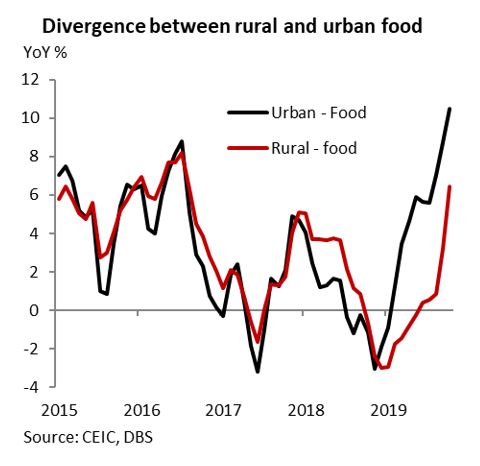 Not surprisingly, the divergence between headline vs core, wholesale vs retail will put the central bank in a bind. Towards this, we note a) unlike past episodes where supply shocks could lead to generalized price pressures, the present spate of weak consumption and soft confidence surveys lower the risks of a broader pickup in prices. This could give policymakers the confidence to ease without worrying over broader rise in inflation; b) full-year inflation is still running below the 4% target. A pause at this juncture could reverse part of the transmission that has occurred through the bond markets, making it an uphill task to convince banks/ markets to pass on previous rate cuts.

With the output gap in negative, dovish policy will stay its course. We expect the weak 2QFY20 GDP report, which will be released before the early-December rate review, to prod the MPC to ease rates by 25bps next month. Official inflation projections might be dialled up a notch, whilst GDP revised down markedly. Our forecasts include another 25bps reduction in 1Q20.

September IIP extended its weak run, taking the 3Q19 average to a series low of -0.4% YoY vs 3% in 2Q. Consensus was pinning on a boost from pre-festive trends, albeit a drop-off in the core industries index and retreat in the PMI-manufacturing index laid the ground for a weak IIP outcome. 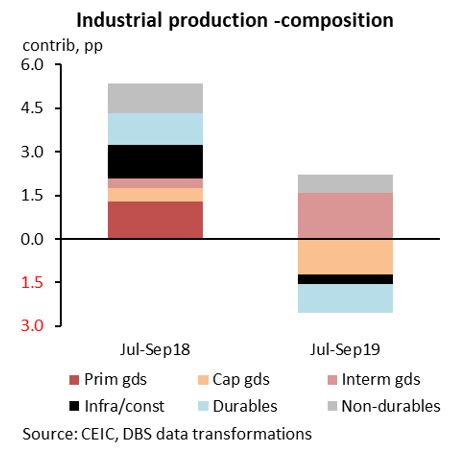 Worryingly, weakness was broad-based, but most acute in the capital goods output at -16.4% YoY in 3Q, after negative prints in 1Q-2Q. The next worst hit were infra/ construction and consumer durables, latter belying expectations of a build-up in inventories ahead of festive demand. Construction activity was further impacted by longer-than-usual monsoon spell. Auto sales witnessed modest MoM improvement on festive demand but is poised to end the year with a double-digit slump.

Considering the seasonality effect from last year’s Diwali which fell in November 2018 (vs October this year), October and November IIP are likely to stay sombre, aggravated by unfavourable base effects. Risks are rising of a miss to our FY20 growth estimate at 5.5% if 2QFY20 (4.3% YoY DBSf) and 3Q stay below 5%. Corrective policy action – by way of monetary easing, surplus liquidity, corporate tax cuts, sector specific support, income transfers etc. – should help arrest further slowdown and allow growth to stabilise at lows.