Chart of the Week : Eye on China government bonds

Foreign institutions’ interest over Chinese bonds is expected to increase alongside a stabilized USD/CNY exchange rate. Net foreign purchase of Chinese treasury bonds surged to RMB30.1bn in November from RMB15.2bn in the previous month. In fact, the Chinese govvies have recorded the 9th consecutive month of net foreign inflows. Looking ahead, optimism over the Phase 1 trade deal should render some support to the Yuan. The upcoming inclusion into a major emerging market bond index should also fuel foreign flows. Shortly after the removal of QFII and RQFII quota, the authority initiated additional reforms on the two investment schemes last Thursday. There is further room for growth. 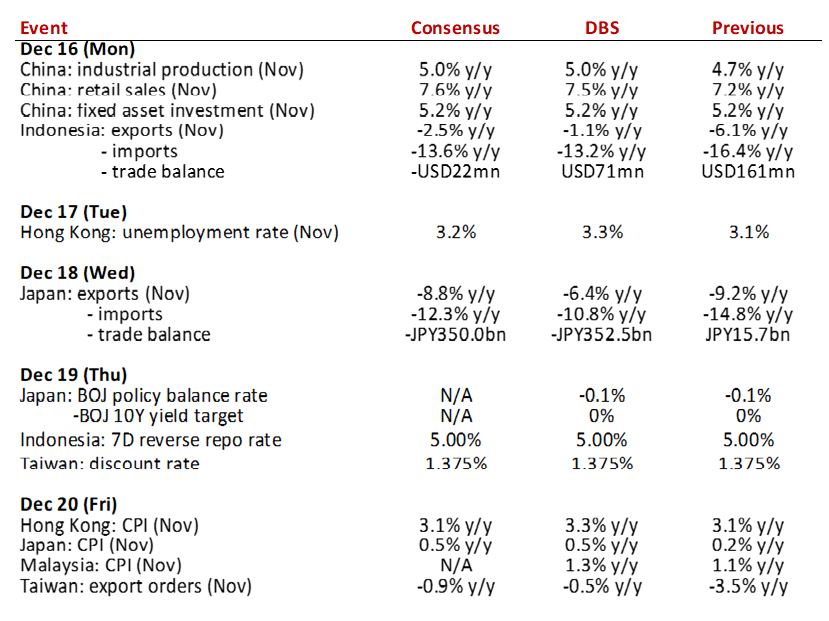 Hong Kong: The unemployment rate is expected to increase further to 3.3% in November from 3.1% in October amid external uncertainty and social unrest. Among all, that of consumption and tourism related sectors (16.5% of labour force) should continue to see more noticeable deterioration. In fact, it has already jumped from 3.4% in February to 5.0% in October. Visitor arrivals dropped 43.7% YoY in October. Hopefully, the temporary rental adjustments for tenants could contain the risks of large-scale closure of businesses and lay-off. On inflation front, the CPI should increase to 3.3% in November from 3.1% in October amid rising import food price. Widespread swine fever ramped up China pork price by 110.2% while substitutes such as beef and mutton also correspondingly jumped 22.2% and 14.3% respectively. Risk of stagflation is rising down the road.

Japan: The Bank of Japan is expected to stand pat this week. The latest economic data have been mixed. GDP growth for 3Q was revised up to 1.8% QoQ saar from 0.6% in the preliminary estimate. But October industrial production and retail sales fell more than expected, by -4.2% and -14.4% MoM sa, respectively. CPI inflation has remained weak at the sub-1% level, but there is little sign that prices momentum is further weakening. To alleviate the impact of sales tax hike, typhoon disaster and export slowdown, the government has announced a JPY13tn fiscal stimulus package recently. This gives the BOJ some more time to evaluate how seriously the growth trend is disrupted by the recent headwinds and whether the loss in inflation momentum is permanent or temporary. We still look for a modest 10bps cut in the BOJ’s short-term policy rate in the next three months.

Malaysia: Inflation figure for Nov19 is due this week and the headline number is expected to creep higher to 1.3% YoY, up from 1.1% previously. Indeed, inflationary pressure is picking up. The impact from consumption tax policy changes will lapse while the removal of price ceilings for fuel and some food items could also prompt higher inflation. As such, monetary policy could be sandwiched between sluggish growth and rising inflation. There is limited room for the central bank to ease monetary policy further given the balance of risks is no longer just tilted towards growth. We expect Bank Negara to remain on hold and maintain the OPR at 3.00% for the rest of 2020 and beyond.

Indonesia: We think Bank Indonesia (BI) will keep policy rate at 5% at this week policy meeting. Bank Indonesia has cut policy rate by 100bps this year, both interbank and lending interest rate have decreased as well. However, the current monetary easing has not translated to higher loan growth due to slow demand especially as investment growth softens. Growth has held up above 5% in 3Q19 and most high frequencies indicators (retail sales, auto sales, consumer confidence and cement sales) have rebounded in the last 1-2 months. Given stronger growth prospects from both consumption and investment, BI is likely to save the bullets for 2020.

Trade balance is also on tap this week. We maintain our view that trade balance will fluctuate around ±500mn toward YE19. We think both exports and imports are likely to continue its negative growth with exports contracting at 1.1% YoY and imports at 13.2% YoY, resulting in a small trade surplus at USD71mn. As investment picks up next year, trade balance might deteriorate due to higher capital and raw material imports. We see a short window for further policy rate cut in 1Q20, before trade deficit starts widening and inflation picks up in the later part of the year.

Taiwan: Chances are high that Taiwan’s central bank (CBC) will hold the discount rate steady at 1.375% this week. There is little pressure for the CBC to cut rates to support growth. Real GDP for 3Q was recently revised up to 3.0% YoY. November trade data also surprised on the upside, with exports posting a positive 3.3% and capital goods imports surging a strong 66.3%. While CPI inflation has remained muted (0.6% in Nov), property prices have made a rebound – Sinyi residential property price index gained 3.3% in 3Q compared to 2.1% in 1Q. If the ongoing trend of growth recovery and asset price increase were to be sustained, the next policy move from the CBC would be a rate hike instead of a cut. As far as 2020 is concerned, we maintain the forecast for the CBC to keep rates unchanged.