In a bid to address the hardening in longer-tenor bond yields since the December policy review and ahead of the Budget, the RBI announced special open market operations on late Thursday. This will involve a simultaneous buy and sale of government securities, worth INR100bn on December 23 - purchasing 6.45% government bonds maturing in 2029 and simultaneously selling the same amount of short-term bonds maturing in 2020 (Operation Twist). Move will be liquidity neutral, unlike traditional OMOs. There was no indication whether it was a one-time exercise or part of continuing operations. Given the scope of likely additional borrowings in early 2020, we reckon more are likely to follow to limit rise in the longer-tenor yields.

Parallels are being drawn to Fed’s Operation Twist (Op-Twist, USD 400bn) that was announced in September 2011 and ran through end-2012. By some measures, the Fed’s policy was effective as the term premium (defined as the 2Y/10Y spread) dropped to a low of 33bps in mid-2012, from around 70bps when it was first announced. However, it should be noted that forward guidance was also dovish. The dot plot, first introduced in early 2012, indicated that policy rate hikes were due more than two years out. This also helped to reduce the premium on longer-tenor bonds.

We expect the INR govvie curve to embark on modest flattening over the coming quarters as the RBI takes steps to reduce term premium. Over the past few months,long-term bonds failed to rally despite further RBI monetary easing, widening the 10Y premium vs the repo rate to 140-150bps. Most of this is driven by fears of fiscal slippage and more recently, indications that the RBI may be on pause after an aggressive cut cycle. 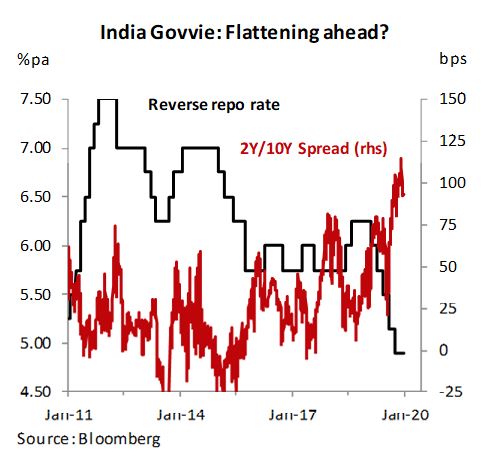 Interestingly, jittery sentiment on INR rates also coincided with a pause in easing by major central banks and bottoming out of yields in the developed world.

The INR curve was (and still is) steep compared to peers and compared over the past decade. We have flagged the likelihood that steepening pressures might give way to flattening pressures, in recent notes. Some of this has played out and we reckon that the authorities may be more comfortable if the 2Y/10Y spread is capped at 100bps (the recent peak of 115bps was registered in early December).

A selloff in the short end of the curve appears unlikely at this point. Short-term T-bills, by contrast, have been trading below the repo rate as liquidity remains ample, allowing the policy rate cuts to pass through. With growth concerns still lingering, it is extremely unlikely for the RBI to reverse gears just yet. Moreover, food prices are the key driver of headline inflation. Unless this phenomenon spills over to the rest of the CPI basket, we still think that the RBI will keep to a dovish bias, anchoring short-term INR rates.

We reckon that this aka ‘Op-Twist’ move is part of broader measures by the central bank to expedite policy transmission, when seen in the broader context of prodding banks to peg part of the loan book to external benchmarks, keep an accommodative policy bias, provide support to non-bank institutions and keeping liquidity ample. More steps are likely to smoothen the liquidity and credit premia aspects of the lending rates to hasten the pass-through of an easy monetary policy.

Minutes from the December review shed more light on the committee’s views backing a unanimous vote to pause in rates. There was a recognition that there was monetary policy space for future action as the stance was maintained at accommodative. Growth-inflation dynamics nudged them towards a pause on rates at this juncture. Highlights of the MPC’s observations:

• Recent increase in inflationary expectations, with the pace being highest in the past three years
• Idiosyncratic rise in food inflation, with moderation expected into early 2021 due to late kharif arrivals, rabi crop and government’s administrative measures. Others pointed to tepid increase in services inflation and risks to broader price pressures.
• Partial transmission in the government securities markets and sharper correction in money market instruments vs longer-term rates and banks’ lending rates was highlighted by nearly all members.
• Views on growth were mixed as few observed green shoots of recovery, while others pointed to the moderating capacity utilisation rates and negative output gap.

Official guidance in December reinforced that movements in the headline CPI will remain the overarching target. Juxtaposing our expectations for inflation to remain above target (peak in January 2020) at least for the next six months, the RBI is likely to stay on hold, before contemplating room for cuts -into FY21. Between now and then, their bias will also be influenced by: a) evolving inflation and growth dynamics; b) February’s Budget where we expect a modest slippage in deficit targets; c) extent of policy transmission; d) liquidity and credit growth.