The US dollar index (DXY) has recovered after having found strong support around 96. We have revised lower our forecast for PH, KR and TH rates.
Philip Wee, Duncan Tan05 Jul 2019

Monetary policy convergence has become the dominant theme after the China-US tariff ceasefire struck at the G20 Summit on June 29. The currencies that depreciated most in the first week of July belonged to countries – South Korea, UK, Eurozone and Singapore – that have either downgraded or intend to lower their official growth forecasts. These countries have also opened the door to ease monetary policy to cushion their economies from a poorer global outlook weakened by the escalation in China-US trade tensions in May-June. 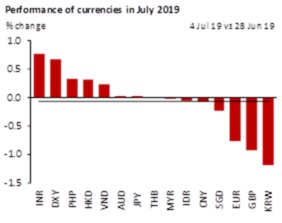 The US dollar index (DXY) has recovered after having found strong support around 96. The monetary policy tone in DXY’s major components, the euro and the pound, remain very dovish. The Fed has pushed back against political and market pressures for an aggressive easing this month. Record high US stock markets amidst a cooling of trade war risks have also unshut the door to keep the powder dry. Barring negative surprises in tonight’s US monthly jobs report, Fed Chairman Jerome Powell’s semi-annual testimony on Capitol Hill on July 10-11 may become a key event risk for USD bears and bond bulls.

We have brought down some of our Asian interest rates forecast. For Philippines, 2Y and 10Y rates are revised lower by 65-75bps, largely a marking-to-market against the massive rally in RPGB bonds. In 2019, 10Y RPGB has returned ~20% (bulk of returns came from price, minimal contributions from coupon and FX). While we expect Bangko Sentral ng Pilipinas to ease policy ahead (policy rate cuts, reduction to banks' reserve requirement ratios) and inflation to moderate further, we think rates are unlikely to move much lower. Current spreads against US Treasurys, a proxy for risk premium, are around fair (we believe 250-350bps range to be appropriate). Furthermore, with considerable uncertainties over global trade and growth, we are wary that any sharp deterioration in risk sentiments could disproportionately hurt high-beta bonds like RPGBs. 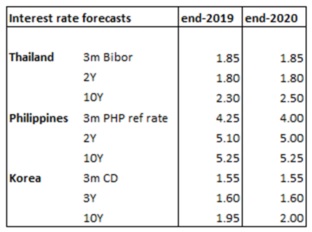 For South Korea and Thailand, the revisions are much more modest. Both Bank of Korea (BOK) and Bank of Thailand (BOT) clearly stand out amongst regional and global central banks. Concerned by high household leverage and financial stability risks, they have yet to tilt dovish or give any clear signals of possible easing. With no noticeable improvements in economic momentum, one wonders how much longer can both hold out against the global wave of central bank dovishness.

BOK’s reluctance to consider rate cuts is keeping markets guessing and Korean front-end rates volatile. Current levels are probably too low (3Y tenor at ~1.40%) due to markets' overly aggressive pricing of BOK rate cuts. We have penciled in only 1 cut in 3Q19 with none thereafter through end-2020. 3Y rates should grind higher to ~1.60% level.

10Y Thai rates are likely to trade in a tight range around US rates. BOT's relative hawkishness vs US Fed argues for higher Thai vs US rates. However, that could be offset by possibly substantial bond inflows ahead, investors likely drawn to greater political clarity post-elections and strength of the Baht (ytd 2nd-best in EM, just behind RUB).