For the US Federal Reserve and the markets, the line between a strong economy entailing monetary policy normalisation and a too-hot economy requiring cooling through sustained rate hikes is thinning. The combination of 7.5% headline CPI and nearly 5% core PCE inflation is uncomfortable, irrespective of the fact that wages and jobs growth are robust, the economy is dealing with pandemic related ebbs and flows with decreasing volatility, and households and businesses are still finding ample credit, both with respect to price and quantity. 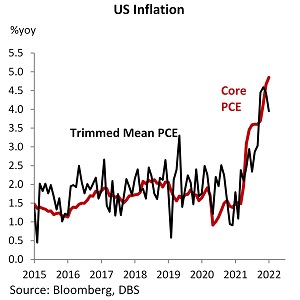 We are sure the Fed would want to pursue a smooth glide path to rates normalisation, as opposed to shocking the markets and the economy with an inter-meeting rate hike this month or a 50bps rate hike next month. But the chance of either transpiring is nontrivial, as the pressure to send a clear signal on the need to fight inflation is increasing by the day.

Where do we stand? We remain convinced that the supply side drivers of inflation--oil price, chip shortage, and port bottlenecks--will be resolved through the course of this year. We also believe that fiscal policy will act as a major restraining factor to demand this year as many pandemic-era support measures are removed. Consumers’ astonishingly strong demand for discretionary goods is also bound to ease this year as services open up.

But there remain numerous areas of concern. What if skills mismatch keeps pushing up wages? What if services charges spike as consumers flock to restaurants, spas, flights, and hotels? What if companies become convinced of sustained goods demand and get entrenched in a cycle of raising prices?

As far as risks to wages, services, and housing are concerned, the Fed can readily address them through its messaging and rate hikes. We think therefore it is time for us move past our previous call of three hikes this year to five.

Given the nature of the pandemic, idiosyncrasies of the labour market, and various global factor driving a large part of the inflation process, we very much doubt that past cycles would be indicative of this one. We will not be shocked by a 50bps hike in March, but the base case remains a soft liftoff, followed by another four hikes in consecutive meetings. A total of five rate hikes this year, amounting to 125bps (compared to the 75bps previously called by us) would take the policy stance back to the first quarter of 2018, a period when wage growth and inflation were substantially lower.

On the inflation front, even after taking into account the pipeline deceleration in inflation due to base effects and expected supply chain normalisation, the US economy will likely have to contend with 3% core PCE inflation 12 months from now, which would almost certainly warrant further hikes in 2023, perhaps by an additional 50-75bps.

One way to parse through the uncertain outlook is consider a range of scenarios ahead:

This is the best of all worlds, with commodity and shipping costs peaking in Q122, paving the way for core PCE inflation to fall below 3% by the end of the year. Growth remains strong and unemployment falls below 3.5%, with the labour force participation rate rising to pre-pandemic levels. Against this backdrop, the Fed steadily raises the upper bound of its funds rate to 1.50% through the course of the year, pausing in quarter four to assess the impact and the outlook, leaving room to raise further in 2023. Company earnings and asset prices remain well supported under this scenario.

This is a more challenging backdrop, under which the rate hikes prove to be come in a tad too late, leaving wage and price dynamics unchanged through the year. As a result, core PCE inflation remains well above 3% and jobs market stays strong, forcing the Fed to give stronger signals toward sustained rate hike and expediting quantitative tightening. This becomes a headwind for asset prices, the investment outlook becomes uncertain, and real  GDP growth stumbles in the second half of the year. We find it hard to separate the probability of this scenario from the one articulated earlier.

Under this scenario, with no respite to energy and shipping prices, coupled with evidence of wage growth acceleration, the market takes the view that the Fed is substantially behind the curve. This then translates into fear that nothing short of a prolonged string of rate hikes, which pushes the economy into an outright or near-recession, would bring inflation under control. The Fed hikes in every policy meeting, including once by 50bps, pushing down investment, consumer spending, jobs and wage growth. Inflation however remains high as policy works through lags. The outlook for inflation in 2023 improves, but at the cost of a sharp loss of growth momentum. This scenario would most likely come with a sharp correction in asset prices. 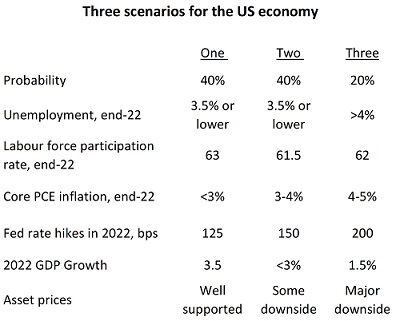