At this point, we really don't see much necessity or urgency for Asian central banks to quickly hike rates, as is implied by market pricing.
Duncan Tan, Eugene Leow23 Mar 2021

Since February, Asian rates/bonds curves have cheapened significantly, via higher levels and steeper slopes. A large part of the move has undoubtedly been a straightforward beta reaction to the bear-steepening in US rates. There has been one aspect though where the Asian move has differed from the US. In Asia, front-end swaps (IRS/OIS) up to 2Y are now pricing for Asian central banks to hike several times by end-2022. Comparatively, USD swaps and Fed Fund futures up to 2Y are much more anchored because of the Fed's dovish forward guidance. As a result, Fed hike expectations are being largely priced into the 2Y to 5Y segment (ie 2023 to 2025). 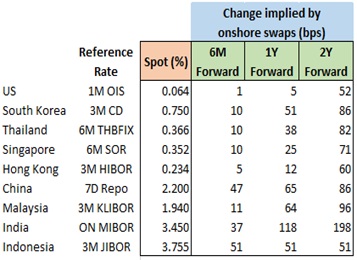 Broadly speaking, we think that hike pricings may have gotten overly aggressive for Asia, both in terms of liftoff timing and pace of subsequent hikes. Especially, we disagree with market pricing that the next Asian hike cycle would start much earlier than the Fed's own cycle (ie before 2023).

Some peer EM central banks have started hiking rates recently, and in a big way. Last week, central banks of Brazil and Turkey hiked by 75 and 200bps respectively, to respond to considerable risks around inflation, fiscal and currency. However, from a macro stability perspective, we think Asia is in a relatively much stronger position, and thus have the flexibility to more gradually normalize monetary settings.

Within the region, inflationary pressures are generally benign with several countries still in deflation (Malaysia, Thailand). There are also no visible external funding risks or BOP stress - Current accounts could weaken slightly if imports normalize further, but the considerable accumulation of FX reserves in recent quarters should allay fears. Meanwhile, household leverage is elevated in only a couple of countries (South Korea, Malaysia) but do not appear to pose imminent risks. 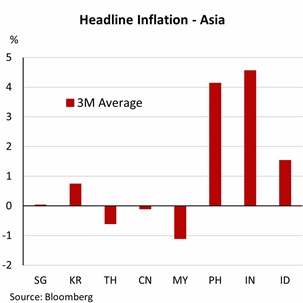 A few central banks may still need to support government financing by absorbing supply or capping yield levels (Indonesia, India). If done in moderate amounts, we do not think market participants should be too concerned. Lastly, vaccination progress is generally slower across EM/Asia. Accordingly, we would expect regional central banks to continue signalling an accommodative stance to support the domestic recovery.

At this point, we really don't see much necessity or urgency for Asian central banks to quickly hike rates, as is implied by market pricing. Therefore, we prefer to receive 0 to 2Y Asian swaps, to fade the recent rise and bringing forward of hike expectations across the region. The following are three of our preferred ideas.

For China, we expect PBOC's 7D Reverse Repo rate to be unchanged and 2-way fluctuations in 7D Repo fixing to average in a 2.20-2.30% range, over the next 12 months. We recognize that PPI has been climbing on the back of rising commodity prices, but think that the prospects of rate hikes would be restrained by low CPI, due to the lagged recovery in domestic consumer demand and labour markets. The 27-37bps premium in 1Y CNY NDIRS (2.57%) over our projected fixing range is also expected to be more than sufficient to cover the occasional episodes of funding volatility. If China's growth momentum were to moderate or concerns over SOE/corporate defaults were to surface again, our position could benefit from liquidity injections that would depress the 7D Repo rate. 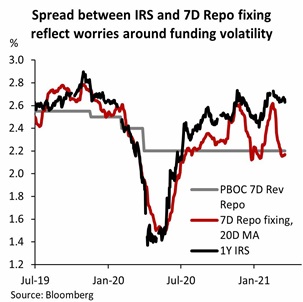 For India, 1Y and 1Y1Y onshore OIS rates are implying that liquidity conditions would be fully normalized via ON Mibor fixing (3.45%) converging towards RBI Repo rate (4%), and RBI would also hike around 50-75bps over FY 2021/22 and 75bps over FY2022/23. We judge that a large portion of the pricing likely reflects significantly increased inflation risk premium, considering that headline inflation has been persistently above the 4% target and global crude oil prices have been climbing in recent months. But we think that market pricing is way too aggressive, relative to our policy forecast, even if we factor in some inflation volatility ahead. Furthermore, we expect RBI to maintain an active role in ensuring government's borrowing programme proceeds smoothly and bond yields are capped. To those ends, an aggressive rate hike cycle would not be conducive. 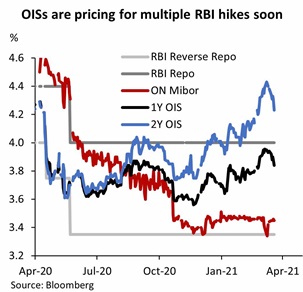 For South Korea, onshore IRS markets are pricing for a relatively shallow, but frontloaded BOK hike cycle - 50bps hike over the next 12 months, further 50bps thereafter. We acknowledge that South Korea has one of the fastest economic recoveries from the COVID-19 shock (exports supported by strong global electronics demand). However, we think that 50bps of BOK hikes over the next 12 months looks quite stretched - There is little scope for hike pricing to be raised further (eg to 75bps). Therefore, we like to receive 1Y NDIRS to position for some extent of reversal. In addition, basis between 3M CD-BOK Base Rate remains elevated at 25bps, and could normalize ahead to 14-15bps levels that are closer to historical norms, benefitting our position in the process. 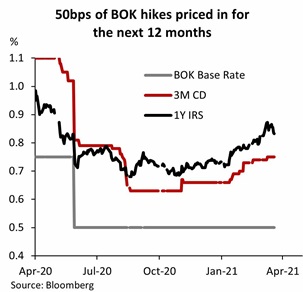 On CNY and KRW NDIRS ideas, we stick with 1Y and refrain from going out to 2Y. Both China and South Korea have outperformed, in terms of their economic recoveries. We are wary of the risk that central banks and policymakers, in both countries, could turn less dovish in their stance, closer to end-2021/start-2022.