Separately, India will be placed on the watchlist for potential inclusion into the smaller Emerging Markets Government Bond Index (EMGBI). In the coming weeks, FTSE Russell also intends to launch an index to track 5, 10 and 30-year GSecs issued under the Fully Accessibility Route.

CGBs' phase-in period will span 36 months, commencing with an effective date of 29 October 2021. Based on the upcoming April profile, 47 bonds with an amount outstanding of CNY8,999bn would be added, and would make up 5.25% of the WGBI.

The confirmation of inclusion outcome for China was widely expected by market participants. Though, there were two slight disappointments. Announced index weight of 5.25% came in lower than our prior estimates. The lower weight is due to a change to the minimum amount outstanding criteria where the threshold for CGBs issued before 1 January 2020 has been increased to CNY100bn from CNY35bn. If not for the change, we estimate China's index weight would be higher at ~6.5%. The 36 months phase-in period is also much longer than the 12 months that was communicated in the September 2020 Review. All considered, foreign inflows are less important drivers of CGB price (relative to domestic factors) and the market impact of FTSE Russell's announcement should be negligible.

Based on estimates of AUM tracking the WGBI, we estimate passive inflows of USD120-140bn into CGBs upon full inclusion. This would represent another major boost to foreign buying of CGBs, especially since the inclusion processes for BBGA and GBI-EM indices were completed a few months back.

For our near-term outlook, we are projecting foreign CGB inflows to be rather uneven over the next 12 months. In particular, in 2Q, we expect foreign investors to shift to a much more cautious stance on CGBs due to several factors. China's yield attractiveness has weakened considerably - 10Y differentials against US and Asian peers have compressed 60-70bps YTD. 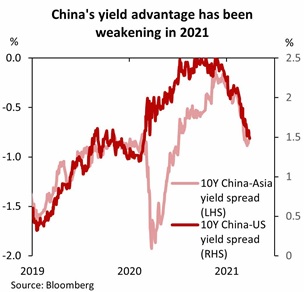 Coupled with some CNY depreciation in 2Q that our FX strategists are forecasting, 2Q could be a relatively weak quarter in terms of CGB total returns (prospective). Some market participants are also slightly apprehensive around an expected ramp up in central and local government bond issuances in 2Q, and hence, could opt to stay on the sidelines. Therefore, we are projecting 2Q foreign inflows to come in low at ~USD5-6bn (monthly average).

In 3Q, we expect foreign interest to improve on the back of some prepositioning flows and inflows are expected come in at ~USD6-7bn (monthly average). In 4Q, when WGBI phase-in process will start, we project foreign inflows to surge to ~USD8-9bn levels. 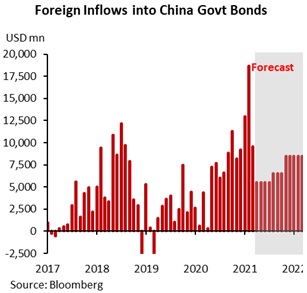 In China Rates: Comfortable with duration published earlier this month, we had explained our comfort with CGB duration and stated our bullish conviction that CGBs would deliver positive absolute returns (in an environment of rising global yields) and outperform peer Asian bonds. We continue to see long-tenor CGBs as bonds we would favour holding through year-end, rather than a short-term tactical call. Therefore, we are unfazed by and don’t see the need to sidestep the potential 2Q headwinds outlined above. In our view, there is scope for 30Y CGB yields to decline 5-8bps ahead. Local governments are expected to reduce their long to ultra-long issuances in 2021, which would lead to some redirection of duration demand from LGBs to longer-tenor CGBs. Idea 1: Long 30Y CGB (3.72% yield)

Malaysia's removal from the watchlist (for potential WGBI exclusion) is a huge positive for the outlook on foreign MGS/GII inflows, on two aspects. One, worries of exclusion has been overhanging for the past 2 years. An exclusion scenario and the potential outflows it entails, should be seen as a tail risk for MGS/GII, because of high foreign ownership levels (USD50.8bn at end-Feb) coupled with Malaysia's lower FX reserves adequacy, relative to Asia peers. Two, foreign investors will be crucial to the government's issuance plans in 2021, as we expect a reduction in key domestic buyers' capacity to accumulate more government securities. Domestic banks have not net added to their holdings over the last 6 months. Employees Provident Fund's holdings have declined over the course of 2020 and we expect that trend to extend into 2021, largely due to liquidity needs arising from i-Lestari and i-Sinar withdrawal facilities (provision of financial relief to members).

We are however wary of making a long MGS call, because we think MGS yields are biased to rise further alongside global yields. In March, we note that 5Y bond-swap (MGS-IRS) spreads have sharply widened ~20bps, a move not seen in other Asian bond markets. This could have been driven by foreigners' bond selling on MYR depreciation in March or de-risking ahead of FTSE Russell decision. The MYR20bn PEMERKASA stimulus package announced in mid-March also likely drove markets to reprice for higher bond supply this year, and hence a wider spread. We think that today's positive FTSE Russell announcement will result in an improved outlook on MGS/GII total returns potential, and hence could drive a reversal of the spread widening. Trade idea: 5Y bond-swap (MGS-IRS) spread to compress 10-15bps 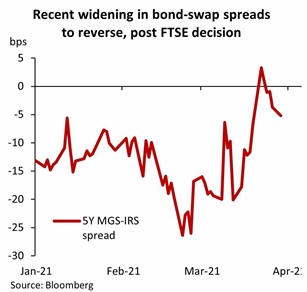