The economy recorded a strong recovery from the pandemic with GDP growth registering 7.6% in 2021. While the recovery is expected to become more broad-based with further easing of restrictive measures and reopening of the borders, economic normalisation remains at work, which makes for a slowdown in growth momentum.

China is also a critical factor to watch on the growth front, amid spikes in domestic infections, the resulting lockdowns in key cities amid its zero Covid policy. This will have profound implications on the prospects of Singapore’s manufacturing sector, which thus far has been the main engine of the recovery. In the immediate term, risks from the Russia-Ukraine war continue to linger but the direct impact on growth in this regard remains limited. Our full-year GDP growth for 2022 remains unchanged at 3.5%, and first-quarter growth is expected to ease to 3.6%, from 6.1% in the previous quarter.

Inflation will be the key risk in 2022 amid rising global price pressure. A strong global recovery, supply-side bottlenecks and more recently, the Ukraine-Russia war have driven global commodity prices significantly higher. Such elevated imported inflation will spill over into Singapore’s domestic price dynamics. Juxtaposed with an already tight labour market and an increasingly positive output gap, domestic inflationary pressure will remain high throughout 2022.

We expect headline inflation to average 3.8% in 2022, higher than the official forecast range of 2.5%-3.5%. The price barometer will likely hover around the 4% level in the coming months before tapering off on a high base effect towards the end of the year. Core inflation is also projected to be higher at 3.0%, up from 0.9% in 2021. And to add to the concern, the upcoming GST hike in Jan23 may further exacerbate the price pressure. Hence, there is an urgency for policymakers to buffer imported inflation and anchor inflation expectations.

We look for a third steepening in the slope of the SGD NEER policy band to 3% at next week’s policy review. According to our model, the Monetary Authority of Singapore (MAS) first steepened the slope to 1% last October, and later to 2% at an unscheduled meeting on 25 January. The current landscape is similar to October 2007 and October 2010 when the slope returned to 3%. First, Brent crude oil prices have been above USD100 per barrel since March. Second, the MAS core inflation has risen above 2% YoY since December. 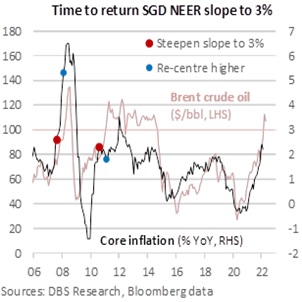 We expect the authority to keep the door open for another tightening in October. The MAS could re-centre the policy band higher six months after returning to a 3% slope, as they did in April 2008 and April 2011. Core inflation peaked at 6.5% in mid-2008 from 2.9% in October 2007 and at 3.5% in Jan 2012 from 2% in October 2010. Except that we have shocks from Russia’s invasion of Ukraine this year, from spikes in energy and food prices to prolonging supply-chain disruptions. Hence, the Ministry of Trade and Industry and the MAS might be too optimistic in expecting core inflation to pick up further to 3% around mid-year before easing in 2H22.

We don’t see a compelling reason to widen the SGD NEER policy band. The last time this happened was in October 2010, alongside the return to a 3% slope. The SGD was under excessive appreciation pressure from a USD crisis that resulted in America losing one of its triple-A debt ratings in August 2011. Today, there is no such pressure, as evidenced by the SGD NEER holding 0.6% above the mid-point of its ±2% wide band. More importantly, USD/SGD has been stable within a 1.32-1.45 trading range after the currency war in 2015.

Since mid-2021, USD/SGD has fluctuated between 1.34 and 1.37 despite a stronger USD Index (DXY) fuelled by an increasingly hawkish Fed policy outlook. The stability in the exchange rates of Singapore's Asian trading partners most likely contributed to the SGD's resilience. However, these Asian currencies, including the CNY, are likely to succumb to USD strength in the quarters ahead. After the first Fed hike last month, DBS forecasts the Fed Funds Rate rising sharply from 0.50% to 2.50% by the end of this year. Hence, we cannot dismiss USD/SGD trading in a wider 1.34-1.39 range like 2018-2019.

We think that upcoming MAS tightening is already expected by the market and are not convinced that there would be a large move if the SGDNEER slope gets steepened and / or re-centred again.

Our view of SGD rates outperformance due to twin tightening (by both the Fed and the MAS) played out to a large extent in the shorter tenors. For the 2Y tenor, the spread of SORA over SOFR dipped as low of -48bps on 21 March, from a premium of 2bps in early January. A similar trend was also observed for the 5Y and 10Y tenors. More recently, there has been a slight retracement of this trend as SGD liquidity stayed somewhat tight. We are also somewhat wary that pay SOFR, receive SORA trades (especially for the shorter tenors) may be a tad crowded heading into the MPC meeting.

Going forward, we still think that SGD rates outperformance would be the key theme, however, levels, tenors and timing need to be picked. We think establishing these trades could be better in the longer tenors (10Y) where SGD rates still show a premium over USD rates. In terms of timing, there might be profit taking for crowded positions post MPC meeting, Accordingly, there could be better levels after these positions get cleared.