Bank Indonesia left the seven-day reverse repurchase rate unchanged at 3.5%, besides reiterating its accommodative stance. A reduction in the BI’s global growth expectation follows cuts to projections by the World Bank (and likely IMF) in recent weeks as challenging geopolitics, policy normalisation and China’s strict zero-Covid strategy pose risks to the outlook. BI also marked down Indonesia’s 2022 growth forecast range marginally to reflect caution over an unfavourable global environment, and softer rebound in domestic demand. Inflation is still seen within the 2-4% target range, with policy commentary suggesting that the central bank is unlikely to act in haste and watch for persistence of high inflation, particularly core, for any decisive shift in policy direction.
Economic assessment
A cut in the global growth projection to 3.5% (vs 3.8-4.2% at the March review) was accompanied by a marginal reduction in Indonesia’s growth forecast to 4.5-5.3% vs 4.7-5.5% previously. Our forecast stands at 4.8% yoy. The central bank opted to be cautious on the trade outlook, saying that export volumes were at risk down the line due to the Russia-Ukraine conflict, suggesting that the central bank is opting to be stay cautious on the trade/growth outlook.
Nonetheless, strong year-to-date performance nudged them to call for a narrower current account deficit at -0.5% to -1.3% compared to -1.1% to -1.9% held at the last review. Our assessment on the external balance is more optimistic, with a string of strong trade surpluses, including in March, expected to result in a second consecutive year of a small current account surfeit this year.
On inflation, Governor Warjiyo highlighted that they will be ‘very careful’ in interpreting inflation and their focus was on core inflation and second round effects, rather than administered price increases. Despite this dovish hold, we expect policymakers to be mindful of price pressures, especially gains in core prints. Domestic inflation is contained when parallels are drawn with Thailand and Philippines in the region, but upside risks cannot be dismissed given several moving parts, especially a potential increase in the commonly used fuel variants and persistent imported pressures.
Outlook
The urgency for imminent action is low as inflationary risks are contained, in the central bank’s view. Additionally, hawks are also restrained by a positive real rate buffer and relative rupiah outperformance vs regionals, providing the BI with adequate headroom to extend its accommodative bias in the near-term. The real rates cushion has nonetheless narrowed vs last year (see chart).
Based on our expectations of a gradual updrift in core inflation in the coming months, the central bank might consider a shift in its tone towards end-2Q and hike in 2H. Also of note will be the US Fed’s aggressive rate tightening cycle, which is expected to gather speed this quarter. 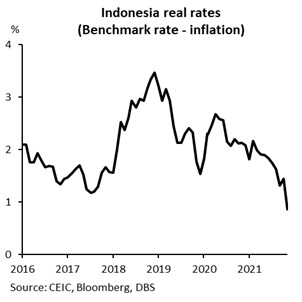 Inflation is a risk
Inflation is likely to be a key watch point for Indonesia, as it is for rest of the region. March CPI inflation had quickened to 2.6% yoy – strongest since Apr20, vs 2.1% in Feb, with the sequential pace rising 0.7% from a flat reading month before. Core inflation also ticked up to 2.4% yoy vs Jan-Feb average 1.9% yoy, on rent house tariff, and precious metals segments. Administered price was up 3.1% (vs 2.3% in Feb) and energy index up 2.1% (vs 1.2%). The sub-components pointed towards a broad-based pick up, including food up 3.6% yoy vs 2.5% month before, on higher cooking oil (as price ceilings were lifted), chillies, protein etc. Amongst non-food segments, contribution to the headline is rising from clothing & footwear, utilities, health, transportation, and recreation.

Into April-May, inflation momentum is likely to have quickened further due to the seasonal Ramadan festive period, with ‘mudik’ (movement of labour/ migrant workers from cities to their hometowns/ provinces during festive periods) also permitted for the first time since the pandemic outbreak. High-octane fuel prices have also been raised, alongside increase in the value-added-tax rate. Concurrently, a falling Covid count has also translated into better mobility, improved employment prospects (on reopening and open international borders) and pickup in confidence, stoking demand-pull pressures.
There are several pipeline risks: 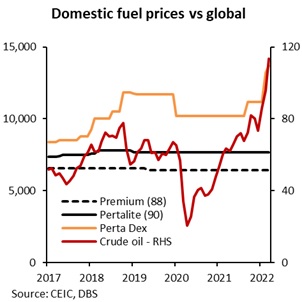 Direction for inflation this year, to a large extent, hinges on the longevity of price controls and subsidies. Partial pass-through to domestic retail prices as well as second order effects and demand normalisation after the pandemic abates, nudges us to revise up our inflation forecast for 2022 to 3.6% yoy from the current 3.0% and maintain 2.5% for 2023.
Benefits from positive terms of trade
A material fallout of Russia’s invasion of Ukraine has been on global commodity prices. For Indonesia, this is a mixed blessing, positive for trade and external balances, but negative for inflation. We discussed this for Indonesia in Bank Indonesia to stay patient, watching inflation and the larger ASEAN-6 bloc in ASEAN-6: Assessing the impact of oil and geopolitics.
Even as Indonesia is a net oil importer, this deficit is negated by strong gains in the non-oil & gas sectors, particularly coal, palm oil, nickel, base metals etc, via the aggregate positive terms of trade advantage.
Even before the latest surge in commodity prices, last year’s buoyant trend last year mineral fuels rose above 70% yoy, followed by manufactured goods (including palm oil) up 53%, coal up 90%, amongst others. These gains have spilled over into this year.
March 2022 trade numbers were a good mix, with exports growth up a record high 44.4% yoy, accompanied by imports up 30.9%, which resulted in a trade surplus of $4.5bn vs $3.8bn, highest in five months. A wider O&G trade deficit was offset by a sharper increase in non-O&G surplus. O&G (oil & gas) shipments rose 54.8% yoy, but imports were up 53% on the year, resulting in a trade deficit widening to $2.1bn vs $1.9bn month before. Jan-Mar22 trade deficit doubled to $5.3bn vs $2.5bn last year. Non oil & gas surplus rose to $6.6bn vs $5.7bn on higher non-oil commodity shipments. Exports - mining (and others) rose 144% yoy, manufacturing 30%, agriculture 7.7% in March. Coal exports rose 150% on value and 22% by volume. On the month, coal shipments jumped 41% on higher purchases by China, India, the Philippines, and Europe. Nickel jumped by triple digits, whilst palm oil fell by a small extent presumably on restrictions.
Under imports, easing restrictions allowed for consumer goods to rise 26% yoy, raw materials 31.5% and capital goods up 30% yoy, likely also fuelled by festive led demand. Indonesia is on the right side of the ongoing commodity rally, benefiting from its positive terms of trade impact. String of strong trade surpluses, including in March, will certainly boost the external balance and result in a second consecutive year of current account surfeit for the economy. A relatively stable rupiah, compared to the regional currencies, is also reflective of its improved external position.
Export gains will nonetheless be punctuated by domestic policy changes for instance, temporary steps to ensure adequate domestic stocks of key commodities including coal and palm oil or levy export taxes, in the face of surging international prices. Overall, terms of trade will boost the trade balance, and current account by extension, implying that the 2022 current account might print a modest surplus for a second consecutive year to the tune of 0.4% of GDP vs our earlier forecast of a deficit to the tune of -0.4-0.5%.