Thailand is facing a sharp resurgence in Covid cases. April accounted for half of the total caseload.
Radhika Rao11 May 2021

Swept up by a fresh Covid wave

Thailand had fared better than most ASEAN neighbours in 2020 in gaining an early upper hand on the pandemic and maintained a smaller total case count. The country also met success in containing the second wave in late 2020-early 2021, but the latest Covid wave, which started in April has been quicker and broader in scope compared to the previous outbreaks.

As highlighted by the chart below, the daily case count has surpassed the previous peak, with key clusters comprising of contact-intensive industries including restaurants, nightlife entertainment venues etc. April has accounted for half of the total caseload, along with a tripling in fatalities. 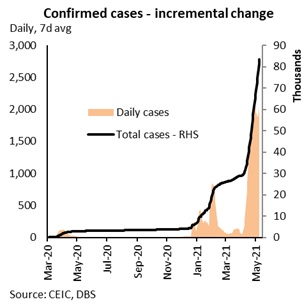 To counter the spread, the government has deployed localised, and area-based restrictions. While less punitive, we expect this round of measures to last longer than previously given the higher intensity of the wave, fears over mutations of the virus as well as a risk that the domestic medical infrastructure might come under pressure if the case count does not subside soon, therefore necessitating a relook at the economic assumptions. Impact on mobility has been notable – discretionary and non-discretionary, hurting consumer sentiments more materially, with some spillover into private consumption demand beyond 1Q21. 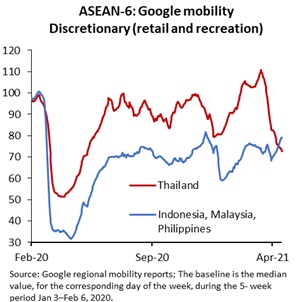 Two potential sources of support - vaccination rollout and turnaround in the economically crucial tourism sector, are likely to be under a cloud for longer than previously envisaged, owing to the recent Covid wave. Even as fiscal support and exports can offset part of the impact, we see reason in recalibrating our growth expectations.

• Vaccination – a slowing moving variable: The rollout has been gradual having administered less than 2mn doses and covered <1% of the population by mid-May. Current supplies are dominated by Astrazeneca (in the total ~65mn supply) and to a smaller measure China’s Sinovac, with the government targeting 10mn more from these suppliers. A material increase in supplies is only likely in 2H 2021, which includes efforts to widen the alternative basket to Pfizer, Sputnik V and Johnson & Johnson for additional supplies for the national rollout. Private companies have been advised to procure from other manufacturers, including Moderna and Sinopharm. Given the weaker near-term supply pipeline, the risk of missing the targeted population by end-year, is high.

• Slower vaccination and largely closed international borders have hampered a quick turnaround in Thailand’s economically crucial tourism sector (which along with allied sectors makes up 20% of GDP). 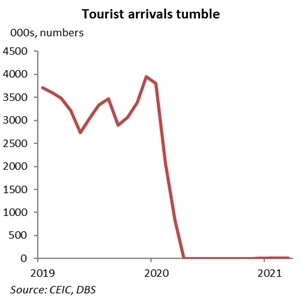 Restrictions on visitors have been reintroduced, including an extension in the mandatory quarantine period for all arrivals who have received entry permits, in light of the recent outbreak. The government forecasts 2mn tourist arrivals this year from 5mn earlier (vs 39mn in 2019) and receipts of US$9.6bn (vs US$60bn in 2019) face downside risks, as 2020 drew less than 7mn arrivals, majority of which was before March 2020. The pilot scheme to allow vaccinated tourists access to Phuket, which accounted for a quarter of the total arrivals in 2019, from July and ten other provinces (Bangkok, Koh Samui etc.) from October remains in place, banking on inoculation of at least 70% of the residents by then. These plans face potential hurdles due to a staggered vaccine supply pipeline, wary travellers, and largely still-closed borders in midst of multiple waves affecting different countries.

Fiscal support and external sector can pick part of the slack but will be unable to completely offset the potential output loss owing to the recent wave of the pandemic. The government had issued a special law to borrow THB1trn in April 2020, with ~92% of the borrowings already completed (facility will remain in place till Sep21).

Fresh measures are still under consideration, with the first phase likely to be pegged at THB85.5bn consisting of a) THB67bn cash handouts, b) THB18.5bn cash handouts under the social security system, c) THB16.4bn for welfare card holders etc. The next phase of measures worth THB138bn is likely to be doled out in July as this Covid phase ebbs, taking the cumulative support, by the government and private sector, to THB400bn. There is likely some concern amongst the official circles over breaching the public debt ceiling of 60% of GDP, which is likely to be approached this year. Debt sustainability worries are likely at bay given Thailand’s positive track record and prevailing low borrowing costs. Concurrently, 1Q export growth returned to black at 5% y/y but was surpassed by higher import growth, leaving the trade balance with a smaller surplus. Shipments in auto, agro, electronics, chemicals and chemical products are few segments that have fared well, with y/y growth also buoyed by base effects.

Amongst the other growth drivers, consumption is likely to stay lacklustre, primarily for non-durables (while durables fare better), also hobbled by drought conditions, and services, alongside soft retail sales. 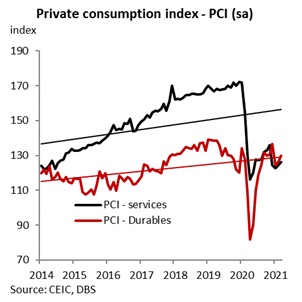 Investment growth trends are mixed, with public sector likely in the lead whilst private sector participation lags. Combining a below-target inoculation drive combined with delayed revival in the tourism sector, we temper our 2021 growth forecast to 2.1% y/y compared to 2.9% earlier, whilst dialling up 2022 to 3.5%.

The Finance Ministry trimmed its 2021 forecast to 2.3% from 2.8% last month. The BOT highlighted risks to its 3% forecast earlier this month, outlining 1-2% range as a likely scenario. The bank extended its cautious tone on the economy’s outlook, including a likely delay in border reopening as cases spike locally as well as in multiple pockets globally, whilst the vaccination rollout hits speed bumps. Policy guidance is unlikely to deviate from recent rate reviews, highlighting the available room to act, but preference to hold back ammunition for the time being.

Thai Baht is under a cloud, depreciating 3.5% against the dollar year-to-date, worst performer compared to Asia ex Japan currencies, on the back of portfolio outflows from the equity markets, whilst bonds hold up better. The currency’s underperformance is, however, unlikely to be a bother for the policymakers, as the unit largely reflects this year’s subdued growth prospects as well as is beneficial on the grounds of trade competitiveness.