Amidst inflationary concerns globally and food security assuming priority, several countries have taken measures to ensure sufficient domestic stockpiles to help contain prices, and lower hardship amongst the populace. Globally, since the Ukraine crisis, about 16.9% of the share of global trade impacted (by calories) has faced some extent of food export restrictions, higher than in wake of the pandemic as well as 2007-08 crisis. Since Mar20, about 19 countries have imposed an actual ban, whilst seven have imposed export licensing (see chart), according to data from International Food Policy Research Institute. 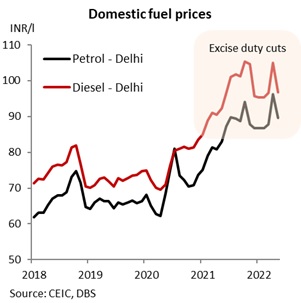 This fuel tax cut along with reductions in November 2021 effectively unwinds tax hikes undertaken between Mar20 to May20, which had taken centre’s excise tax to record highs. Steps over the weekend will carry a salutary 0.2-0.3% (direct and indirect) impact in the near-term (petrol has 2.2% and diesel 0.2% weightage in the CPI basket) and is likely to reflect from June CPI onwards.

If states follow with tax cuts, cumulative impact will be bigger. Maharashtra, Odisha, Rajasthan, and Kerala also lowered their ad-valorem tax rates, as of last evening. As a counter, we also note that any price adjustments by oil marketing companies (to clear under-recoveries as retail fuel prices have not been fully adjusted to reflect global prices) and further climb in global oil, might negate part of the impact of these tax reductions.

India imposed an immediate ban (13 May) on wheat exports, triggered by a fall in production estimates as the standing crop was hurt by the ongoing heatwave, dubbed as early summer in states like Punjab, UP, Haryana.

According to the USDA, India was the eighth biggest exporter of wheat in the world, with shipments of 10mn tons in 20-21, compared to Russia (33mn) and EU (31mn). Ban in wheat exports boosted international prices at the margin, but a bigger role was played by geopolitical risks, and pockets of adverse weather as well as high energy prices. 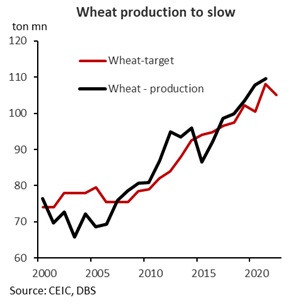 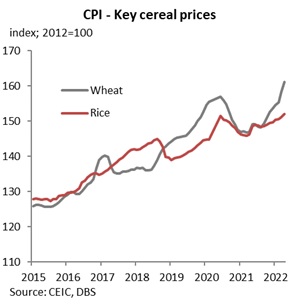 This ban is intended to calm domestic inflation (wheat has 2.56% weightage in the CPI basket) on higher local supply, although the salutary impact might be temporary. Wheat inflation has been rising on sequential and yoy terms for the past six months. Lower procurement of wheat supplies might increase demand for alternatives as rice, stoking cereal inflation. While this ban is indefinite, we note that India had imposed such a ban on wheat and non-basmati rice last in 2007 and 2008 respectively, to curb high domestic inflation and subsequently lifted it in 2011, but subject to pre-conditions.

Add to this, more measures are in the offing:

a) Sugar (1.13% weight in the CPI basket) exports will be added to the ‘restricted’ category from Jun22, and the ban will remain in place till Oct22. This move is intended to supplement domestic stocks and ensure price stability during the upcoming sugar season FY22 (Oct-Sep);

b) To combat a surge in prices of edible oil (refined oil i.e., sunflower, soyabean, saffola, etc. has a weight of 1.3% in the CPI basket) and disrupted palm oil availability, customs duty on imports of 2MMT each of crude soyabean oil & crude sunflower oil per year for two years has been lowered to 0%;

c) earlier in the year, import duty on lentils was cut to 0% for Australia and Canada, besides lowering duty on purchases from the US to 22% from 30% before. Cess on crude palm oil was also trimmed back in Feb22

These relief measures will partly offset the spillover of imported pressures and cap domestic prices, with a 10% drop in prices across few of these commodities to translate into a cumulative 0.5-0.6% impact on inflation. This lowers the scope of further upward adjustments to our FY23 inflation forecast of 6.4% yoy, as will watch developments closely. Persistent price pressures in essential segments for which demand is routinely inelastic i.e., food and fuel, could spur second round effects and entrench inflationary expectations.

The wedge likely reflects differing weight of sub-components in the inflation basket for instance, food has a higher weightage of 54% in the rural basket, but 36% for urban, while there is no housing component in the rural CPI. But the bigger reason for the divergence likely lies in the fuel component (7.9% weight in rural and 5.6% in urban) based on consumption patterns and the increasingly market-linked pricing of fossil fuels, kerosene and diesel, which offset routinely subdued price pressures in traditional fuel items like firewood and chips and dung cakes (RBI bulletin). While rising petrol/ diesel impinge on purchasing power in urban centres, electricity/ power tariff adjustments come with a considerable lag. 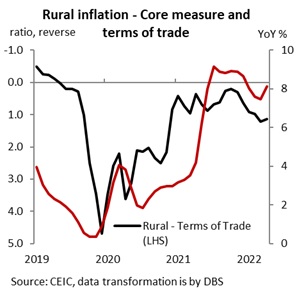 Agri input prices are also on the rise – by way of higher diesel, feedstock costs and fertilisers, paving the way for a higher minimum support price for upcoming crop seasons. High inflation has also had a dampening impact on real rural wage growth, with strength of upcoming southwest monsoon – spatial and geographical spread – under close watch.

Implications on the fiscal math

Few of these inflation relief measures carry fiscal costs. Recent developments point to an increase in spending demands, which is likely to narrow the revenue-side cushion.

Budgeted FY23 expenditure faces upside risks from additional subsidies i.e., higher food subsidy outlay on the food grain distribution scheme which stands extended till Sep23 (0.3% of GDP), and fertilizer to offset a sharp rise in farm input costs (0.4%). Under revenues, divestment run-rate is running at a weaker-than-budgeted pace i.e., assuming shortfall by a third (0.1% of GDP), lower RBI divided transfer (0.1%) and the weekend’s excise duty cuts (pro-rated for rest of FY23 at 0.3%). 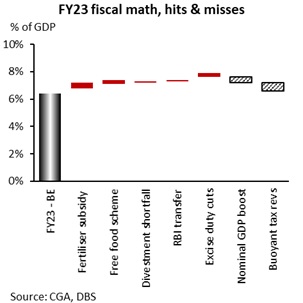 While these additional spending requirements add up to a little over 1.1% of GDP, there are few offsets: by way of a higher nominal GDP assumption (+0.3%) and likelihood of higher tax revenues/buoyancy (+0.5-0.6%). Netting off the two ends, budgeted math will still require reprioritization in existing spending heads. Press reports suggest that expenditure might rise by another INR1trn (0.4% of GDP) on higher subsidy, extension of free food scheme and need to offset rising agri input prices. We expect the FY23 target to rise to -6.6% of GDP vs budgeted -6.4%, but narrower than -6.9% in FY22. Gross borrowing program for the year at INR14.3trn is unlikely to increased, with INR8.45trn due to be raised by Sep22 (first half FY). Any shortfall, according to government sources cited by the press might be met by tapping into the Consolidated Fund.

These announcements are unlikely to materially derail the RBI’s hike path. As highlighted in Minutes from the RBI’s intermeeting hike in May, the first goalpost would be to take the current 4.4% benchmark repo rate back to the pre-pandemic level of 5.15% by a 50bp hike in June and followed by +25bp in August (our base case). Next, is to narrow the prevailing negative real rates to neutral vs the 12month forward-looking inflation. Hence, we see the repo rate heading to 5.65% by end-2022. 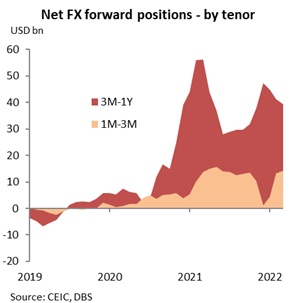 The rupee is hovering at the middle of the Asia ex Japan pack vs the dollar, supported by sizeable foreign reserves stock (despite the 8% drop from record high; partly influenced by base effects) and net long RBI’s forward FX book of $65.7bn (Mar22), with more than 90% under the 1Y maturity bucket.

In face of financial market volatility, the central bank’s inclination is to curb volatility in the FX movements but not fight the trend, especially if depreciation pressures stem from a stronger dollar and is impacting the AXJ block. To that extent, foreign reserves are being put to their intended use.

Authorities will play a balancing act, as the cash reserve ratio hike, intervention to support the INR and FX swaps, are intended to soak liquidity, which in turn opens the door for open market operations to contain yields, without jeopardising the inflation outlook. In other words, dollar sales to neutralize one-sided depreciation in the currency will also create the legroom for liquidity-neutral open market operations. With bond supply likely to remain high in FY23, need for open market operation is back to the fore, as the borrowings demand-supply mismatch is likely to keep yields buoyant towards 7.6%.