Photo credit: AFP Photo
Below is a summary; for the detailed and full report, please download the PDF
Asia’s monetary policy tightening tide is gathering pace amid a growth recovery from the pandemic, rising inflationary pressures, and a hawkish US Fed. The Bank of Thailand (BOT)’s policy stance, however, differs from others in Malaysia and Philippines, which have begun their rate normalisation cycles. The BOT remains a major central bank in the region that is dovish and primarily focused on supporting growth. The BOT has yet to signal its intent to normalise policy, but we see a rising risk for a hawkish shift. This report evaluates the BOT’s reaction function stacked against its monetary policy framework. We also consider the upside risks to our baseline view for BOT’s policy interest rate to remain unchanged at 0.50% through 2022 and early-2023. From an interest rates perspective, we assess if a hawkish BOT shift in 2H22 has been priced in and discuss strategy implications.

BOT’s reaction function estimation
We estimate an implicit monetary policy reaction function by identifying possible ‘Taylor rules’ that the BOT might consider in its interest rate decisions beginning from 2001.
In our initial estimation, we relate the BOT’s policy rate decisions at various meetings to the standard independent variables of the output gap and two separate inflation gap variations: 1) the deviation of headline inflation from the mid-point of the target band, and 2) the deviation of core inflation from the mid-point of the target band.
Our models, which cover two time periods (Jan-2001 to Dec-2017 and Jan-2001 to Dec-2019), estimate the output gap’s coefficients as almost zero, with the sensitivities to headline and core inflation high and positive overall, especially the latter. The two inflation variables are broadly statistically significant but unclear for the output gap. Out-of-sample predictions for the policy rate over the next two years (eight policy meetings each year) showed smaller forecast errors when using core inflation instead of headline inflation. Despite the shifting inflation target bands, the results affirm the BOT’s emphasis on core inflation.

We augment our initial model estimations with various US variables (Fed funds rate, 2-year and 10-year government bond yields). The US variables have positive coefficients and are statistically significant in influencing BOT’s decisions. Their coefficients are, however, smaller than that for core inflation deviations (which are little changed and robust from the initial modelling). Including the US variables improve the models’ fit and lower the out-of-sample forecast errors, on average over the two time periods. The coefficients for the output gap remain close to zero, consistent with the initial model but not significant for most estimates.
Hawkish scenario to BOT’s policy rate path

The BOT’s current growth priority when headline and core inflation is rising represents a departure from the empirical evidence shown by our estimated reaction function. We expect Thailand’s economy to continue recovering from the pandemic, helped by opening tailwinds (e.g., ongoing tourism revival). Still, darkening global economic headwinds have dampened recovery expectations relative to the start of 2022. The uncertainty has kept the BOT dovish, which informs our view of BOT staying on hold through 2022 and early-2023. 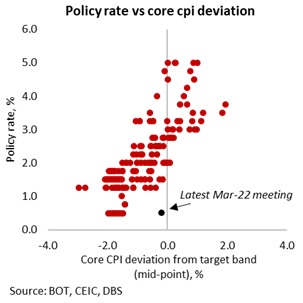 However, we see upside risk to BOT's dovish policy stance stemming from broadening price pressures as the negative output gap narrows, prompting policymakers to pivot towards policy normalisation and focus on price and financial stability. BOT's policy rate of 0.50% looks mechanically low relative to core inflation deviation. We will be watching for a shift in BOT’s rhetoric to hawkish from the current dovish stance as an important signpost to update our expectations for BOT’s policy normalisation schedule.

While THB OIS swaps are pricing for several rate hikes ahead, we think a hawkish BOT shift in 2H22 is far from being priced. By "hawkish shift," we mean specifically the scenario where BOT explicitly shifts its focus away from economic support and towards taming inflation or keeping up with global rate hikes (for financial stability reasons) and signals that rate hikes would be imminent in 2H22.

Comparing recent moves in 1Y, 2Y and 5Y OIS swaps, we note that the 1Y has been relatively more stable within a 0.8-1.0% range. In contrast, the March-early May rise in 2Y and 5Y has been much larger and fluctuations seem to mirror Fed hike pricing. The relative stability of the 1Y has undoubtedly been underpinned by BOT's unwavering growth focus which has anchored market expectations that BOT lift-off would be further-out and the pace of hikes would be more gradual. 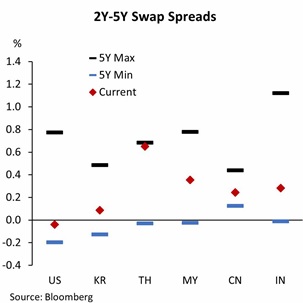 We also look at 1Y-5Y and 2Y-5Y swap curve spreads to assess the priced extent of front-loading of hikes - The tighter the spreads, the more front-loaded the priced hikes. We see that THB curve spreads are relatively wide compared to history. THB curve spreads are also wide compared to other regional markets, especially INR, MYR and PHP swaps, where the respective central banks have recently either pivoted hawkish or lifted rates earlier than expected. Based on the indicators above, we assess that a hawkish BOT shift in 2H22 is not yet fully-priced.
Our baseline policy rate forecast sees the BOT staying on hold in 2022 and lifting off only in 2Q of next year. Therefore, our strategy for 2H22 is to receive 1Y THB OIS at above 1.00% to extract carry and rolldown while the BOT keeps the policy rate at 0.50%. Closer to the end of 2H22, we could look to switch into 2Y-5Y OIS curve flatteners to position for a BOT that could sound less dovish to prepare markets for hikes in 2023. However, if a hawkish BOT pivot became our base case at any point in 2H22, we would immediately switch into 1Y-5Y OIS curve flatteners that should benefit most from the front-loading of hikes.