Photo credit: AFP Photo
Below is a summary; for the detailed and full report, please download the PDF

Philippines’ president-elect Ferdinand Marcos Jr (Bongbong) and vice-president-elect Sara Duterte will take office on June 30 in a six-year term, following their electoral victories in May. The new leadership will inherit an economy that is already recovering from the pandemic, but at a time when inflation is accelerating while the fiscal deficit and public debt are much higher compared to before the COVID-19 crisis.
Marcos has signalled that his administration’s first priority is the economy, and we expect some degree of policy continuity following the outgoing Duterte government. For example, Marcos is set to sustain Duterte’s flagship ‘Build, Build,Build’ infrastructure program, especially as Philippines’ infrastructure lags major ASEAN peers. On external relations, Marcos is likely to continue to pursue favourable ties with China, like Duterte, but also not neglect the US. Marcos’s appointments of experienced and technocratic candidates, who have worked in previous government administrations, into his economic team should provide steady and prudent hands to the economy over the coming years.
Fiscal policy: aiming for consolidation
Philippines’ fiscal agenda will come under Finance secretary designate and outgoing Bangko Sentral Ng Pilipinas (BSP) Governor Diokno, who has extensive previous experience in budgetary affairs. The incoming administration aims to lower the Philippines’ fiscal deficit to around 3% of GDP by the end of Marcos’s term in 2028 from a high of 8.6% in 2021. Keenly aware of the wide fiscal deficit and the jump in public debt following the pandemic crisis, the ~3% long-term goal would represent a return to below 2019’s deficit of 3.4% of GDP. 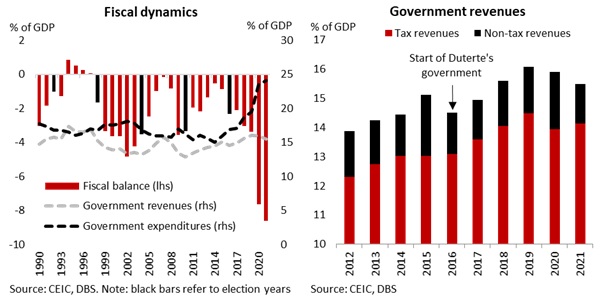 The new government will craft a first of its kind six-year medium-term fiscal plan, which covers a longer period than the usual three-year projections provided by the Development Budget Coordination Committee (DBCC). Comments in early June by Diokno signalled no plans to reduce government spending to address the high budget deficit. The government instead aims to focus on raising taxes and generating revenues, while growing the economy at more than 6-7% per annum over the coming years to narrow the fiscal deficit. It remains to be seen what revenue measures the new administration will propose that would fund various post-pandemic expenditures in areas such as infrastructure, climate adaptation, healthcare, education, etc.
Monetary policy: more hikes ahead
The BSP kicked off its monetary policy tightening cycle during its May meeting, and we expect further hikes under the new central bank leadership. We think back-to-back policy rate increase of 25bps is likely in June, with a decent possibility of a follow-up hike in August.
We see some certainty in the future path of BSP’s rate hikes, with incoming Governor Medalla sounding a similar hawkish tone as outgoing Governor Diokno. Medalla will serve out the rest of Diokno’s term that ends in July 2023. Medalla in a Bloomberg interview in early June said that ‘It’s almost a sure thing to everyone that we will raise in June,’ and ‘There is a ‘90% chance there’s another one in August.’ He said that increases beyond August will be data dependent. On June 17, Bloomberg reported that the BSP will likely proceed with a plan to increase its interest rate by 25bps on June 23, as mentioned by Medalla. 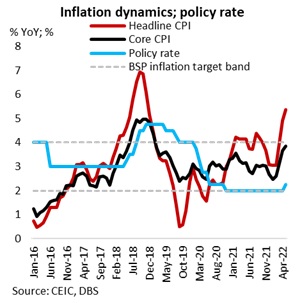 We reckon that further policy normalisation is likely, barring a significant economic slowdown, as policymakers are geared towards combatting above-target inflation. An economy that is recovering from the pandemic amid looser virus restrictions means that extreme pandemic-era accommodation is no longer needed. The BSP will be keen to temper rising inflation expectations to keep in line with its price stability mandate, and avoid falling behind the curve. In its May meeting, the BSP was already seeing spreading second-round effects, such as minimum wage hikes, from upside price pressures that have been driven by elevated global commodity prices, especially crude oil, driven by the Russia-Ukraine conflict.
Headline inflation soared to a three-year high of 5.4% YoY in May, surpassing the BSP 2-4% target band for the second straight month, and is likely to remain high for some more months. The benchmark reverse repurchase rate stood at 4% prior to the pandemic crisis. This suggests much room to normalise and tighten policy at a faster pace than the previously communicated gradual guidance if needed.