The BOT has pivoted hawkish during its June meeting amid rising inflation concerns. We are pulling forward our forecasts for the first BOT policy rate hike to 3Q22.
Group Research, Chua Han Teng22 Jun 2022

Photo credit: Unsplash Photo
Below is a summary; for the detailed and full report, please download the PDF

The Bank of Thailand (BOT)’s hawkish hold during its June meeting and communication that ‘a very accommodative monetary policy will be less needed going forward’ puts it on course to lift its policy rate in 2H22. This marks a significant shift from earlier expectations that Thai monetary policymakers would only normalise its loose policy in 2023. Upside inflation concerns and signs of an economic recovery that is gaining traction were key triggers for the hawkish pivot.

We are pulling forward our forecasts for the first BOT policy rate hike to 3Q22. With an urgency to tackle inflation, we expect the BOT to hike its policy rate from the record low of 0.5% in the August meeting (Thailand: Hawkish hold brings BOT closer to policy lift-off). While one of seven BOT’s rate setting panel said that there is no plan for an emergency meeting, an inter-meeting hike prior to August cannot be entirely ruled out: especially if June’s inflation surprise significantly again to the upside, and/or Thai baht weakness that is out of line with regional currencies driven by capital outflows concerns.

To avoid falling behind the curve on inflation, frontloaded back-to-back hikes appear likely. In a speech in June, BOT Governor Sethaput said that raising rates early will avoid future steeper hikes to combat inflation. The minutes to June’s meeting also mentioned greater future economic costs if policy normalisation is delayed. However, the BOT would be vigilant of not slamming the brakes on the growth recovery, and will seek a gradual approach. Returning to pre-pandemic 4Q19 policy rate of 1.25% as an initial milestone looks quite plausible by early-2023. 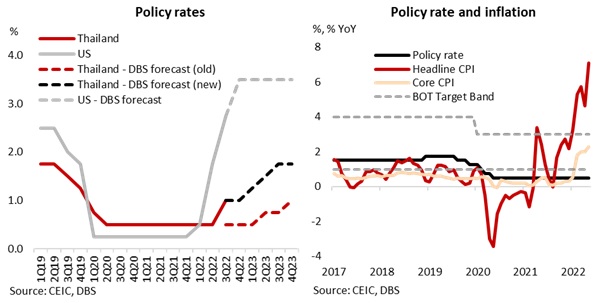 Inflation is emerging as a major concern for Thai monetary policymakers. Headline inflation has accelerated beyond the upper bound of the BOT’s 1-3% inflation target, has repeatedly surprised to the upside in 2022, while increases have broadened. The BOT raised its headline and core inflation forecasts for 2022 to 6.2% YoY and 2.2% YoY, respectively (from 4.9% and 2.0% previously) during the June meeting.

The Monetary Policy Committee (MPC) sees a significant increase in inflation risks, as reflected in the June policy statement and accompanying minutes. The risks come from uncertainties from global energy prices, possible broader and faster cost pass-through, and rising demand-pull pressures amid a recovering economy. 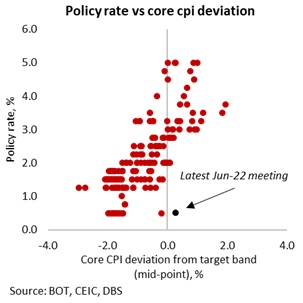 Our analysis in Thailand: Assessing rate hike risks showed that the BOT’s growth priority at a time of rising inflation represents a departure from its previous reaction function that emphasises core inflation. It is therefore a matter of time before the BOT becomes uncomfortable with accelerating inflation and start to prioritise price stability within its monetary policy framework beyond supporting sustainable economic growth. The BOT’s MPC also saw a need to build policy space and buffer to deal with potential future economic risks, beyond highlighting the shift in balance of risks towards rising inflation.

The BOT’s dovish stance in 1H22 was driven by a downshift in growth expectations and concerns of a sustained fragile recovery. In the June meeting, the BOT shifted hawkish, as it appeared to be comforted by 1Q22 upside growth surprise and pandemic-related growth drivers. This was despite still lingering global growth headwinds and challenges.

The world is learning to live with COVID-19 and Thailand is also transiting to an endemic status. The reversal of pandemic woes is a tailwind for Thailand’s economic recovery. We expect Thai real growth to pick up to 3.5% in 2022 vs 1.6% in 2021.

Thailand, however, has one of the highest household debt-to-GDP ratio in the region, standing at 90.1% as of end-2021. Do Thai households have the capacity to deal with an interest rate shock from interest rate hikes? The BOT’s September 2018 monetary policy report showed that higher interest rates were expected to have a limited impact on households’ monthly debt repayment. The BOT assessed that non-instalment loans (individual borrowers bear higher monthly burden, if interest rate rises) only account for 34.3% of total household debt as of 1Q18. The rest were fixed rate loans and instalment loans (borrowers pay a fixed monthly payment with a flexible repayment period). Assuming a stable share since 1Q18 and recovering household incomes, Thai households should be able to deal with interest rate increases and would not pose a significant constraint to the BOT’s tightening path.

In the June 2022 meeting, the MPC assessed that rising inflation would have a larger impact on households than interest rate increases, as mentioned by BOT MPC secretary Piti Disyatat (Bangkok Post). The MPC found that high inflation would increase overall household expenses by around THB850/month (3.6% of total monthly income), vs THB120/month (0.5%) from a policy rate hike of 100bps. This suggests that choosing to delay interest rate hikes would be less favourable for overall Thai consumer fundamentals, weakening purchasing power and might dent still subdued consumer sentiment further.
To read the full report, click here to Download the PDF.