Below is a summary; for the detailed and full report, please download the PDF

Halfway through the year, commodities face a tug-of-war – supply disruptions triggered by geopolitical tensions and reopening boost to demand stoking prices, whilst concerns over an impending growth slowdown due to policy normalisation and quantitative tightening check optimism.

Global food prices joined energy in registering sharp gains this year. For instance, the IMF commodity indices for food & beverages, as well as non-fuel indices, have risen sharply this year, to record levels. The UN Food and Agriculture Organization (UN FAO) food index touched a record high in April and levelled off in May but was still up by 26% yoy on average in the two months. While the lift is broad-based amongst sub-segments, vegetable oil led by a wide margin, followed by cereals.

High food and fuel prices mark a double whammy for households as consumers tend to spend a higher proportion of their incomes on basic necessities. The weight of food in the ASEAN-6 consumer price inflation basket is significant at 20-40%, which together with fuel, accounts for at least 50-60% of the basket.

In this note, we assess three aspects:

High food prices pose a crucial policy challenge for policymakers, as supply-side inflation in basic necessities such as food and fuel tends to alter inflation perception, i.e., the longer it lasts, the higher the potential second-order impact and spillover onto wage growth. Our momentum gauge i.e., 3m/3m saar % for the region’s food inflation is rising (see chart). 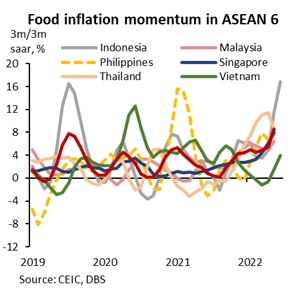 The latest bout of increase in food prices is driven by: i) supply distortions due to geopolitical tensions and inclement weather /and restrictive trade policies by major exporting countries; ii) pass-through of higher energy prices, feeding into transportation and food costs.

Under i) amidst inflationary concerns globally and food security assuming priority, several countries have taken restrictive measures to ensure sufficient domestic stockpiles to help contain prices and lower hardship amongst the populace.

Globally, since the Ukraine crisis, about 16.9% of the share of global trade (by calories) had faced some extent of food export restrictions, more than the post-first wave of Covid as well as the 2007-08 crisis. In the latest update, the share stands at 12.5%. Since Mar-20, about 18 countries have imposed an actual ban, whilst seven have imposed export licensing (see chart in PDF), according to data from International Food Policy Research Institute.

This includes a ban on wheat exports by India, a temporary ban by Indonesia on palm oil (lifted since then), Malaysia (chicken, partly eased), etc. Additionally, Russia and Ukraine are crucial suppliers of wheat, corn, fertiliser, and feedstock, supplies of which have been disrupted due to the ongoing military conflict. The vulnerability of the food production structure is high as it is relatively less diversified and more concentrated, especially in commonly used staple varieties, which was reinforced by the fallout of the Russia-Ukraine military conflict.

On ii) high oil prices are also likely to have a pass-through impact on food segments. The correlation of changes in Brent prices (yoy) to the UN FAO food index (yoy) in the past decade is significant at 0.77. Brent prices were up by more than 50% in 2021, followed by another 48% jump in 2022 year-to-date (ytd), which is likely to have fed through to higher production costs for agriculturists, transportation (affecting wholesale/ retail prices), and other relevant industries including petrochemicals, etc. Concurrently, prices of fertilisers, which make about a sixth of agricultural costs, too have translated into higher input costs.

The UN FAO food index touched a record high this year, up by an average of 25% yoy ytd. Other indicators from the UN, IMF, and World Bank tracking global food price trends have registered similar steep increases.

While these portend pipeline inflationary risks, our calculations show that the correlation between international food price indices (yoy) and ASEAN-6 food inflation (yoy) (on a contemporaneous basis, using monthly data from 2017 to May-22) is surprisingly weak, suggesting the transmission mechanism is not one on one, on to regional inflation.  A working paper by UN FAO highlighted key domestic forces that can mitigate or aggravate the spillover impact of moves in the global food commodities. Key amongst which were:

In all, whilst a rally in global food commodity price indices is a source of worry, the pass-through to final domestic prices is asymmetric depending on the countries’ dependency on imports as well as the extent of price controls domestically.

In this regard, Singapore and the Philippines are likely to be impacted the most by movements in global food indices, whilst Thailand, Indonesia, and Malaysia are less impacted.

Headline vs core inflation dynamics – via a regression study

We assess the dynamics of headline vis-à-vis core inflation across the ASEAN-6 economies that would be relevant for monetary policy decisions. Specifically, we carry out regressions to analyse if

- headline inflation in the ASEAN-6 countries, historically, reverted to the core gauge or
- core returned to the headline (see Appendix: Methodology at the end of the PDF for details and charts).

The results seek to shed light on whether shocks beyond that measured in core had resulted in signs of persistency in headline inflation and/or broadening to core inflation, from a statistical perspective. This could provide a good barometer to policymakers on whether to pre-empt with policy tightening measures or bide time.

Based on our regression analysis using two time periods (Jan-16 to May-21 and Jan-16 to May-22 to include price developments over the past year), we make the following observations:

In the PDF, we discuss each of the ASEAN-6 countries.