We have not seen peak Asia inflation yet. It is unclear if we have seen peak Fed hawkishness.
Group Research, Duncan Tan, Eugene Leow12 Jul 2022

Recent outsized declines in Asia swap rates and yields have sparked speculation that Asia rates have peaked and a correction in hike overpricing is already underway.

In the early stages of Asia hike cycles, Asia swaps (OIS/IRS) tend to overprice on the pace and quantum of expected rate hikes. And at some time later in the cycle, there will come a "turn" when markets realize that the cycle is approaching an end, and the overpricing in swaps will start to correct towards fairer levels. In our view, we don't think that we have reached such a "turn" yet, and see the bias is still for Asia swaps add back hike pricing in 3Q.

One, it is not clear if we have seen peak Fed hawkishness. There has been some recent softness in US-related economic indicators, and on the back of that, we could see the Fed slightly tone down its hawkish stance. But we think it’s too early to judge that the Fed will soon shift its focus from inflation risks to growth concerns.

Two, we have not seen peak Asia inflation yet. So far in July, we have gotten June inflation prints for Indonesia, Thailand, South Korea, the Philippines and China. The read-across is that Asia inflation prints are still rising and surprising to the upside (relative to the survey). Asia central banks' inflation estimates/projections also suggest that YoY prints are expected to continue to rise, and a peak is still in front of us.

We proxy market pricing of peak policy rates via 1y forward swap-implied rates and compare them against our economist forecast. In mid-June, we saw that Asia swaps were grossly overpriced by more than 100bps of additional hikes. Since then, market fears around growth and recession risks and the possible implications for global hike paths have seen overpricing come down significantly. We think the current swap pricings are much closer to fair. The current low level of overpricing (relative to mid-June) and our belief that rates are biased higher ahead mean that current swap rates present better entry points to selectively initiate payers. 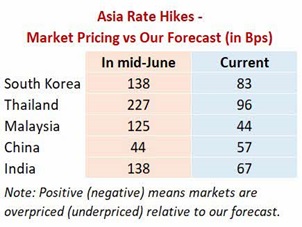 Accordingly, we hold a pay on further dips stance in KRW, THB and INR swaps. Compared to regional peers, we think that the respective central banks of those markets would show relatively more resolve regarding their focus on fighting inflation risks.

We think the risks ahead around Asia inflation and actual hike paths are likely balanced. Asia central banks could get more concerned about the increased passthrough from FX depreciation to domestic inflation, and hence quicken their hike pace. On the other hand, the recent pullback in oil and commodity prices could lessen worries around the persistence of inflation and allow some relief of hike pressures.

For our running Asia rates ideas, we 1) pay 5y CNY NDIRS and 2) receive 5y INR NDOIS ideas initiated in early June. Both ideas are currently in the money. For the pay 5y CNY NDIRS idea, we decide to tighten the take-profit level from 2.95% to 2.85%.  The rebound in CNY rates could be smaller than we had expected, as China's growth recovery seems to be more gradual and lockdown risks still linger in the near term. For the receive 5y INR NDOIS idea, we keep the take-profit level at 6.65% and could look to flip to pay if the profit-taking level is hit.

The Bank of Korea (BOK) is one of the more hawkish central banks in the region, communicating its urgency and commitment to tackle inflation. Headline CPI printed 6.0% YoY in June, the highest in more than 20 years. BOK survey also shows that 12m forward inflation expectations amongst South Koreans hit 3.9% in June, the highest reading in almost 10 years. The inflation challenge is also compounded by the won's faster depreciation pace (most in Asia over the last 12 months) which could mean relatively larger pass-throughs to import prices and CPI.

Our economist is forecasting back-to-back BOK hikes at the July and August meeting. The BOK's larger inflation challenge has also led to some market expectations of more aggressive 50bps hikes. Looking at onshore FRAs, markets have priced in a 50bps hike for July and 25bps hike for August meetings. For October and November meetings, FRAs are pricing for 35-70% chances of 25bps hikes per meeting. Compared to mid-June, markets' hike pricing has decreased considerably, by around 50bps. We think the pullback in hike pricing presents better entry levels to reload swap payers, as the risks to inflation and BOK's hike path remains firmly tilted to the upside. 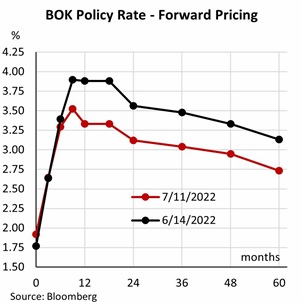 Our idea is centred on the view that the convergence of 1m/3m Hibor to Libor will occur at a slower pace than what is currently priced by markets. At present, 3m Hibor (1.71%) is around 70bps below 3m Libor (2.42%). FX forwards and IRS markets are pricing for 3m Hibor to catch up to 3m Libor around 9-10 months from now (i.e., April/May 2023). We think that the convergence process taking longer and so express via a receive 2y HKD vs pay 2y USD IRS idea. In addition, the idea enjoys significant positive carry/roll (17bps over 3 months).

We don't doubt that as the Fed continues to hike rates in the coming months, the bias is for the 1m/3m Libor-Hibor spread to stay wide and encourage buy USD vs sell HKD carry trades. That would expectedly lead to the weak side convertibility undertaking (CU) of 7.85 to be triggered from time to time, causing HKMA to buy HKD and thereby draining interbank liquidity. However, we think that there are offset factors that could see the weak side CU being triggered at a lower-than-expected frequency and the Aggregate Balance could stay large (>HKD100bn) for longer-than-expected. Specifically, the improvement in China's growth outlook (relative to the rest of the world) could be a key source of support for Hong Kong equities (Hang Seng Index has been outperforming global indices) and draw in stronger equity inflows. The associated USD supply could help to keep USDHKD away from 7.85, or at least not let the weak side CU be triggered frequently. 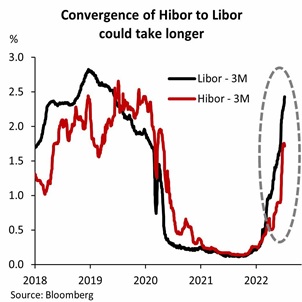