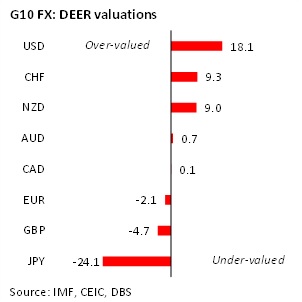 Within major G10 currencies, the JPY, GBP, and EUR are the most undervalued based on latest DEER valuations.  The JPY’s undervaluation is still highly stretched, though it has started to revert strongly since late July, after 7 consecutive months of deterioration. GBP under-valuation has also deepened. The EUR has displaced the CAD as the third cheapest currency, though valuation difference between the two is quite small. While EUR/USD is close to parity and near a multi-year low, the EUR’s DEER under-valuation is much more modest.

The USD, CHF, and NZD are the three most over-valued currencies based on the DEER. The USD has climbed further since our last update, but it has recently softened alongside easing US yields. The CHF has overtaken the NZD in valuation since June, while NZD has seen little change in its valuation compared to our previous update.

Our DEER strategy still recommends being long in JPY, GBP, and CAD.  Relative valuations have not changed meaningfully to trigger recommendation changes, given that under-valued currencies have stayed under-valued and vice-versa. But market positioning has moved to extremes, especially in the JPY. This can be glimpsed by the large volatility in USD/JPY, which has bounced from 130 to 140, and came back towards 130 in just two months. Risks of a recession and a consequent decline in yields may well result in a sharp unwind and strengthening in the JPY.

On the other side, the DEER strategy recommends being short USD, CHF, and the EUR. The USD’s over-valuation is looking harder to sustain as US yields retreat from recent highs, while growth risks are coming to the fore after two consecutive quarters of economic contraction. The CHF is back to markedly over-valued levels, and downside risks from a possible EU recession could lead to less tolerance for CHF strength. The EUR is still a short given its large negative carry relative to other currencies, while its valuation is not sufficient to provide an offset. 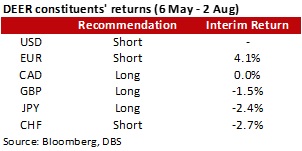 Volatility of the DEER basket continues to be strongly driven by USD swings. The DEER was initially pressured by the USD surging to record highs, but it has rebounded since mid-July as the USD eased. The softer USD may be attributed to lesser concern over inflation and its accompanying market volatility. US activity is clearly slowing, and the prices of global commodities have also eased. As such, the FOMC has also placed a greater emphasis on activity in its July policy statement, opening room for smaller-sized rate hikes. Market expectations for outsized Fed policy tightening are now being tempered.

Diving into individual crosses, we note that our two shorts against the USD showed a rare divergent performance, with the EUR short posting a 4.1% gain and the CHF short posting a 2.7% loss. The outperformance of the CHF is due to a surprise 50bps rate hike by SNB in June, which was further bolstered by the Bank dropping its longstanding description of the CHF as highly valued. Nevertheless, the subsequent gain in CHF may be too strong for a stable real exchange rate desired by the SNB.

While the ECB had also surprised its own 50bps rate hike in July, EUR sentiment has been dragged by significant downside risks from rising gas and energy prices, as well as new political uncertainty in Italy.

The CAD position ended up flat. The CAD has largely managed to keep pace with USD strength. The BoC not only matched the Fed’s rate hikes, but it has even surprised with a 100bps rate hike in July. Further BoC tightening is likely as the Canadian labour market is tight, while growth is also expected to remain strong in Q2, unlike the contraction seen in the US.

GBP has been weighed by political uncertainty after the Conservative PM was forced to relinquish his position, while UK inflation has also surged to a 40-year high of 9.4% (y/y) for June. The resultant squeeze on the cost of living is a worry, but the BOE is likely to continue hiking rates to tackle inflation amid a still tight labour market, providing support for the weak GBP.

The JPY remains highly volatile, with our JPY long posting a 2.4% loss. Since topping out close to 140, USD/JPY appears to have lost upside momentum. Thus, the period of overt JPY weakness could be behind us if US yields are no longer climbing, amid rising risks of a US recession.  On the trade front, a recovery in Japanese auto production is now expected, after Q2 production was adversely affected by supply chain shocks from the Shanghai lockdown and a global chips shortage. The consequent rebound in auto exports may help support the JPY, alongside a gradual reopening to tourist arrivals.

On an aggregated basis, our DEER strategy posted a small loss of 0.8% from 6 May to 2 August.

The DEER strategy has now successfully reached its one-year milestone since its inception on 3 August 2021. The journey has been extraordinary. The DEER strategy experienced stresses that were beyond what were seen in its back testing during formulation. This includes global stagflation risks not seen since the 1980s, a European conflict with unprecedented sanctions on a major economy, persistent shocks to supply chains, and intermittent lockdowns in the world’s second largest economy. Despite these major stresses, we are reassured by the fact that the DEER Strategy faces relatively limited downside, and even outperformed traditional risk assets. 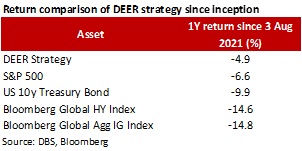 The DEER Strategy’s daily returns have also continued to show limited correlation against returns of both the S&P 500 and the Bloomberg Global Aggregate Bond Index. This indicates that it may offer a valuable diversification benefit to traditional portfolios consisting of just equities and bonds. 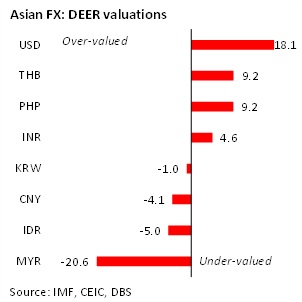 For Asian ex-Japan currencies, our DEER currency rankings have remained stable. MYR, IDR, and CNY are still the three most under-valued in AXJ. We note that the MYR now sits at a record low valuation, being over 20% cheaper than its DEER fair value. An under-valued currency has unsurprisingly bolstered Malaysia’s 12M trade surplus to a record high of over USD60bn, which is double of its pre-Covid norms of around USD30bn. If there is greater political stability, we may see an increase in exchange conversion of export proceeds that could spur a MYR recovery.

For IDR, unfavourable real rates given a pick-up in inflation may have driven some foreign outflows, resulting in depreciation pressure. Nevertheless, BI is laying the ground for policy tightening to begin soon, with the first rate hike likely to come in September.

The CNY is weighed by growth concerns from intermittent lockdown risks, on top of emerging risks related to mortgage strikes by home buyers worried about project delivery risks. If developer distress persists, this could chill home buyer sentiment and depress property sales, offsetting any growth support from expected stimulus.

PHP, THB, and INR are still over-valued compared to Asian peers, though valuations are not as striking relative to the USD. PHP’s over-valuation has narrowed fast, as the Philippines now see a rapidly expanding trade deficit amid buoyant import demand. Remittance growth has also not been sufficient to narrow the current account deficit. Notwithstanding PHP depreciation, the growth outlook should remain supported by continued reforms, with newly elected President Marcos appointing experienced technocrats to his Cabinet.

THB’s over-valuation has also compressed since May, but further THB weakness cannot be discounted amid a wider current account deficit. A surge in tourist arrivals since May 2022 suggest that tourism receipts could be on the cusp of a sustained recovery, though a full recovery to pre-Covid levels is uncertain.

INR is still modestly over-valued, even after USD/INR has risen towards the 80 psychological level. India’s trade deficit has been pressured by rising oil prices, and a period of stable oil prices is needed to provide relief on the currency front. Foreign inflows have also dwindled amid rate hike concerns, with inflation now showing signs of acceleration.

GlobalEconomics & Strategy
Disclaimer and Important Notice
The information published by DBS Bank Ltd (“DBS”) is for information only. It is based on information or opinions obtained from sources believed to be reliable and to the maximum extent permitted by law, DBS does not make any representation or warranty (express or implied) as to its accuracy, completeness, timeliness or correctness for any particular purpose. Opinions and estimates are subject to change without notice. Any past performance, projection, forecast or simulation of results is not necessarily indicative of the future or likely performance of any investment or securities. The information published is not and does not constitute or form part of any offer, recommendation, invitation or solicitation to subscribe to or to enter into any transaction; nor is it calculated to invite, nor does it permit the making of offers to the public to subscribe to or enter into any transaction, and should not be viewed as such. DBS, its related companies and affiliates (“DBS Group”) and its respective directors, officers and/or employees may have positions or other interests in, and may effect transactions in securities mentioned and may also perform or seek to perform broking, investment banking and other banking or financial services to any persons or entities mentioned. To the maximum extent permitted by law, DBS Group accepts no liability for any losses or damages (including direct, special, indirect, consequential, incidental or loss of profits) of any kind arising from or in connection with any reliance and/or use of the information (including any error, omission or misstatement, negligent or otherwise) or further communication, even if DBS Group has been advised of the possibility thereof. The information is not intended for distribution to, or use by, any person or entity in any jurisdiction or country where such distribution or use would be contrary to law or regulation.