Photo credit: Unsplash
Thailand is undergoing a shift in its external accounts. Following years of consistent current account surpluses, Thailand’s surplus has flipped into a deficit starting from late-2020. This marks the first string of current account deficits since the middle of 2013 during the taper tantrum when currencies with fragile fundamentals saw significant depreciation. The worsening external dynamics are already being reflected in a weaker Thai baht – the weakest currency in Asia this year. With the Fed beginning to discuss asset purchase tapering and eventually policy normalisation, Thailand’s need for external financing is coming at a potentially challenging period. The Thai baht is therefore vulnerable to any surprise in the Fed’s hawkish tilt, in our view. We are expecting more THB depreciation to 35-36 per USD by 1Q22 (see ‘Thailand: Sluggish growth, lower rates, weaker THB for detailed forecasts).

The Thai authorities are making efforts to restart foreign tourism, but progress has been muted as the pandemic offers surprises from virus mutations, particularly from the more contagious Delta variant. Since the launch of the ‘Phuket sandbox’ in July, visitor arrivals into Thailand have ticked higher. However, monthly visitor arrivals of just 18k in July were still a far cry from ~4mn pre-pandemic.

The Bank of Thailand (BOT) is forecasting 0.15mn foreign tourists for 2021 and 6mn in 2022, which has been dialled lower several times over the course of 2021. The International Air Transport Association (IATA) is expecting global air travel to recover to 88% of pre-pandemic levels in 2022 and to return to above pre-virus numbers by end-2023. There is a path to tourism recovery from reopening plans as vaccinations are rolled out, but only if the virus does not spring new surprises again. 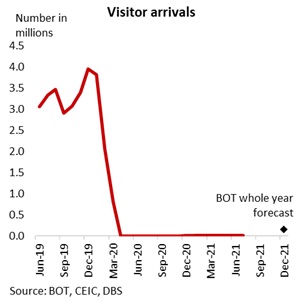 Thailand’s worsening current account dynamics is however coming at a time when financial flows are not forthcoming. This has therefore driven the overall balance of payments (BOP) into negative territory. 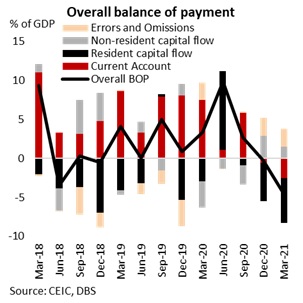 Resident capital outflows have driven Thailand’s weakening financial account over the past couple of quarters, except in 2Q20. Net outflows were mainly portfolio-related. Indeed, residents made record amounts of outward portfolio investment, particularly in equities, running at around 8% of GDP in 1Q21. High frequency flow indicators from foreign investment funds offered by Thai financial institutions also showed that equity outflows have persisted going into 3Q21. Thailand also saw resident equity outflows in 2013, but nothing to the scale seen in 1Q21. The BOT is monitoring equity outflows, but is not worried. The central bank instead highlighted the success of measures introduced in late-2020 to encourage capital outflows in foreign securities investment (Reuters; BOT release). Better performance in global equities vis a vis local stocks could have also induced outward equity investments due to the fear of missing out. Thailand meanwhile has attracted foreign debt portfolio inflows, which were also noted by the BOT, but so far insufficient to offset the large resident equity outflows. 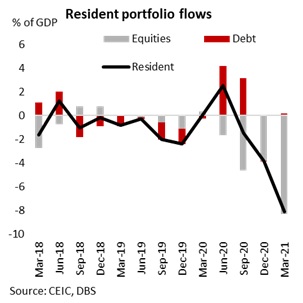 A key support of Thailand’s financial account has been ‘Other Investments’. There appeared to have been a repatriation of offshore currency and deposits over the course of the pandemic, possibly to supplement domestic income losses. Direct investments based on BOP data were positive in 1Q21, following a period of net outflows. The positive numbers might have continued in 2Q, given robust investment application growth of 158% YoY for 1H21, based on Board of Investment figures. 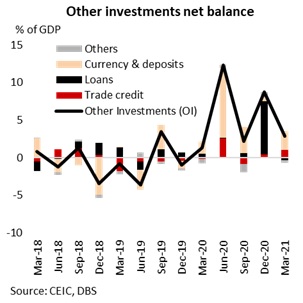 BOT has intervened in FX markets

The Thai baht has weakened by approximately -8% year-to-date (ytd), and the BOT has intervened in the currency markets this year. The central bank’s reserves (based on BOP data) have dropped by around USD8.8bn so far in 2021 as of July, according to our estimates. In contrast, during the taper tantrum year of 2013, BOT’s reserves declined by approximately USD5bn for the entire year, when the THB depreciated by -5.4%. 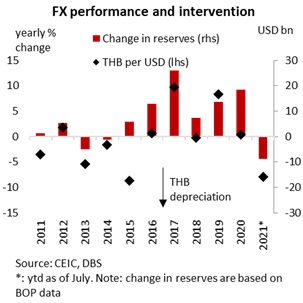 The THB’s depreciation this year however does not appear to be alarming for the authorities. The BOT said in its minutes of its August monetary policy meeting that the baht has depreciated against the USD more than regional currencies due to domestic factors - intensified COVID-19 outbreak situation and the outlook of slow Thailand economic recovery. The central bank also added that the currency depreciation did not hinder the economic recovery. Moreover, the BOT was previously concerned about baht strength, for example in 2019 and in late-2020.

We believe that the Thai baht should be buffered by the BOT’s high reserve adequacy. The BOT has accumulated net reserves close to the highs seen in mid-2011. They stood at ~USD280bn (54% of GDP) as of mid-June. Our estimates show that Thailand fares well on traditional reserve adequacy metrics and the IMF’s ARA framework. Thailand’s import cover has improved over the years, standing at 14x, compared with around 8.4x in 2013. Net reserves-to-short-term external debt came in at around 386% versus around 331% in 2013. The IMF ARA metric is well above the recommended 100 to 150% at around 280%, improving from approximately 250% in 2013. We have previously estimated a model of long-term currency fair values, or DEER fair values, based on the economic fundamentals of Purchasing Power Parity, Balassa-Samuelson, and Terms of Trade (see DBS Focus: Currency fair values: What’s cheap and what’s DEER?, 8 Jan 2020). Our DEER model shows that the THB is trading around 6.3% higher than its fair value, which typically implies depreciation pressures over the long term. Moreover, an over-valued THB also implies that the currency now poses a drag on Thailand’s current account. This is far from ideal given Thailand’s current economic situation, as previous services contributions from tourism have already contracted severely due to the pandemic. 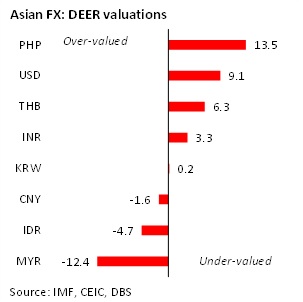 We believe the BoT could refrain from leaning against further depreciation, as a softer THB helps to support Thailand’s trade balance, cushioning the impact from disruptions to the tourism and hospitality industries. In line with this, our forecast now expects further THB depreciation to 35-36 per USD by 1Q22. Asian real money investors can consider positioning based on our relative Asian DEER valuations, which favours MYR and IDR against the THB.