Photo credit: AFP Photo
Several Asian government bond markets are expected to see sizable step-ups in issuances in 4Q. Increase in bond supply could bring some curve steepening and bond-swap widening pressures, especially in markets where bond demand may not sufficiently rise to smoothly absorb the larger supply. The global backdrop of ongoing policy normalization in DM and bear-steepening trend in core rates would also be unhelpful - Asian bond investors could become more cautious on duration.

Public Debt Management Office (PDMO)'s financing plans for FY22 (October 2021 - September 2022) indicate significantly larger Loan Bond (ThaiGB) issuances relative to prior years. Gross ThaiGB issuances are projected to amount to THB1100-1300bn in FY22, which would represent a 45% increase over FY21 (THB827bn) and 110% increase over FY20 (TH571bn). In the coming October-December quarter, gross issuances are planned to rise to THB273bn, from THB231bn in the prior July-September quarter. 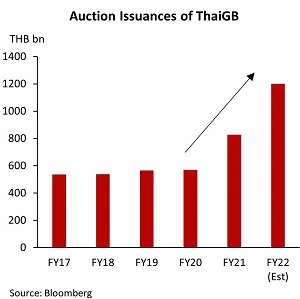 The planned step-up in ThaiGB issuances largely reflects a normalization of financing strategy. Pre-pandemic, PDMO typically does the bulk of its financing via government bonds. However, during the pandemic, PDMO has relied heavily on shorter-term instruments such as Treasury Bills (TB), Promissory Notes (PN) and Term Loans (TL), to not overly burden the market with large duration supplies. Normalizing its financing strategy now could be because the capacity of PN and TL financing channels are getting limited and there could also be some desire to avoid accumulating too much roll-over risks from focusing on shorter-term instruments. Raising the share of long-term financing (ThaiGB issuance) could also be in anticipation of an increase in the debt limit to 70% of GDP. 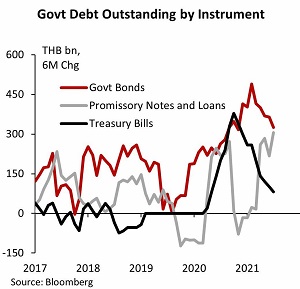 We think BOT could allow the ~THB2.95tn outstanding stock of BOT Bills/Bonds to decline further, to provide incremental liquidity to help with the absorption of larger ThaiGB supply. This will provide some anchor for short-term bond yields up to ~5Y, but support for longer-tenor yields will likely be limited. Recently, BOT has also been buying ThaiGBs on a monthly basis, though sizes are probably not sufficiently large to cap long-term bond yields. In 4Q, we expect ThaiGB to underperform regional bonds, and the yield curve should steepen.

Progress of central (CGB) and local government (LGB) bond issuances have been slow through July, and only started to pick up from August onwards. Due to the backloading, we are projecting net CGB and LGB issuances to average CNY850-900bn per month in 4Q, significantly higher than the CNY390bn monthly average in January-July. The large duration supply in 4Q will exert disproportionately greater upward pressures on long-term rates. On the other hand, we think short-term rates will be better anchored, due to PBOC staying supportive on liquidity to boost market sentiments and pre-empt liquidity shortfalls. We see good potential for CNY rates curves to steepen and express via a Pay 5Y vs Receive 1Y CNY NDIRS idea (entry 0.215%, stop-loss 0.100%, take-profit 0.400%). 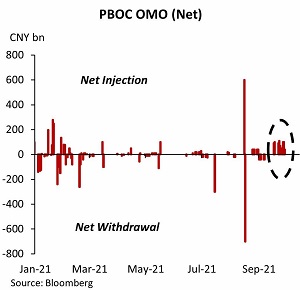 The statutory debt limit is expected to be raised to 65% of GDP from 60%, primarily to fund an increase in ceiling cap for COVID-19 Fund to MYR110bn from MYR65bn. As of September, MYR60bn of the approved MYR65bn size had already been spent and total payment commitments had reached MYR91.8bn. This could suggest that the bulk of the proposed MYR45bn increase in Fund size may be financed in 4Q. If that materializes, net issuances of MGS/MGII could jump from MYR6-7bn monthly average in 1Q-3Q to ~MYR8-9bn in 4Q.

Compared to THB and CNY rates, we are more sanguine on curve-steepening pressures on MYR rates. We expect the larger MGS/MGII supply in 4Q to be smoothly absorbed by the investor base. MGS/MGII's FX-hedged/USD ASW yields have been quite attractive in recent quarters, which should continue to underpin the stable inflows from foreign investors (~USD1.0-1.5bn per month). Banks' bond demand is also expected to be strong so long as lending growth (to private sector) stays slow. 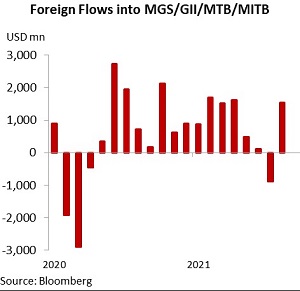 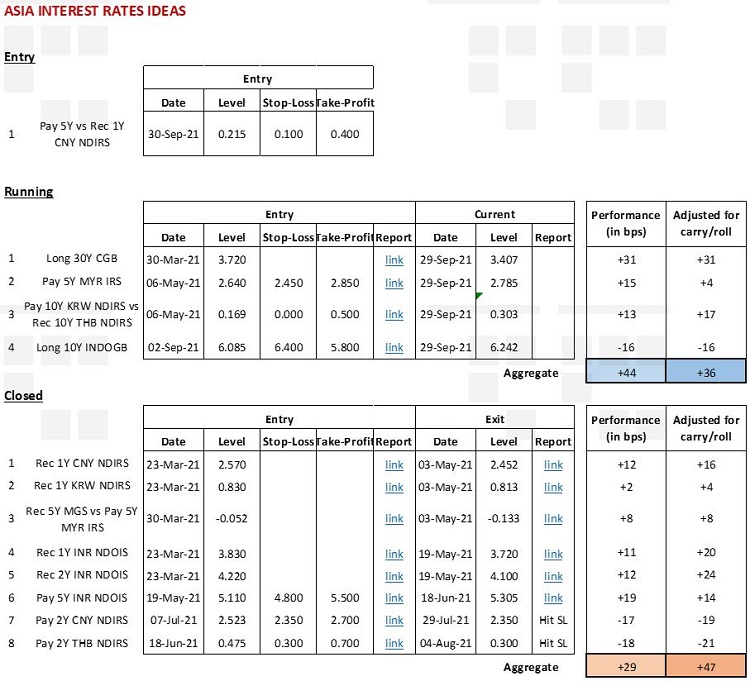