Optimism over inclusion of India’s government bonds in global indices has resurfaced. Expectations are that the ongoing review might result in JP Morgan including Indian securities in its GBI-EM fixed income basket. These hopes have led the rupee and INR bonds to diverge from global rates since August (barring the hit to risk sentiments following a strong US inflation report). As a result, rupee trimmed losses vs the US$ to -0.72% in 3Q22 quarter-to-date (vs -6.7% fall in Korean won, -3.9% in Philippine peso and -4.4% in Taiwan dollar). Bonds benefited initially from a pullback in commodity prices and rise in USTs but diverged thereafter by strengthening in the face of the sell-off in global rates. INR 10Y bond yields are down 24bp from end-Jul and -50bp vs Jun high. Apart from banks’ stepping up bond purchases, insurance companies and foreign investors (front running index hopes) have been other sources of demand this fiscal year.

In Oct21 when India was last put on review, aspects like market access, trading and settlement were seen as potential hurdles, besides global clearing platform Euroclear also viewed as a necessary pre-condition for inclusion. A final say on these aspects and taxation details was expected to be outlined in the Feb22 Union Budget, but no clarity was provided, which dampened hopes of an imminent inclusion.

Two catalysts have revived optimism. Firstly, reports[1] suggested that JPMorgan had reached out to global investors/ fund managers this summer on adding India to its GBI-EM Global Diversified index of local currency debt. Presumably, the index provider’s stance on the Euroclear settlement platform and taxation concessions have softened. That said, Euroclear is still a possibility over the coming months. INR bonds are yet to be included in other indices such as Bloomberg Barclays and FTSE Russel’s EM bond index.

Secondly, an ongoing reweighting exercise in the EM index opens the door for inclusion. After placing Russia on index watch in Mar22, JPM excluded the country’s debt from all of marketable indices by late-Mar22. Russia’s exit (8% weightage) has, by default, increased the weightage of other emerging market economies, resulting in a concentrated and less diversified benchmark. Other Asian countries in the mix include China, Thailand, Indonesia, and Malaysia. Considering the depth of India’s market, size of outstanding bonds (more than $1trn by Jul22) and special carve out of eligible securities which are free of access caps, makes these an attractive proportion. The GBI-EM[2] index includes regularly traded, fixed-rate, domestic currency government bonds which international investors can readily access and without capital controls but does not factor in regulatory/tax hurdles.

Ears to the ground and potential impact

Securities available under the Fully Accessible Route (FAR) channel, which is a carve out of government securities fully open to the foreign investors (free of limits), continues to grow and might be included in the indices, for a start. As of September, about 22 securities are available under this channel, with the tenor of eligible FAR securities spanning from 2Y (2024) to 30Y (2052), with a total outstanding value of US$287bn. The number of securities has risen from 8 in mid-2020, with an outstanding value of US$86.4bn. 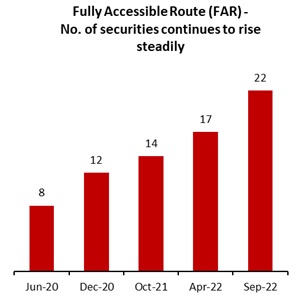 With this inclusion, India’s debt market will effectively open up further, allowing investors to increase their allocations, beyond the less than 2% they own at present. This inclusion is expected to attract less volatile and more passive investment flows, compared to the off-benchmark flows at present. Every 1% weightage can potentially draw in inflows worth USD2-3bn under the JPM GBI-EM. AUM of c$300bn suggests an eventual 10% weightage in the JPM index could draw $25-30bn after the inclusion is complete. In this respect, there is considerable lead time in the process, between the announcement of intention until the actual inclusion, of typically 10-12months at the least, suggesting any announcement in late-Sep will see the process be completed in Sep-Oct23. This includes time needed for investors to meet KYC norms and clearing/ settlement requirements, which are still viewed as time consuming. For instance, China’s local currency debt underwent a 10-month process, starting February 2020, to eventually rise to a 10% weightage in the GBI-EM index.

There is a broad acknowledgement that an index inclusion carries strengths of diversification in the investor pool as well as introduction of more sticky foreign inflows. Nonetheless, wariness over distorting the level-playing field between domestic and foreign investors, has seen authorities maintain that notable change in the taxation regime – capital gains and withholding taxes on investments into debt securities – is unlikely. At the same time, the intention to allow provide INR securities on the clearing platform, Euroclear is seen as a sufficient but not necessary pre-requisite for inclusion, mirroring the stance that China and Indonesia have taken.

Confirmation of the index news will fuel short-term gains in the rupee and bond yields. Beyond that buoyancy, the prospect that bulk of the benefits will accrue in FY24, and some part of the flows already front running the news, further currency strength is likely to be kept in check. Past instances have seen the central bank mop up dollar flows in the event of strong foreign interests, to bolster their defences via accretion to the foreign reserves. With the RBI’s strong presence in the spot and forward space in the past 8-9months already resulting in $88-90bn fall in reserves, fresh inflows will provide a timely opportunity to rebuild defences. At the same, a strong bond issuance pipeline in 2HFY23 will bring focus back to incremental demand, resulting in a gradual yield puck-up, besides global drivers.