Concerns over systemic risks are increasing amid market disruptions and emergency interventions. A ferocious sell-off in gilts post the UK’s mini-budget, numerous interventions by central banks in supporting currencies, sharply rising CDS spreads for major banks—such developments point to elevated financial volatility and stresses. While disparate causes are at work, the volatility in rates, FX and credit can also be partially attributable to a common factor: extraordinary macroeconomic shocks causing stagflation, and the consequent policy response to them.

One key difference from other periods of stresses is that financial risks are now a consequence of macroeconomic instability, and not the cause. This seemingly creates a conflict between the Pavlovian expectation for central banks to ease given financial stress, and the need to fight inflation. In truth, the only sustainable way to reduce financial risks is precisely for policy to reinstate price stability via tightening. Targeted market intervention is the better option to tackle financial risks. How should interventions be handled? What should the decision criterion be? We think lessons can be drawn from the recent emergency intervention by the Bank of England (BoE).

The UK’s mini budget proved to be a traumatic blunder, with its chaotic aftermath resulting in active BoE crisis management. Even before the mini-budget speech ended on 23 Sep, a sell-off developed across GBP and gilts, steadily worsening with time. Due to a confluence of fiscal sustainability doubts and inflation risks, the cumulative 3-day jump in UK rates was extraordinary—30y yield saw a surge of 121bps, more than double in magnitude of a 50bps move, which is itself already an extreme right-tail event. 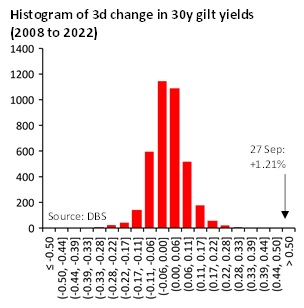 Unlike travails in EM markets, shocks in the UK bond market are serious as it is a systemically important market—the fourth largest globally, and the largest in Europe. Moreover, tremors from the sovereign curve also fall directly on the GBP corporate bond market, one which is almost as big as the gilt market. Since the budget, average GBP IG credit spreads had widened by 33bps, as pension funds were forced to offload assets after their LDI hedges were hit by the surge in rates. Global systemic risks are underscored when the surge in UK rates was also transmitted to the US Treasury market, which is a USD50trn behemoth underpinning global asset prices.

Risks of a negative feedback loop for UK pension funds hit by rising rates creates a policy conundrum between reinforcing inflation credibility and averting financial stability risks. BoE announced on 28 Sep that it will conduct temporary purchases of long-dated gilts until 14 October to stabilize the market, on top of providing a temporary collateral repo facility to ease liquidity.

Such actions inevitably generate confusion amongst market participants on whether the BoE is easing policy or conducting QE of sorts. Besides this, there is usual criticism of market interventions being unsustainable with a short-lived impact at best, and distorting price signals and inducing moral hazard at worst.

These issues can be reasonably circumvented if the Bank was to intervene as though it had a view to making an eventual profit, which gives rise to an optimal scale of intervention. Optimality implies that there is no harm to perceptions of the Bank’s inflation credibility and policy consistency, while pre-empting any risks of inducing moral hazard.

Generally, arguments about the futility of intervention are predicated on the markets being always right. In reality, market pricing could move excessively from equilibrium, such as when there are short-run dislocations, or large information asymmetry, or the presence of herd behaviour, amongst other factors. For BoE, its gilt intervention bought time for pension funds to liquidate assets while preventing a stampede. Such a stabilizing intervention that pushes gilt prices back towards equilibrium values should reap profits (eventually), and are quite justifiable for public institutions as they are uniquely positioned to withstand risk in such situations. While losses do not matter much for central banks indemnified by Treasury, profits or losses from market interventions can be a useful scorecard on their optimality. They can serve as a decision factor for scaling policy intervention when the need arises, without risk of compromising on price stability objectives.

On this admittedly narrow scorecard, BoE’s emergency intervention can be considered a success. It should be booking significant mark-to-market profits on its purchased gilts, with the 30y yield having eased from a peak of 4.99% pre-intervention to 4.78% last Friday, when intervention ceases. For such a powerful impact on financial stability, the total quantum of purchases has been relatively modest, with the Bank rejecting offers at low yields. With the government already rowing back on various mini-budget tax cuts, the BoE should be in good stead to liquidate positions for a profit when stability is attained.

Given rising financial risks, the conundrum of intervening in markets while simultaneously tightening policy could be confronted by others. In such instances, the public interest may paradoxically be best served by central banks’ market interventions being guided by their private interest, even though there is no actual profit motive at work for public institutions.

For the Fed in particular, calls to step down policy tightening could increase if there are financial accidents, as they are wont to happen during elevated market and rates volatility. Unfortunately, policy space is substantially limited given below neutral unemployment rate, above target inflation, and oil prices that still hover close to $100. Targeted market intervention should become an even more important tool during such times. Judicious asset purchases and rate-sensitive liquidity provisions could help safeguard financial stability, without necessarily impairing perceptions of monetary policy credibility.