BOK tightening is not over, but pace may slow

BOK tightening is not over, but pace may slow

The Bank of Korea announced a 25bps rate hike at today’s meeting, taking the benchmark 7-day repo rate to 1.00%. This is the second rate hike this year and in line with the consensus and our expectations. The BOK governor signaled that tightening is not over yet, saying that the current policy rate remains lower than the neutral level and is unlikely to constrain economic recovery. But he refrained from offering clues about the longer-term rate path, only saying that the possibility of a further hike in 1Q22 is not ruled out.

We consider the following reasons:

1) Inflation numbers are near a peak. In response to the recent surge in energy price inflation, the government has adopted a series of price stabilisation measures, such as lowering the fuel tax by 20% for six months and cutting the electricity bills for small merchants. South Korea has also announced to join the US, Japan and other major oil consumption countries to release crude from strategic reserves. We expect CPI to stay close to the current level of 3% in 1Q22, and then ease to 2% in 2Q-3Q22 and further to 1% in 4Q22. 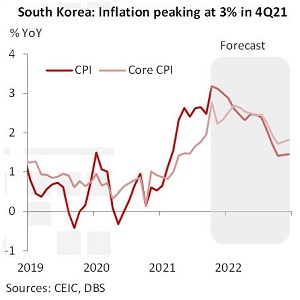 2) The property market is showing some signs of cooling off. The nationwide housing prices have maintained double-digit growth as of October. But the volume of apartment transactions has started to decline on a consecutive basis, and the growth of banks’ mortgage lending has begun to moderate. This should be ascribed to the rise in borrowing costs as a result of the BOK’s rate hikes, and the tightening of credit rules by the government (e.g., expansion of the application scope of debt servicing ratio and loan-to-value ratio). 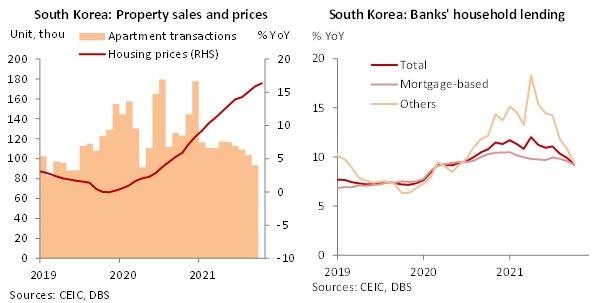 3) GDP growth is set to slow in 2022. Export growth is likely to ease in 2022 after the strong expansion this year, due to the slowdown of the Chinese economy – South Korea’s largest trade partner. The outlook for consumption recovery also faces some uncertainties. South Korea has moved towards “living with COVID-19” since the beginning of November. The number of new infection cases rose to about 4k on Nov 24, up from 2k on Nov 1. The occupancy rates of ICU beds reached almost 70% nationwide and 80% in the Seoul area. A sharper rebound in infections and greater stress in the medical system could prompt the government to re-tighten some of the COVID restriction measures. We expect GDP growth to decelerate to 2.8% next year, down from 3.8% this year.

Note that the 2022 policy outlook will be complicated by the presidential election scheduled on March 9. This election will be a close race between Lee Jae-myung, the candidate of the ruling Democratic Party of Korea (DPK), and Yoon Seok-youl, the candidate of the opposition People Power Party (PPP). Various polls show that Yoon currently leads Lee in the race (Realmeter: 44% vs 37%, Gallop: 42% vs 31%), but the gap is narrowing. There are still several months to go before the election. Voter opinions could shift between now and March.

Notably, the two presidential candidates differ on fiscal and real estate policies. Lee is inclined to maintain the DPK’s income-led growth strategy, which focuses on boosting household incomes and strengthening the social safety net. He will also likely continue to prioritize the government goal of bringing property prices under control. During the ongoing election campaign, Lee has pledged to give additional COVID-relief grants to households, and introduce a land holding tax to discourage the speculative activities in the property market.

In contrast, Yoon is likely to promote the PPP’s pro-business economic agenda. He has called for loosening of some 80 corporate rules to boost growth and create jobs. Fiscal policy will likely turn slightly hawkish if Yoon wins the election, which implies smaller amounts of government bond supply and lower upward pressure on the long-term yields. Meanwhile, Yoon has proposed to ease the excessive curbs imposed on the property market, including reviewing the comprehensive real estate holding tax and the capital gains tax on property transactions. The pressure facing the BOK to stabilise the property market via monetary policy tools could be lower under the scenario of a PPP win than that of a DPK win, in our view.

To market participants, today's BOK meeting gave little cause for them to reprice expectations of BOK's hike path yet. At the press briefing, Governor Lee did not provide much guidance or clarity on the timing of the next hike or the pace of hikes next year. Neither did he push back on current market pricing. Therefore, we expect front-end KRW swaps to continue to price for three to four hikes in 2022. In the following days, the domestic virus situation is likely to be more consequential. If daily new infection counts stay elevated, swap markets could take away as much as half a hike from current pricing. There is no change to our outlook for Korean Treasury Bond (KTB) performance. On duration, we expect returns to be largely driven by fluctuations in global yields, rather than shifts in BOK's stance. From a total return perspective, KTBs have underperformed against regional peers, recording year-to-date total returns of around -12%. Large Equity-related Portfolio Investment (PI) outflows by both locals and foreigners have weighed heavily on KTB performance.

Going into year-end, there could be some extent of stabilisation in KTB performance due to moderation of Equity PI outflows. Korean retail's buying of US stocks seems to be slowing. Foreigners have also switched to buying Korean stocks in November, after having sold for much of the year. As of end-August, the National Pension Service (NPS) has already hit its allocation target for overseas Equities and thus, outflows through NPS's portfolio changes may be lower in November and December. On duration, there would also be stepped-up support from the government to restrain bond yield volatility. They have announced KTB buybacks in November of KRW4.0tn, a much larger quantum than the KRW2.0tn in October and KRW0.2tn in July-September period.