Photo credit: Unsplash Photo
Russian military incursion into Ukraine, and the consequent imposition of sanctions by the West, have raised economic and geopolitical uncertainty for markets. We regret the outbreak of war, the loss of innocent lives, and hope that a peaceful resolution can still be attained. The immediate market reaction has been negative, as investors pare back risk globally, and credit markets are no exception. Indeed, the global growth backdrop has dimmed with the outbreak of war, on account of coming supply chain disruptions that will arise from sanctions and conflict, on top of soaring material prices. Between Russia and Ukraine lie a large share of global production of energy, wheat, base metals, precious metals, and noble gases crucial for the auto and semiconductor industries.
As for impact across economies and credit, Europe stands as the most exposed, being extremely dependent on Russian gas, and also possessing significant trade and investment links with both combatant states. Beyond this, there is a non-trivial chance of geopolitical risk premia becoming entrenched in Eastern European assets. Putin’s policy speech this week is a consequential one, decrying Soviet-era “mistakes” made over Imperial Russia’s former territories, including Ukraine. This should raise hard questions over Russian intent, and the nature of responses from the West. European credit spreads widened for both EUR IG and HY alike, deepening their year-to-date underperformance against Asian IG and HY USD credit, though a reversal was seen later in the session after Western sanctions were viewed as less severe. Both the iTraxx IG (+3bps) and Crossover (+18bps) CDS indices have surged towards mid-2020 highs, with investors pricing in growing risks of a slowdown and supply-side inflation due to the war, and heightened geopolitical uncertainty. In contrast, our Asian USD credit DACS indices have seen a smaller widening, and still stand below their late-2021 levels. 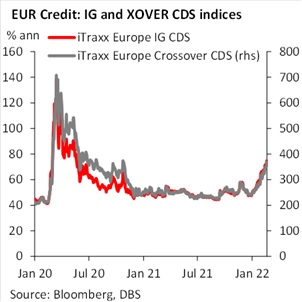 Despite overall Asian resilience, China HY property has been an underperformer this week. Negativity has returned on news that a prominent Chinese developer had missed its trust payments, despite previous indications that it was moving to bolster liquidity with asset sales. A subsequent rating downgrade by Moody’s to Ca1 triggered another round of selling in its USD bonds, as well as those of its peers. Sentiment remains fragile, and could remain so absent a rebound in Chinese property sales or a pick-up in the pace of asset sales.