8 Things to Know about Ang Bao

One of the most symbolic practices of the Chinese New Year festivities is ‘red packet’ ‘hong bao’ or ‘ang bao’ giving. For centuries, the Chinese have passed down this tradition of giving ang bao to their offspring. Today, it has evolved to not just giving it to your own children, but also to your younger relatives and juniors. With the Chinese New Year around the corner, here are some fun facts to know about the ang bao.

There are a few folklores about the origin of ang bao giving but here’s our favourite. One legend has it that there used to be a demon named ‘Sui’ that terrorised little children. To help an elderly couple save their child from the demon, the Eight Immortals, a legendary group of celestials in Chinese mythology, transformed themselves into coins and produced a blinding light, driving it away. The practice has then been followed on the eve of the Chinese New Year, where coins wrapped in red paper would be placed under the child’s pillow to ward off the demon. This was how the term ‘ya sui qian’, which is literally translated to “demon-suppressing money”, came about.

When it comes to ang bao giving, it is a socially accepted norm in Singapore that married adults are expected to give out ang baos to their unmarried relatives of the younger generation. This gesture serves as an act of giving blessings and well wishes to the younger generation so that they may have an auspicious start to the new year.

Over time, the culture of ang bao giving has also extended to become a way of expressing filial piety. For example, the ang bao is given to parents and grandparents to show your love and appreciation for them for raising you.

3. The Art of Ang Bao Giving: How Much Is Right?

Although ang baos are meant to be given as tokens of good wishes, there are actually a lot of intricacies involved in the ritual. This is largely attributed to the importance of “face” value among the Chinese that complicates the whole art of ang bao giving. If it happens that you gift ang baos that are smaller in monetary value than those handed out by your same-generation (tong bei) relatives, you “lose face”.

To help Singaporeans avoid this tricky situation, unofficial guides on the ‘right’ ang bao amount to pack have started appearing on the internet. Here is a general guide compiled from several sources.

One advice. While maintaining face value is all well and good, at the end of the day, it should be done within your own financial ability. Make sure you don’t ‘over-give’ an amount that exceeds your means.

4. Making Your Ang Bao as Auspicious as Possible

Chinese New Year is practically THE most important day of the Chinese culture. So, here’s a useful tip to help you create an abundance of auspiciousness during this festive celebration.

Prepare the value of your ang bao in even numbers, because of the Chinese saying that good things come in pairs. The number 8 has a similar pronunciation as ‘fa’, or ‘Huat’ in Chinese dialects, which suggests the idea of flourishing. So, if you want the recipient of your ang bao to prosper even more, you can give denominations that end with the number 8 (for example, $8, $18 and so forth). 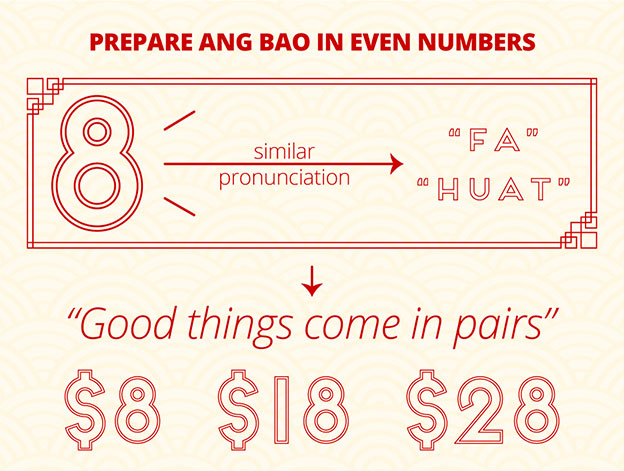 Much have been said about the art of ang bao giving. But, what about the art of receiving ang bao? While there aren’t as many things to take note of, there is one unspoken rule in particular that needs to be exercised diligently: DO NOT open an ang bao in front of others.

Checking out the ang bao for its contents is not only awkward for the giver, it is rude too. After all, it may create the impression that you are looking to count the amount rather than genuinely receive the blessings. Ultimately, it is the thought that counts. Even a $2 ang bao can come with a huge blessing, don’t you agree?

Ever wondered why there are long queues at the bank branches whenever Chinese New Year is drawing near? They are queuing for new notes for their ang baos. As the Chinese celebrate the Chinese New Year, It is a long-held tradition to start the lunar new year with most things new, such as new clothes, new shoes and thus new notes. A general rule of thumb is that ang baos should not be packed with notes that are wrinkled, dirty or look old.

There is a misconception that notes need to be freshly minted, which is not the case. As long as the note looks crisp and good as new, it will serve the same desired purpose.

7. Queue Early, or Play It Smart

Another important aspect about ang bao giving is in the preparation work. From choosing the design of your ang baos, to deciding how much to put into each packet, to visiting the banks to exchange for new notes, there are so many things to be done before this simple act of blessing can be carried out successfully.

Some suggestions on ways to get your new notes besides queueing at the banks. One convenient way is to get new notes from pop-up ATMs around the island. Find out the locations of POSB pop-up ATMs here. Another option is to reserve new and good-as-new notes online.

For those of you who dislike queuing, why not try the QR Ang Bao this coming Chinese New Year. Instead of putting cash into your ang bao, you can replace it with the QR Ang Bao card by loading the desired cash amount through DBS PayLah! With QR Ang Bao, it is tradition preserved, but enhancing it with much convenience for you. It’s also a good chance to show off to your millennial nieces and nephews how tech savvy you are. Be the first to check out this pilot from DBS Paylah!

8. Giving Ang Bao Is About the Human-To-Human Relationship

Since the old days of the demon ‘Sui’ till today, the tradition of ang bao is about giving your blessings in a little red packet. While in this digital age where it may have evolved into electronic versions like eAng Bao in China and QR Ang Bao in Singapore. Nevertheless, the true essence of ang bao giving has not changed since the days of old. It is still about the kinship that tie all of us together, and the bonds we hold dear to our hearts. 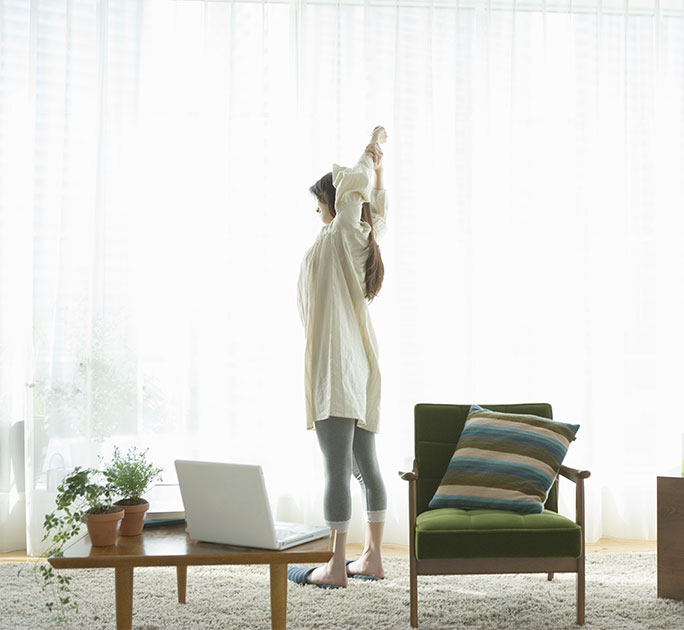 COVID-19: 5 ideas to keep you occupied at home

How to connect with loved ones online this Hari Raya