Reserve Bank of India and Bank Indonesia left rates unchanged but their path ahead is likely to diverge.
Radhika Rao10 Feb 2022

India’s monetary policy committee maintained a dovish bias on Thursday, keeping all benchmark rates unchanged. This compares with consensus expectations of a steady repo rate (4%) but a modest hike in the reverse repo rate (from 3.35% currently). The vote to continue with “the accommodative stance as long as necessary” was split at 5-1, with Prof Varma as the sole dissenter.

The central bank expressed concern over the absence of a broad-based recovery as well as short-term impact of the Omicron variant. Real GDP growth is seen at 9.2% in FY22, likely to return to FY20 levels, but reinforced that recovery was not firing on all engines, as the key private consumption component was still below pre-pandemic levels. Noting a loss in the near-term growth momentum (as reopening gains fade, we add), but support from the central government’s thrust on capital expenditure, stronger external trade performance, improving capacity utilisation rates and resilient agriculture, saw the RBI peg the FY23 growth projection at 7.8%.

On inflation, policymakers will see through firm readings in the Mar22 quarter (RBI: 5.7% average, DBSf: 6% average) and expect a pullback towards the mid-point of the target range in FY23. Softening food prices was highlighted as a key plus but hardening oil prices posed a risk. Existing slack in demand was expected to cap core readings, which along with moderating supply chain bottlenecks, allayed the MPC’s concerns over sticky inflation. Reflecting this view, headline inflation is expected to moderate from 5.3% in FY22 to 4.5% in FY23, with readings in the second half to return to the mid-point of the 2-6% target range. While strong inflation in the Mar22 quarter will also be partly due to base effects, market participants are likely to see upside risks to FY23’s forecast, as demand shifts from goods to services, price adjustments, and uncertain commodity price trajectory. 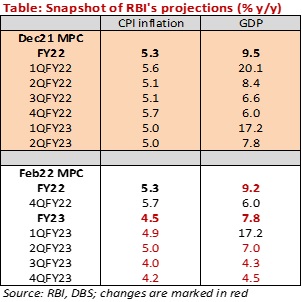 The policy communique was predominantly dovish. The central bank opted to keep rates unchanged, effectively seeing through firm inflation in the Mar22 quarter and expecting a pullback towards the mid-point of the target range in FY23. The absence of broad-based recovery further strengthened their resolve to maintain the status quo.

Year-to-date, the Indian rupee is in the middle of the AXJ performance ladder, down -0.5%/USD. Still, on a REER basis (trade-weighted 40 currencies), the currency is close to the one standard deviation, i.e., stronger than trading partners, adjusted for inflation. We maintain our call for the repo to be adjusted in 2H22 with risks of being deferred as Governor Das emphasised that any upcoming change in direction will be ‘well-telegraphed’. 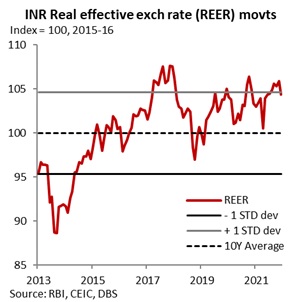 On liquidity management, the reverse repo rate was left unchanged, but few related announcements were made –
• Variable rate repo and variable reverse repo (VRRR) auctions of 14-day tenor will be the main liquidity tool
• Various tenors may be deployed as deemed necessary by the liquidity conditions
• Window (time) for fixed rate reverse repo and MSF has been tweaked
• On-tap liquidity facility for emergency and contact intensive sectors will remain till Jun22

Reinforcing expectations that the bottom of the rate cycle is behind us, the effective reverse repo rate, i.e., the weighted average rate of fixed rate reverse repo and the VRRRs of longer maturity is up to 3.87% in Feb22 vs 3.37% in Aug21.

Markets direction
Following the clearly dovish undertone in Thursday’s policy statements, 10Y INR yield pulled back, partly unwinding the jump in the wake of the Union Budget (India Budget: Capex-push and new priorities, modest consolidation). Recent auction cancellations (5Y and 14Y on 4 Feb, all issuances scheduled on 11 Feb) had already seen yields slip prior to the RBI decision. While the final quantum of gross borrowings might be lower on account of switches and higher collections by small saving schemes, nonetheless, demand-supply concerns continue to bog participants. The April meeting (marks the start of FY23) might give more indications on the demand mix and potential participation of the central bank (and banks) in the borrowing program. On a related note, the limit for foreign portfolio investors (FPIs) under the voluntary retention route (VRR) by INR1trn to INR2.5trn. To recall, this route, introduced back in Mar19, is free of macroprudential controls to enable long-term investment by foreign investors.

Bank Indonesia maintained the benchmark 7-day reverse repo rate unchanged at 3.5%, as widely expected. The move to normalise liquidity conditions has already been set into motion at January’s policy review, with the reserve requirement ratio likely to be dialled up to 5% in March and up another 1.5% by Sep22 (Indonesia’s monetary and fiscal policies to converge). The central bank has maintained that this move would not tighten but normalise conditions. The liquidity impact is also not expected to be adverse as ~IDR 200bn withdrawn through the RRR hike will be offset by the central bank’s burden sharing program this year and is much smaller than ~IDR 358trn injected via the bond purchases program by the BI in 2021.

Policymakers remain confident of the recovery prospects, maintaining their real GDP forecast at 4.7-5.5% for 2022 vs 3.7% last year, but remain wary over the spread of the Omicron variant. To recall, mobility curbs were tightened recently, in Jakarta, Bandung and Bali, with a weekly review likely to assess the evolving situation. On inflation, the 2022 target at 2-4% was retained. January inflation (Indonesia: Demand normalisation brightens outlook) firmed up to 2.2% yoy, back into the Bank Indonesia’s target range of 2-4% and fastest print since May20. Core inflation was up 1.8% yoy, firmest since 3Q20, fuelled by demand normalisation amidst easing curbs. Governor Warijiyo plans to assess inflationary risks from 3Q22 onwards and into 2023. Capital inflows back the BI’s forecast for a balance of payments surplus this year, even as the current account balance is seen returning to red of 1.1-1.9% of GDP. Commercial banks are being pursued to reflect lower benchmark rates and might be incentivised to lend to priority sectors. BI noted in the Jan22 monetary policy report that significantly smaller reductions in lending rates than deposit rates have increased interest rate spread and net interest margin (NIM) in the banking industry. Signalling higher vigilance, Governor Warjiyo outlined the bank’s plans to compare bank rate margins with neighbouring countries to make a case for further lending rate adjustments. Transmission elsewhere has been on track, with the overnight interbank rate and 1-month deposit rate down -25bps and -131bps in the year to Dec21.

With liquidity normalisation already set into motion in January, Bank Indonesia will bide time before tightening policy rates, especially as the domestic inflation trend is more benign than other emerging markets who have front-run the US Fed’s hike cycle. Besides, more data releases in the run-up to the FOMC’s March meeting will also dictate the scale/ extent of pricing of the US Fed’s policy moves. In the event of a frontloaded rate hike (50bp) by the US Fed next month, the BI might also consider bringing forward its rate adjustments to anchor sentiments, stabilise the rupiah and bond markets. Our base case is for 75bp rate hikes this year.

At home, the surge in Omicron cases in Indonesia also lends caution at the margin, but drawing from global experience, the impact is likely to be less adverse than previous waves. With an eye on US Fed’s hike path and domestic inflation, we maintain our 75bps rate hikes this year, with the start likely to be dictated by the extent of volatility in the global financial markets. The rupiah has underperformed regional peers on a year-to-date basis, but bond markets favour the domestic players – BI and commercial banks.