Indonesia is facing a strong resurgence in Covid cases, with the daily count at a fresh high of over 34,000 cases, more than double the previous peak in early-Feb21. Total cases have risen past 2.3mn, adding ~200k in the past week. 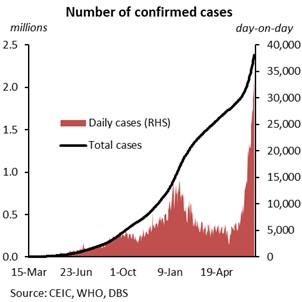 Jakarta accounted for a third of the national count; the most populous Java island made up two-thirds. The fatality rate (as a % of total) is low, but the pace of daily deaths has doubled vs the early 2021 wave. The more transmissible variant, Delta, is believed to be responsible for the re-steepening in the pandemic curve. 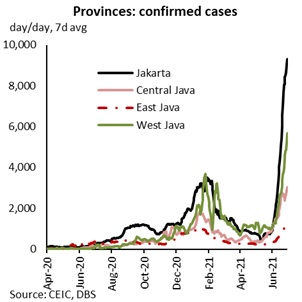 The sharp increase in the caseload is pressurising existing public health facilities, with the bed occupancy rate (BOR) for isolation patients in hospitals across the Java island in the 80-96% range, well in excess of the World Health Organisation’s threshold of 60%. The BOR varies across provinces, with Banten facing the highest rate, followed by DKI Jakarta (92.3%), Southeast Sulawesi (92%), West Java (89.6%) etc., according to thelocal media. 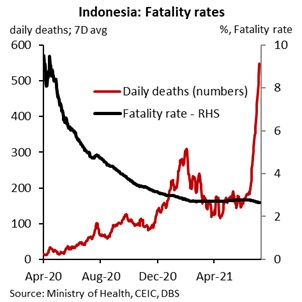 The government dialled up localised restrictions earlier this month, with emergency public activity restrictions (PPKM Darurat) imposed on the Java island and Bali for a start until Jul 20, which has since been expanded to the entire country. Regions have been classified into four zones, guided by intensity of the Covid transmission. These stringent restrictions are likely to extend into August until the daily case count peaks and begins to correct down.

Stricter guidelines include closure of malls, dining in was ceased, schools as well as public facilities have been shut. Movements will be dictated by whether occupations fall under the non-essential, essential, or critical sectors, with the latter allowed to work from office (energy, health, logistics, utilities etc.). Essential services will continue with 50% capacity whilst non-essential will shift to full work from home.

Prevailing testing ratios remain lower than most ASEAN counterparts, which is necessary to capture the true picture of the community spread at this juncture, to enable the track, trace, and isolate framework.

Tightened localised restrictions are beginning to take an economic bite, with Google discretionary and non-discretionary mobility indicators easing mildly from June’s highs (see chart). With a broadening in the PPKM Darurat rules, these are likely to slide further, withofficialssignalling that while historically a 30% fall was sufficient to reduce cases, but the onset of the more transmissible variant might require ~50% fall in mobility to effectively break the transmission chain. 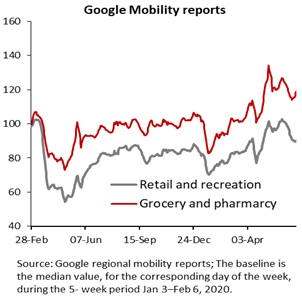 Monthly indicators will be released with a lag, with the slump in June PMI-manufacturing pointing to worry over the order pipeline, demand visibility as well as higher input prices. The data heatmap above provides an overview on the momentum in recent months. Consumption as well as investment interests are likely to come under a cloud under the new restrictions, particularly impacting the vulnerable informal sector, weighing on savings, employment, and income levels.

The government’s 2021 growth projection was lowered to 3.7-4.5% vs 4.5-5.3% previously, with public sector spending and exports seen as key thrusts whilst consumption remains under weather due to the pandemic waves.

A multi-country study by the OECD (March report) earlier this year shows that containment measures and fall in mobility are impacting growth to a smaller extent than the early stages of the pandemic last year, as businesses and residents have increasingly learned to adapt to restrictions and quasi-lockdowns. While this is likely to prevent economic activity from contracting sharply in midst of the ongoing movement restrictions, duration and severity of the pandemic curve will also factor into the extent of economic impact, which will be most evident in the 3Q sequential growth, where a deeper contraction is on the cards.

Bloomberg consensus expectation for Indonesia’s growth has been moderating, catching down with our conservative 2021 GDP growth forecast at 4% (30-50bps downside risks are emerging). Recovery hiccups and tepid inflation implies policy normalisation plans will remain on ice this year. On the fiscal end, even as the government seeks to maintain an expansionary bias, we don’t expect the -5.7% of GDP deficit target to be missed. Instead, rationalisation in existing spending heads are likely, for instance IDR26.2trn from the state spending and IDR6trn of regional transfers is said to be channelled into Covid support measures. Between Jan-Jun21, the fiscal deficit is well under control, totaling 1.7% of GDP. 2022 deficit is also likely to hover at the higher end of the indicative 4.5-4.85% of GDP. 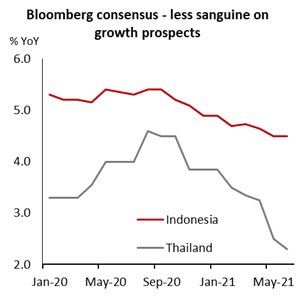 Encouragingly, the daily rollout of vaccines has jumped by 3x in the final week of June vs late-May and continues to average 700k into July. This improvement partly reflects the benefit from a shift in the procurement/ dispensation strategy, for instance allowing residents to now approach any clinic to receive vaccines regardless of domicile address etc. Onset of the fresh wave is likely to expedite demand, whilst supply continues to be ramped up. To reach a critical mass, the government intends to cover 181.5mn people by March 2022. As of July 7, about 50mn have received doses, of which 34mn have received one and 14mn are fully vaccinated (5% of the population). With respect to the procurement pipeline, the government has placed firm orders for 330mn doses (104mn have been received by Jun21, a mix of bulk, overfill and ready-to-use versions), with an additional option for 334mn and potential supplies of 664mn, constituting of China’s Sinovac, Novovac, supplies under Covax facility and Astrazeneca. Apart from the public sector rollout, the private sector initiative ‘Gotong Royong’ is also underway, with allocation of 20mn doses. When the latest wave ebbs, authorities will be cautious and guarded in reopening until vaccination achieves critical mass, which is necessary to build resilience against further outbreaks as well as return to a durable recovery path.