Recovery from the Covid pandemic is still not proximate, and gauges of growth are signaling weakening momentum, and yet many central banks are removing the emergency support measures in place.
Taimur Baig, Samuel Tse11 Oct 2021

Recovery from the Covid pandemic is still not proximate, and gauges of GDP growth are signaling weakening momentum across the world, and yet many central banks are removing emergency support measures in place. So far this year, monetary authorities in Brazil, Mexico, New Zealand, Norway, and South Korea have raised rates, while the ones in Brazil, Canada, South Africa, Indonesia, and UK are warming up. Why is this taking place? The answer is inflation, with the balance of risks tilting from growth toward price pressure, which is turning out to be longer-lasting than originally anticipated.

The trends are clear—manufacturers large and small are reporting a wide range of cost pressures, ranging from wages to inputs. Personal consumption expenditure related prices are up, at the core level, by over 3.5% in the US. Indeed, the core inflation projection for 2021 and 2022 will take the Fed very close to a 10-year average inflation of 2%, its target.

Visible around the world, but most clearly in the US, is the fact that the post-Covid world would be one of many disinterested or part-time workers, squeezing labour supply. Already, US hourly wage growth and unemployment rates have reached the same point (see chart below). 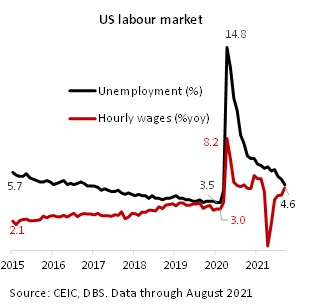 Businesses are gearing to raise prices, if not already in the act. Inflation may well have been higher if companies did not enter the cycle with comfortable margins, but that phase is ending, and further prices rises are coming. 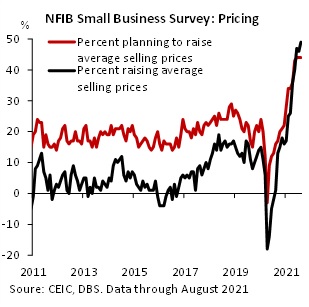 Oddly, all of these developments are taking place when the global economy is losing momentum, stretching from China to the US. This summer’s Covid infection resurgence slowed or halted reopening efforts, parts shortages have slowed down production (especially in autos and electronics), and power failures and price spikes are dampening consumer and investor sentiments.

A trip down stagflation memory lane

Our premise is that the global economy is no longer in a deep pandemic-related crisis, and hence there is no need for overly loose monetary policy. This is congruous with our view of higher rates. We are not flagging major stagflation risks though, a view that is based on our analysis of macroeconomic conditions in place during past episodes of stagflation.

In the 1970s and early 1980s, the US experienced several episodes of double-digit inflation and high rates of unemployment rate. These culminated in the Volcker moment in the early 1980s when the Fed funds rate was hiked to close to 20%. Subsequent recession caused USD rates volatility as the Fed hiked and cut in quick succession. The curve (as measured by the 10Y yield less Fed funds rate), swung from -600bps (inverted curve) to 300bps. 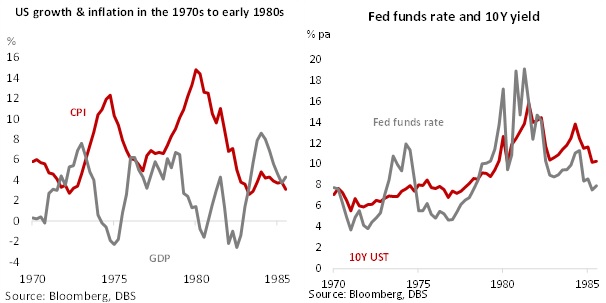 The subsequent three decades (1990s, 2000s and 2010s) were characterised by moderating inflation and lower rates. It was not until the Pandemic crisis hit in 2020 that supply-side pressures hit (in 2021), driving transport, energy and wage costs up. CPI has also hovered above 5% for several months, with inflation expectations also elevated. The upshot is that both survey-based and market-based (breakevens) are factoring rising price pressures, these have to be viewed in context. 10Y breakeven of 2.5% is high by recent standards (past ten years), but still a far cry from the 7% average seen in the 1970s/early 1980s. Moreover, the unemployment rate is already close to 5%, underscoring the rapid recovery in the labour market since the height of the pandemic in 1H20. A comparison of economic factors (see table) suggests that elevated inflation (more persistent than policymakers initially thought) in an environment of decent growth is still the most likely outcome. Structurally, decarbonisation and deglobalisation suggest that inflation would probably be higher than what we saw over the past decade. From a policy perspective, fiscal spending is currently even more aggressive (and pose the biggest risk for higher inflation) than in the 1970s/early 1980s. Meanwhile, we are not as worried about the pace of M2 growth, noting that the velocity of money has slowed and the surge in M2 is largely due to ongoing quantitative easing. Overall, we stand closer to the normalisation camp, than the stagflation camp.

The rebound in 10Y US yields from the recent low of 1.12% has been swift. 10Y yields are now at 1.60% as the summer doldrums got shaken off. We have nudged up our end-2021 forecast to 1.80% (from 1.60%), noting that there is still upside from the likely passages of the infrastructure and social spending bills (total likely watered down from USD4tn) later this year. In any case, major central banks across the world are withdrawing stimulus, dragging the centre of gravity for rates higher. Our 2Y to 5Y rates have been revised higher to reflect our view that normalisation could take place at a pace of 100bps a year in 2023. We still see cyclical curve flattening over the coming quarters as Fed hikes near. Note that our SGD and HKD rates have also been adjusted. 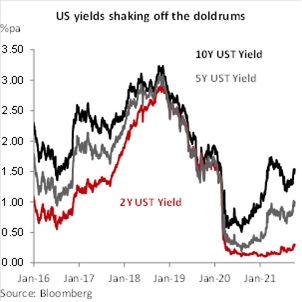 We think that upward pressure on 3Y to 5Y USD rates will become more acute than the 10Y. We prefer to pay on dips across tenors, seeing yields in the 3Y,5Y and 10Y as too low at 0.50%, 0.95% and 1.48% respectively. For SGD rates, we maintain that short-tenor SOR and SORA (out to 2Y) are too high compared to their USD counterparts.