Tea Ideas founder Jacinta Ong talks about how her social enterprise is striving to be sustainable even as they enlarge their social mission. 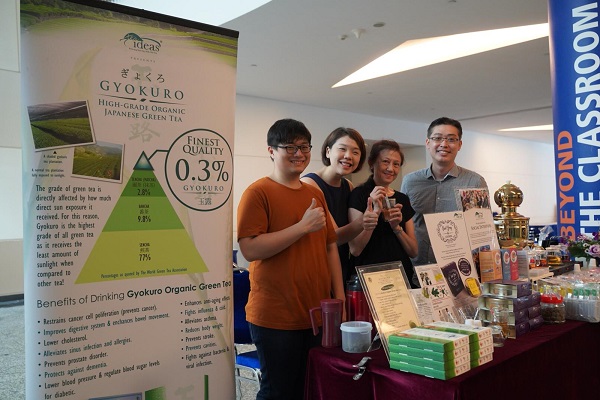 Brewing a healthy business
When Jacinta Ong decided to step off the corporate ladder to pursue something more meaningful after almost a decade working in retail banking, she never intended it to be a social enterprise. She was simply keen to do something in the F&B sector, which led her to setting up Tea Ideas in 2012, a business that would provide healthy tea products for consumers of all ages.

However, her heartfelt desire to help others lead healthier lifestyles extended beyond her company’s stable of innovative tea products, and manifested itself in the way she ran her business; including the types of people she wanted to employ.

From the start, Jacinta wanted to hire elderly people above 60 at Tea Ideas, as she believed this would help them stay healthy and stave off ailments such as dementia or chronic illnesses. These employees were be given flexible arrangements or shorter working hours to suit their lifestyles.

She was inspired to do this by the Japanese concept of ikigai: which translates into the reason for being, or the things that make one's life worthwhile. Jacinta later decided to also source for staff from patients suffering from kidney disease by tying up with the National Kidney Foundation. She got the idea of employing such patients as her own mother was a renal patient, and found it difficult to find a job after she was diagnosed. While the elderly staff start as store assistants and work their way up to a supervisory role, the younger renal patients take on sales or managerial positions.

For Jacinta, hiring these groups of people was part of her company’s broader mission to promote healthy lifestyles. What she did not realise then was that, over time, Tea Ideas had transformed into a social enterprise: a for-profit business with a social mission at its core. “I always thought that social enterprises were pure charities, but it turns out we were one as well!” she says.

Through working with these groups, Jacinta and her team have learnt to manage different types of people and adapt the way they operate to accommodate them. “Our group of aunties can sometimes be fixed in the way they do things, so we have to be respectful of their feedback when managing them,” she explains.

A hybrid franchise model
More recently, Tea Ideas rolled out a franchise programme to help Professionals, Managers and Executives (PMEs) who are unemployed. Unlike traditional franchise models with upfront fees to be paid, the company’s hybrid version allows franchisees to pay through instalments with the profits that they earn. So far, four PMEs have taken on franchises.

The company has continued to expand its social mission. It is currently working with disadvantaged children from Northlight School to train them as interns at Tea Ideas. The aim is to eventually employ some of them as full-time employees after they graduate.

Building sustainability
With its focus on making a positive social impact, Tea Ideas has found it challenging at times to grow into a sustainable for-profit business. This is especially so as the company keeps its prices relatively low so that its products remain affordable to the masses.

To overcome this problem, Tea Ideas rolled out a strategy this year to move into more premium products, that while still relatively affordable, will help to improve its profitability.

It is also focusing on working with one beneficiary group at a time, so that they have the sufficient time to develop and help growth the business. What Jacinta and her team has demonstrated is that a business can take bite-size steps towards making social impact while building a sustainable business.

She says: “We are passionate about all our beneficiaries but we cannot be overzealous. By focusing on one group we can help them find success before moving to the next one. It may take a longer time but eventually that is what will help us become a sustainable business.”

INNOVATIVE PRODUCTS
Tea Idea’s flagship products are Patented Tea Wands, which resemble sticks of candy and marry the convenience of a tea bag with the functionality of a teaspoon. Another of their offerings is Gyokuro Green Tea, which is offered in powder sachets to make this usually expensive product more affordable. The firm is now experimenting with tea-inspired desserts such as Ice Pops, Earl Grey Cookies and Diabetic Friendly Snow-skin Mooncake.

Tea Ideas was one of the many Social Enterprises featured at the DBS Marina Regetta 2019! DBS BusinessClass members can download the Social Impact Disrupt guide to find out more about how businesses can balance being a force for good and still continue to stay profitable.

Portraits of Purpose - “No time to waste” Read More

Portraits of Purpose - Seizing the opportunities amid challenges Read More